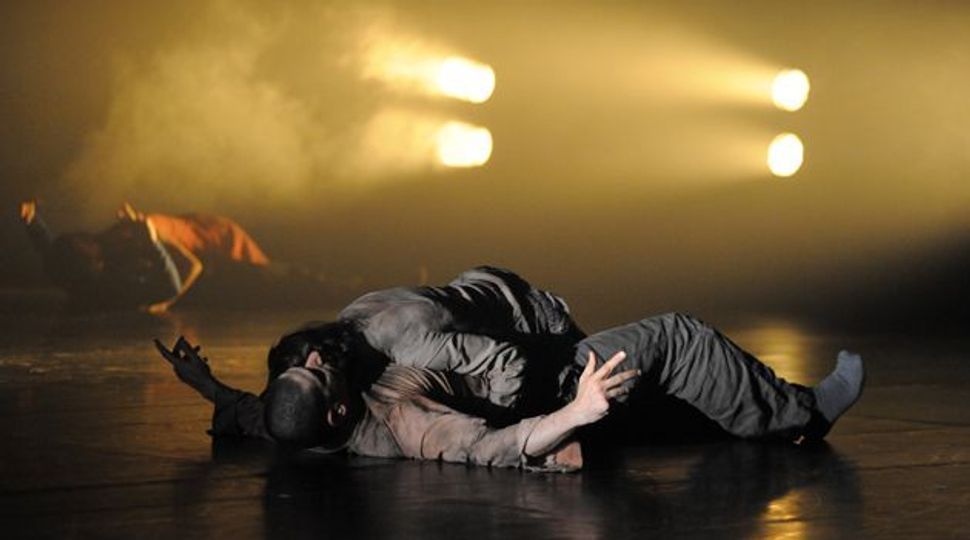 In the opening scene of Hofesh Shechter’s “Political Mother,” a lone man stands onstage, clothed in a pared-down version of Japanese Samurai armor. Soft choral music sets in. The warrior lifts his sword and proceeds to slowly pantomime seppuku, the ritual of honorable suicide. The lights cut to black; the music screeches to silence, and then, seconds later, startles the audience with loud heavy-metal guitars.

Shechter, an Israeli-born choreographer based in London, is familiar with dramatic scenes. His own rise in the world of contemporary dance over the past five years has itself created quite a stir. In England, he sells out huge auditoriums such as Sadler’s Wells and Brighton Dome. This fall, Shechter’s “Political Mother” will bring the artist’s provocative mélange of dance, music and physical theater to the United States, debuting at the Brooklyn Academy of Music in October, then moving to Minneapolis’s Orpheum Theater.

“With the backdrop of the upcoming American election, I think the piece will feel particularly current,” Shechter said. “It does not have a set agenda, but it does present situations that are full of tension. The physicality of dance makes you think about ideas directly and instinctually, more than you could in a verbal conversation.”

Shechter is a tall man with lanky stretched-out limbs. He has dark hair and a scruffy beard, and though he can look intense and intimidating, he is refreshingly open and unpretentious when discussing his work. “I am a long and stringy man, so I am very interested in fluidity in motion,” he said.

“Political Mother” transports its audience to a dark dreamscape where nightmarish rebellions are suppressed. The piece features bold characters: a politician orating before a crowd, a rock star screaming in rage; an ensemble of dancers who play villagers, prisoners and warriors. Dressed in street clothes, brown work-camp pajamas and medieval armor, these characters trade costumes throughout the piece, suggesting the similarities between captives and captors.

“We explored a variety of themes in the process, but we kept coming back to power and powerlessness,” said rehearsal director Bruno Guillore, a company dancer. “The push and pull between a government and its citizens is a timeless tale.”

“Political Mother” doesn’t have a clear narrative; its scenes flash on and off as if television channels are being changed. The piece starts out fast, with large sections of frenzied marches, runs and jumps.

There are short bursts of energy, staccato pauses. The rhythm eventually slows to allow for pensive, intimate portraits. Shechter’s greatest choreographic bravura often comes at the quietest moments, in the duets of dancers embracing and intricately interlacing limbs as they lift one another into the air. The soundtrack ebbs and flows from classical violin recordings to head-banging rock. Shechter composes the music for all his choreography, and the score of “Political Mother” features both live and recorded sections.

“I was a shy kid, and my first motivation to dance was social,” Shechter said of his background. “It was a way to get out of my shy bubble. I joined a youth folk dance group in Jerusalem, and I met people from all around town. I fell in love with the rush of performance, and how it pushed me to get comfortable with my body onstage. It wasn’t easy for me at first, but this challenge attracted me. It felt so good to finally be able to express myself freely.”

Shechter’s first training was in Israeli folk dance, and that influence shows in his movement vocabulary. In “Political Mother,” the ensemble struts and jogs in circling, weaving patterns. The dancers focus their eyes up to the sky and down to the ground, praising the heaven and the earth.

Shechter trained and performed with Batsheva Dance Company, led by Ohad Naharin. He describes his stint with Batsheva as “a fast train of education in a condensed amount of time.” Shechter shares Naharin’s raw, animalistic movement quality, but his work focuses more on specific, tangible imagery and less on abstract deconstruction. After dancing with Batsheva, Shechter studied in Paris at the Agostiny College of Rhythm and also played drums in several rock bands. His particular passion for music, especially percussion, allows his art to push past traditional genres. In 2008, after a series of choreographic projects, Shechter founded his own company in London. He said he is energized by the city’s multiethnic landscape, and his work is urban and youthful. “Political Mother” is decidedly gritty, more like a warehouse rock show than a movement study on a concert stage.

“Political Mother” will have the opportunity to expand Shechter’s audience even further in December, when he ends this year’s tour in Qatar, marking the first time Shechter’s work is performed in an Arab country. “I don’t know what to expect,” Shechter said. “I always say, in essence, politics divides people and art connects people. I’m always happy when art wins.”

Stacey Menchel Kussell is a culture writer. Her most recent articles have examined Israeli contemporary dance. Hofesh Shechter’s ‘Political Mother’ will be performed at BAM October 11-13 and at the Orpheum in Minneapolis on November 13