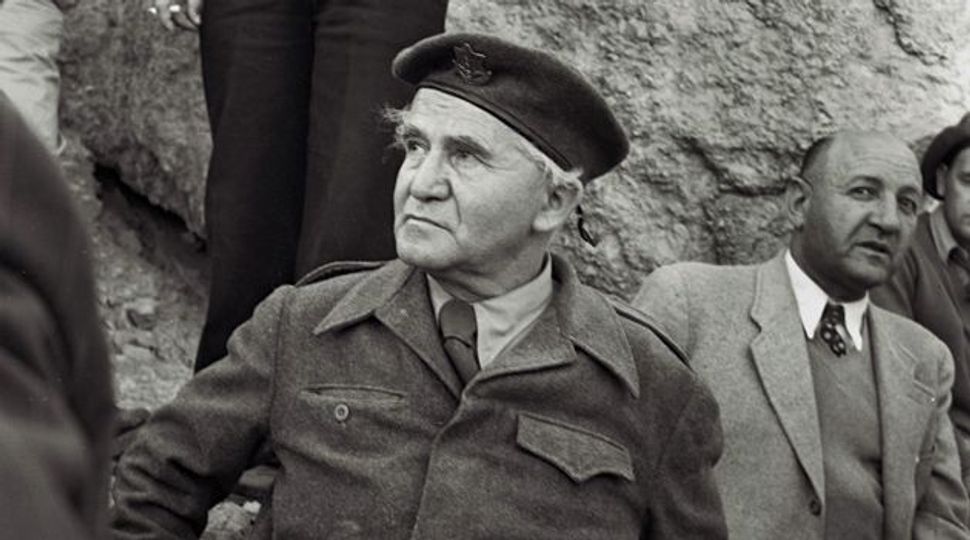 Sabra Standard: In a new book Patrick Tyler argues that David Ben-Gurion and many high ranking ?sabras,? native-born Israelis, have damned Israel to live in turmoil through their militancy, land hunger and provincialism. Image by getty images

Fortress Israel: The Inside Story of the Military Elite Who Run the Country — and Why They Can’t Make Peace
By Patrick Tyler
Farrar, Straus and Giroux, 576 pages, $35

Veteran Washington Post and New York Times journalist Patrick Tyler has written a comprehensive, well-researched 500-page survey of Israel’s encounters with war and peace from 1948 to 2011. It would be a useful read if the author didn’t nurse a seriously skewed ideological agenda about Israel. Tyler would have us believe that the country has endlessly missed glowing opportunities to translate military victory into peace agreements with its neighbors, and that this failure is attributable to the sabras, or native-born Israelis, whose militancy, land hunger and provincialism have, almost alone, damned Israel to live in turmoil.

Tyler touches on virtually every war-and-peace effort on record. He enriches his mining of secondary sources with many interviews. His characterization of Ehud Barak, who “stood alone as the architect of his own failure,” is spot-on. Serious factual errors are few, although someone should have explained to him not to discuss “the Mapai” and “the Mapam” as if they were “the” Likud. Few important developments are completely left out, although one serious lacuna is the total absence of Gunnar Jarring’s peace mediation effort, sponsored by the United Nations, following the 1967 Six Day War.

But why the sabra militancy fixation? Tyler’s determination to prove that native-born Israelis, along with founding father David Ben-Gurion, consistently ignored or closed openings for peace and plunged Israel into needless wars places his book, unfortunately, in the rapidly growing category of uninformed Israel-bashing treatises by the likes of otherwise respectable scholars and statesmen such as Stephen Walt and John Mearsheimer, and Jimmy Carter.

Of course Israel has missed opportunities to negotiate with its neighbors. And it has indeed on occasion launched unnecessary and harmful military operations. It has long had its hawks and its doves, and both have made mistakes, not just the hawks. Nor are all hawks “sabra militants” or all sabras hawks.

When Israel’s leaders in war and peace don’t fit Tyler’s mold, their record is simply brushed aside. For example, so locked into stereotyping is Tyler that he is at a loss to explain the behavior of Mossad head Meir Amit in 1965.

Amit, with his “sabra loyalty” to “the sabra code as [Moshe] Dayan practiced it” and to “the sabra military establishment” and the “sabra impulse for war,” mustered the audacity to propose to “hand-wringing consensus builder” (and nonsabra nonmilitant) Levi Eshkol, then prime minister, that Amit pay a visit to Egypt to launch a peace initiative. Eshkol rebuffed Amit and vetoed the initiative. Nor can Tyler explain why Prime Minister Golda Meir, she of Kiev and Milwaukee origins, repeatedly rejected Anwar Sadat’s peace advances prior to the 1973 Yom Kippur War. And Tyler ignores Israel’s entreaties to Jordan’s King Hussein on June 5, 1967, not to enter the Six Day War.

How does Tyler explain Shimon Peres’s stewardship of the Dimona nuclear project and his own sympathy for the early West Bank settlement movement? “The effete Europeanist played poker like a sabra!” Of course.

Tyler is so preoccupied with “sabra militarism” that he ignores or seriously downplays virtually any competing input to Israel’s wars and the Jewish state’s peace failures. He can’t accept that Israeli strategists might have been genuinely motivated in their decisions by Arab absolutism and real Muslim intolerance of Jewish statehood. That Yasser Arafat really may have been an unreconstructed terrorist and compulsive liar at heart. That Greater Land of Israel advocates like Menachem Begin and members of the settler movement sought to expand Israel’s frontiers not out of militarism, but because of religious ideological motives that actually contradict Israel’s security interests. That the Palestinians — as non-sabra, non-hawk Abba Eban once remarked — “never missed an opportunity to miss an opportunity.” That Prime Minister Ehud Olmert and Defense Minister Amir Peretz flubbed the 2006 war in Lebanon precisely because they lacked the necessary military-strategic background for maintaining Israel’s security.

Tyler even misses the huge strategic significance of Mahmoud Abbas’s rejection of Olmert’s far-reaching two-state offer of 2008: that even a moderate, nonviolent Palestinian leader can’t make the compromises necessary to end the conflict.

“Martial culture,” “covert machinations of a chekist apparat” — Tyler just can’t let go of his fixations. His book would have been better served by a more balanced approach.

Yossi Alpher has spent most of his adult life in or near the Israeli security establishment and has produced three sabra children who emerged from military service on the dovish side of the scale. He is a contributing editor to the Forward.