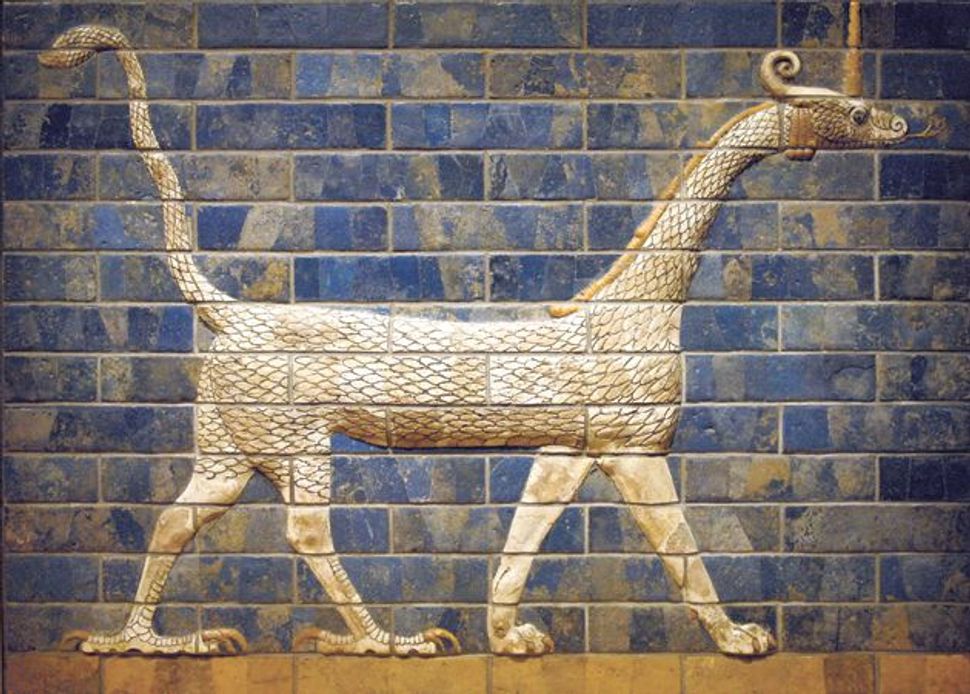 As often as we read these words, which we do every Simchat Torah when beginning the annual Torah-reading cycle again, they never lose their majesty or their mystery, in their English translation as in their Hebrew original. What their translation contains no hint of, though, is something that, with the help of linguists and historians of the ancient Near East, may partially explain this mystery. Behind the account in Genesis of a solitary God creating the universe by Himself lies, it would seem, an old pre-Hebrew myth in which the world was created by many gods who battled with each other while creating it.

This hint is found only in the Hebrew, in the word tehom, translated in the King James Version (as it is by most other English Bibles) as “the deep.” Inasmuch as tehom is a word that occurs many times in the Bible, always — to judge by the context — in the sense of watery depths, this translation is not to be challenged. (In Modern Hebrew, mey tehom, “the water of tehom,” refers to all underground water.) It was only in the late 19th century, however, as archaeologists and scholars began to discover and decipher ancient Mesopotamian cuneiform inscriptions, and with them the mythology of the long-vanished Babylonians who wrote them, that an interesting similarity was noticed between the word tehom and the female Babylonian deity Tiamat, who figures prominently in Babylonian creation legends.

Tiamat, the goddess of salt water, along with Apsu, the god of sweet water, are the two original deities in Babylonian cosmogony, from which everything else came into being. In the words of the Babylonian “Poem of Creation,” whose composition probably dates to the 12th-century B.C.E., although the myths it retells are much older: “When there was no heaven, no earth, no height, no depth, no name, when Apsu was alone, the sweet water, the first begetter, and Tiamat, the bitter water… when there were no gods, when sweet and bitter mingled together — no reed was plaited, no rushes muddied the water — the gods were nameless, natureless, futureless — then from Apsu and Tiamat in the waters gods were created, in the waters silt precipitated.”

Apsu impregnates Tiamat with the gods of the Babylonian pantheon, and these gods soon begin to quarrel in the womb. “Discord broke out among the gods, although they were brothers, warring and jarring in the belly of Tiamat…. Apsu said: ‘Their manners revolt me. My will is to destroy them, all of their kind.’ When Tiamat heard this, she was stung, she writhed in lonely desolation, she said: ‘Why must we destroy the children that we made?’”

Apsu prevails, and Tiamat agrees to destroy her children, the gods, who by now have been born. Yet the gods get wind of the plan, kill Apsu before he can kill them and plot to murder Tiamat, too. Defending herself, she takes the form of a sea dragon and creates 11 sea monsters to protect her. The bravest of the gods, Marduk, goes forth to do battle with her and enlists a powerful wind to aid him. It “beat [Tiamat] in the face, so that when her mouth gaped open to suck [Marduk] down, the wind raged through her belly, which swelled tumescently. She gaped. And now he shot the arrow that split the belly, that pierced the gut and cut the womb… Tiamat was dead, her band routed.”

What, you ask, does this gruesome theomachy have to do with the sublime creation story of Genesis? Not very much perhaps — except that the Hebrew word ru’aḥ , usually translated in Genesis as “spirit,” has the primary meaning of “wind.” Was God’s spirit that mysteriously moved upon the face of the waters originally Marduk’s wind howling in the face of Tiamat? Is Genesis’s description of the universe at its inception, before the creation of light, a radically reimagined, reworked and de-mythologized rendering of the Babylonian legend, one in which primal matter is no longer represented by gods, and where monotheistic grandeur replaces polytheistic savagery?

It’s actually quite possible, especially since there is strong evidence that the story of Tiamat, or something close to it, was known to the Israelites of biblical times. Consider, for example, the verse in Chapter 74 of Psalms in which the Psalmist says to God, “Thou didst divide the sea by thy strength, thou didst break the heads of the sea monsters [taninim] in the waters.” Although nowhere in the Bible is there any actual recounting of such an episode, it is clear that a tradition about God having subdued the forces of the depths at the time of Creation existed in Hebrew circles, too. Between the tehom of Genesis and the Tiamat of the Babylonians came long centuries of intellectual religious development, but a connection between the two is highly likely.