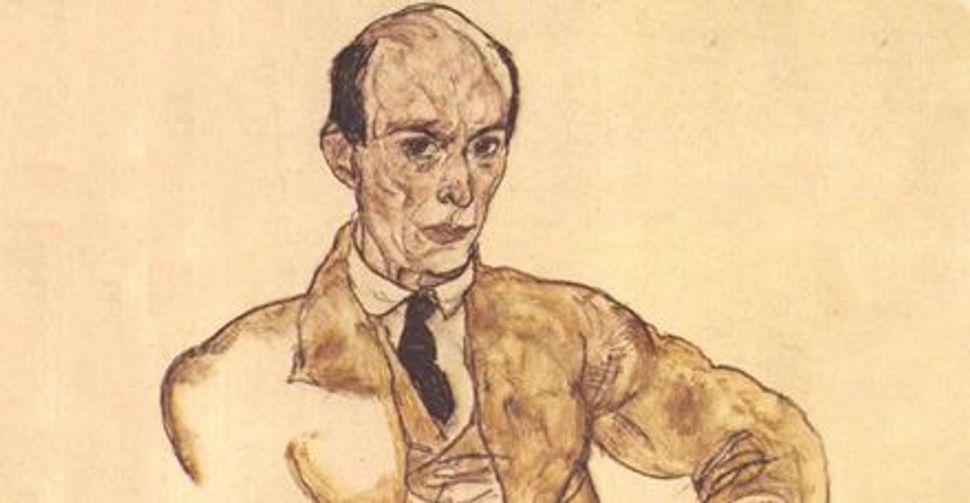 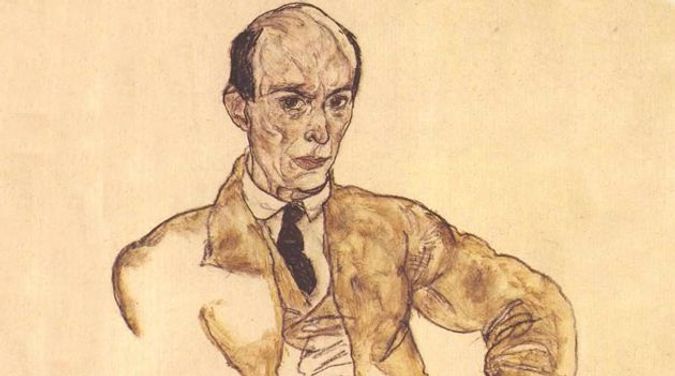 Moonstruck Composer: Schoenberg was the subject of this 1917 Egon Schiele painting. Image by Wikimedia commons

This October marks the centenary of one of the oddest landmarks in music history. One of the most influential works ever, it remains knotted in paradoxes. The composer was a Jew who at the time insisted he was Christian; but not very long after this disavowal emphatically re-embraced his Jewish heritage. The work mocked religion — specifically the Mass — but was nothing if not spiritual. It transfixed audiences; but disturbed some listeners enough for them to shout for the composer to be shot. It was abstruse music; but was performed as if it were cabaret.

The words were not sung; but they weren’t quite spoken, either. It used French poetry, but could not seem more Germanic if translated into German. It was obsessed with numbers and numerology and order; but shocked listeners with the breathtaking freedoms it demonstrated. Stravinsky, Ravel, Puccini, Strauss and Gershwin were among the composers who attended its premiere performances and began to incorporate many of this music’s ideas in their own works. Even after 100 years, it retains both its impact and its strangeness.

Arnold Schoenberg was self-taught and full of contradictions. Gustav Mahler found the younger composer in equal measure fascinating and infuriating. Their tempestuous friendship often found both men breaking off conversations, vowing never to speak again, only to find themselves eager to restart the conversation anew. In 1911, just months after Mahler’s death and the year before “Pierrot,” Schoenberg published his “Theory of Harmony” (Harmonielehre), dedicated to Mahler’s “hallowed memory.” But he also cited Otto Weininger, the notoriously misogynistic, self-hating Jew who committed a spectacularly public suicide at age 23, just after publishing his influential book, “Sex and Character,” which embraced Wagner’s claim that the “Aryan” race was being destroyed by cross-breeding with “parasitic” Jews.

Yet this shockingly original “Pierrot” — whose hero refers to the classic namesake commedia dell’arte character of the trusting fool, historically often used as a representative of the artist in society, something like the Yiddish luftmensch — was a product of the very ideas espoused in this “Theory of Harmony.” It could be — and was — viewed as decadent but also avant-garde and confrontational. Newspapers reporting its world premiere quoted Igor Stravinsky (not long before the premiere of his own epoch-defining “Rite of Spring”), who lauded Schoenberg as “one of the greatest creative spirits of our day.” Even decades later, Stravinsky, who kept his “Pierrot” premiere ticket and concert program for the rest of his life, judged the work as “the solar plexus as well as the mind of early twentieth-century music.”

“The wine we drink with our eyes / pours down in waves nightly from the moon.” The surreal kiddush that begins “Pierrot” is the first of many parodies of the Christian Mass that scandalized German audiences — though not the French, who were used to such blasphemy. It is introduced by a seven-note theme on the piano, accompanied by plucked violin. This motif recurs in various guises throughout the cycle and immediately plunges us into a moon-drunk realm, maddeningly neither tonal nor atonal. In fact, the seven-note motif is heard in so many variants, the mere use of any block of seven notes comes to recall this theme.

Beyond this trope on the number seven, the intricacies of formal ideas and numerical relations in “Pierrot” are positively Talmudic, and they have provided generations of scholars with tempting fodder. This numerology-obsessed composer had a lifelong anxiety over the number 13 — he often avoided having a 13th measure in his scores by labeling it “12a.” He re-spelled “Aaron” in the title of his opera, “Moses and Aron,” to keep from having a title with thirteen letters. He was convinced he’d die on a Friday the 13th (he actually did, but not until 1951). “Pierrot” is the one work in which he embraced that number. He could hardly have done otherwise, as all of Giraud’s poems in this book have 13 lines — standard poetic rondeau form. Schoenberg selected 21 poems (it was his Opus 21, after all) out of the 50 in the original book and divided them into three groups of seven. The first seven songs deal with Pierrot’s moon-sickness; the second seven present him as victim and martyr; and the final seven attempt to provide resolution.

“In the early 1920s,” Alexander Ringer wrote in his remarkable book, “Arnold Schoenberg, The Composer as a Jew,” “‘Pierrot Lunaire” was the focus of many a reactionary, if not outright anti-Semitic, attack on Schoenberg, possibly because, more than any other work, it pushed the Wagnerian aesthetic well beyond the point of no return.”

Schoenberg’s worship of German culture was apparent in his boast, upon inventing his twelve-tone serial system, that he had “discovered something which will ensure the supremacy of German music for the next hundred years.” But a decade later, as he began to confront the first glimmerings of Nazi nationalism, he wrote, “Nationalistic musicians regard me as international, but abroad my music is regarded as too German. National Socialists regard me as a cultural Bolshevik, but the communists reject me as bourgeois. Anti-Semites personify me as a Jew, my direction as Jewish, but almost no Jews have followed my direction.”

Schoenberg had grown up with very little knowledge of Jewish tradition, though from youth he had been a student of the Bible — Luther’s German version. Around the time Mahler converted to Roman Catholicism (a requirement to be director of the Vienna Opera), Schoenberg converted to Lutheranism (which would be of no such professional help in Catholic Vienna). The more he encountered anti-Semitism, however, the more he came to embrace his Jewish heritage.

One of Schoenberg’s biggest fans at the beginning of his career was the Russian painter Wassily Kandinsky, who hailed the composer as his artistic soulmate and even included Schoenberg’s paintings in his famed Blaue Reiter group shows.

One critic had described the “Pierrot” premiere as “only a series of points, dots, dashes or phrases that sob and scream, despair, explode, exalt and blaspheme.” With the exception of the “blasphemy,” this could easily describe Kandinsky’s paintings, too. A decade later, though, when Mahler’s widow, Alma, alerted Schoenberg to how anti-Semitic Kandinsky was, Schoenberg broke off their friendship.

George Gershwin was a fan of “Pierrot.” He attended both its American and French premieres and even painted a portrait of Schoenberg. Later, when Schoenberg moved to Los Angeles in 1933 to escape Austria, Gershwin became his weekly tennis partner. (When Gershwin died suddenly, four years later, it was Schoenberg who delivered the moving eulogy for him on national radio.)

In 1938, Rabbi Jakob Sonderling, of the Reform Fairfax Temple in L.A., commissioned Schoenberg to compose his “Kol Nidre” for that year’s Yom Kippur service. The composer seized the opportunity to make a statement about his Jewish identity and the prayer itself, a kabbalistic melodrama of the unity of God’s identity and defense against apostasy and forced conversion. True to form, Schoenberg researched the history and all versions of the prayer, and created his own version. (The Israel Philharmonic Orchestra will perform this rarely heard work at Carnegie Hall on October 25.)

Only a month before Kristallnacht, and the same month his “Kol Nidre” was performed, Schoenberg wrote his “Four-Point Program for Jewry,” a passionate attempt at a political program for world Jewry: “Is there room in the world for almost 7,000,000 [Jewish refugees]? Are they condemned to doom? Will they become extinct? Famished? Butchered?” But this essay raised more questions than it could solve. Most troubling, the essay advocates political methods not dissimilar to those Hitler used to achieve power — although in the service of far more admirable goals, including the establishment of a Jewish state. The copy sent to Thomas Mann evoked such alarm over the political methods it advocated, it inspired him to write “Doctor Faustus,” about a composer, obviously modeled on Schoenberg, who not only sells his soul to the devil in order to achieve musical mastery but also represents the evils of German culture and deliberately infects himself with syphilis, to boot. “You have to know I never had syphilis!” Schoenberg was once overheard screaming at a woman in an L.A. supermarket.

In 1947, after the horrors of the Shoah were exposed to the entire world, Schoenberg used many of his “Pierrot” musical innovations to create what is probably the most powerful piece anyone has composed on the subject of the Holocaust, “A Survivor from Warsaw,” which ends with the chorus of Jews struggling to recall the Shema Yisrael prayer at the doors of the gas chambers.

True to Schoenberg’s contradictory spirit, at the end of his life, when the State of Israel was established, he proposed himself not only as the director to create a new music conservatory in Jerusalem but also, seemed to imagine himself as a modern Moses, a composer-priest creating a new religion in sound. This Jew was a moon-drunk Pierrot, indeed.

Raphael Mostel is a composer, writer and lecturer in New York City.