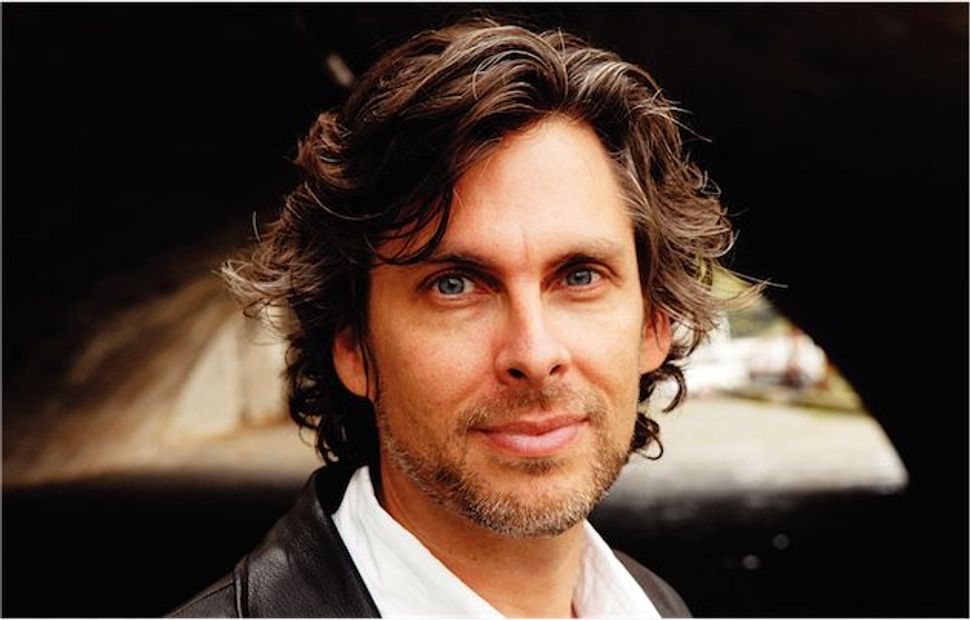 Street Walker: When he walks down a street, Michael Chabon says he feels as though he?s walking through time. Image by Ulf Andersen/Getty Images

Even for a particularly verdant block in Berkeley, Calif., Michael Chabon’s home is an oasis amidst the university town clatter and clutter. The brown-shingled house is situated on a flowery patch complete with a wooden fence, a warm front porch and a bouncing Labradoodle named Mabel, who happily charges to the gate to greet visitors.

Inside, however, life is a little less than idyllic at the moment. Chabon is in the kitchen, making his sick son a grilled cheese sandwich, and his wife, novelist Ayelet Waldman, can’t shake hands because she also has a severe cold. An assistant wonders aloud if it just might be West Nile virus, and two heavy-footed men shout directions to each other as they clumsily attempt to move an audio system from one room to another. “We’re going to infect you,” Chabon tells me, somewhat sadly.

This has been Chabon’s home for over 15 years, the longest he’s ever lived in one place since his first real home, as a child, in Columbia, Md. The legendary Telegraph Avenue is only a few blocks away, and it’s also the title of and setting for Chabon’s latest creation. “Telegraph Avenue,” whose main characters include a Jewish couple and an African-American couple, is a dense novel packed with genre nods and dizzying themes, from race relations and blaxploitation films to filial responsibility and forgiveness. But for Chabon, the premise that grabbed him years ago, when he first wandered into a nearby record shop, was a sudden sense that, after many years living as a nomad, he had returned home — to the home of his youth.

“The two guys working there that day were a black guy and a white guy, and the customers who were hanging out were black people and white people,” he explains. “I had just walked into this little microcosm of everything I love most about the East Bay.” At that time, in the late ’90s, Chabon had been casting around for a television idea. The record shop struck him as a great setting for a show — but it also cut deeper on a much more personal level. “There was something beautiful and magical about the record store on that day,” he says. In fact, it reminded him of Columbia, Md., a melting pot of a planned community where his parents moved with him at age six. “My parents chose Columbia in part because they believed in the vision it offered of an interracial, interfaith space.”

The television pilot Chabon wrote based on the record shop never took off, but he says the four main characters he created (Archy and Nat, the vinyl shop owners, and Gwen and Aviva, the midwives) stayed with him over the years. And the longer he lived in Berkeley, the harder it was for him to let go. “I kept having fresh encounters, meeting people and learning about the history of this area and thinking, ‘I could have used that,’” he says. “At some point, I just thought, ‘Why don’t I?’ It had been a long time since I had written a novel set in the present day or that’s more or less about real people.”

Chabon wanted to write “Telegraph Avenue” as if he had been living in Berkeley for generations. He says his nomadic life in early childhood and young adulthood actually served him well. “I think I have a skill in rooting myself quickly in a place and learning how to think and feel as if I had always lived there, or as if I had grown up there to quickly get ahold of all that necessary information and knowledge, including the past and the history of a place.”

When Chabon walks down a street, he says he feels as though he is walking through time: always looking to peel back the layers of what came before, always seeking longtime elderly residents in order to hear their stories.

Writing intimately about Berkeley back in the day turned out to be the least of his challenges in writing “Telegraph Avenue.” This is the first time Chabon has written extensively from the African American and female points of view, and he really delved into the details of midwifery.

“A part of me is always saying, ‘What do I know [about being black or female]?’” says Chabon. “But I trust my imagination at this point. I’ve been using it for a long time, and I’ve been paying attention to how people talk and what people say and how they look and what they do for a long time.” He decided to write about midwifery because, ultimately, it naturally has more “life and death” consequences than two guys completing daily tasks in a record shop. “It’s weighty, grave work, and that really appealed to me.”

One scene that came quickly and organically for him was the appearance of Barack Obama, who pops up at a political fundraiser in the book. Likening Obama’s appearance to a crossover character in fan fiction, Chabon says his idea to put him in his novel was a “no-brainer.” The novel is set in 2004, soon after Obama’s keynote Democratic convention speech.

“[That speech] was moving to me in a very particular way, because what I heard him talking about was Columbia, Maryland,” he says. Chabon says he was deep in the writing of this book when it hit him that he had to include Obama. “The deepest underlying motivation for this whole book was this experience of having grown up in this dream. I knew right away he belonged in this book, that he was perfect. He was just one more way to evoke this utopian vision.”

Chabon is currently developing an hour-long drama series with his wife for HBO. The script focuses on World War II espionage and stage magic. But he just may have the kernel of another idea. As he sits at his kitchen table, one of the workers moving audio equipment slams something to the ground and yells something unintelligible. “I think this is my next novel,” Chabon whispers.

Kristin Kloberdanz writes often for Time and the Chicago Tribune.