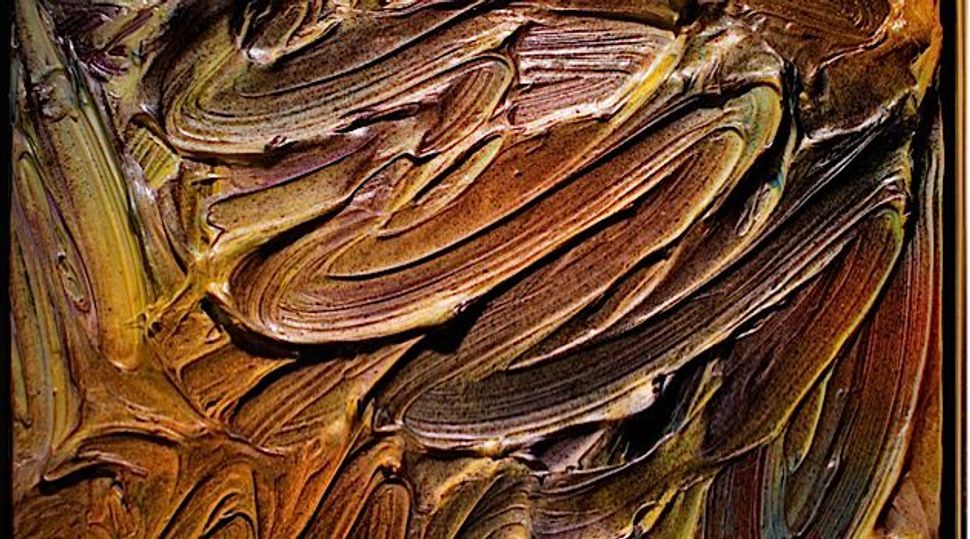 It’s hard to explain the feeling one experiences when standing in front of, and contemplating the dynamic movement in, Jules Olitski’s paintings. Picture a beautiful yet quickly fleeting vision of creamer diffusing throughout a cup of coffee. If one freezes the frame when the cloudiness is at its height — just before the dairy explosion mixes fully with the coffee and becomes dull and monochromatic — you might begin to imagine the forms in some of Olitski’s paintings from the 1980s and ’90s.

Olitski was born Jevel Demikovsky in present-day Ukraine in 1922, grew up in New York City and later lived and worked on Bear Island in New Hampshire. He died in February 2007.

A selection of small works, “Jules Olitski on an Intimate Scale,” is being exhibited at George Washington University’s Luther W. Brady Art Gallery, and “Revelation: Major Paintings by Jules Olitski” opened on September 15 at American University’s Katzen Arts Center, in Washington, D.C., after stints in Kansas City, Mo. (where it premiered); Houston; and Toledo. It will travel to the Naples Museum of Art in Florida in early 2013.

It’s impossible to talk for long with those who knew the artist well — such as his wife of 30 years, Kristina Olitski, and his daughter, Lauren Olitski Poster, a painter — without hearing about how much Olitski read both secular and religious texts. During a panel event at The Phillips Collection in D.C., E.A. Carmean Jr., one of the curators (along with Alison de Lima Greene and Karen Wilkin) of “Revelation” spoke of Olitski’s “vast reading and comprehension.” Particularly when it came to titling his works, the artist wore his Jewish identity on the sleeve of his smock.

“Shekinah Light” (1990), which is on view at G.W., was one of the works that inspired the curatorial staff at the Brady Gallery to take to the social network Pinterest to create a glossary of some of the artist’s more obscure references. The Hebrew word shekinah is a feminine term for God’s transcendent presence, which doesn’t “actually descend down from heaven, but rather is described as the light that occupies everywhere,” according to the Pinterest page.

Across town at American University, the canvases are much larger than in Foggy Bottom, but if the works weren’t so strong, they would be in danger of suffering from the poor gallery on the third floor of the Katzen. Not only is the space plagued with too many nooks and crannies, but some of the largest pieces from the show couldn’t make it through the door, so they don’t appear in the exhibit. At the Museum of Fine Arts, Houston, by comparison, the show was arranged brilliantly.

Despite the shortcomings at American University, the opportunity to see both the artist’s larger and smaller works is a rare treat. That’s particularly true for a painter like Olitski, who worked in several different styles.

In the Brady Gallery catalog, Carmean identifies four such styles: stain paintings (where the unprimed canvas was treated with near-liquid paint), sprays (in which the paint was applied with a variety of techniques, including with a spray gun), Baroque (“more painterly and less colorful”) and orbs or High Baroque (Olitski’s last paintings, the thick-treated ones that may, at times, evoke milk in coffee, cake icing or, perhaps, an oil spill).

In his catalog essay for “Revelation,” Carmean notes the odd absence of discussions of faith in contemporary art history and criticism. “The confession of faith — especially as an aspect of artists’ more serious art-making — is a subject virtually group-censored by and within the art world, and thus a sanction enforced on the practice of art history,” he writes. “A clear measure of such disdain can be found in Olitski’s own words describing his belief as ‘the truth I almost dare not tell.’”

That doesn’t mean there are hidden religious images in Olitski’s works, Carmean cautions, but the artist’s many references to God and the Almighty aren’t to be taken lightly.

“Where I live, the Almighty presents me with sunsets and I’m up after work as dawn is breaking, so I have the best [rise and set] of what He provides,” Olitski, who famously slept during the day and painted through the night, once told John Walters, then the host of New Hampshire Public Radio’s Front Porch.

“What the Almighty does, God, it’s so beautiful,” he continued. “To look at the water and trees, the dawn is breaking, the colors, and I say to the Almighty … ‘Why are You doing this to me? Look what You do, just like that!’”

Olitski also “embraced the practice of regular prayer and thanksgiving” and referred to his life as a miracle, Carmean writes. And his wife recalls Olitski telling her that in the studio he got down on his knees and prayed “that when I’m working, I’ll get out of [my own] way.”

Olitski’s titles may have been assigned after the works were completed, but for works that reference figures that range from Cleopatra and Pushkin to Moses and Ishtar, and with titles such as “Absalom Passage #10” (1973) and “Rephahim Shade-2” (1974), a glossary — whether based on Pinterest or in a catalog — is no doubt a handy roadmap.