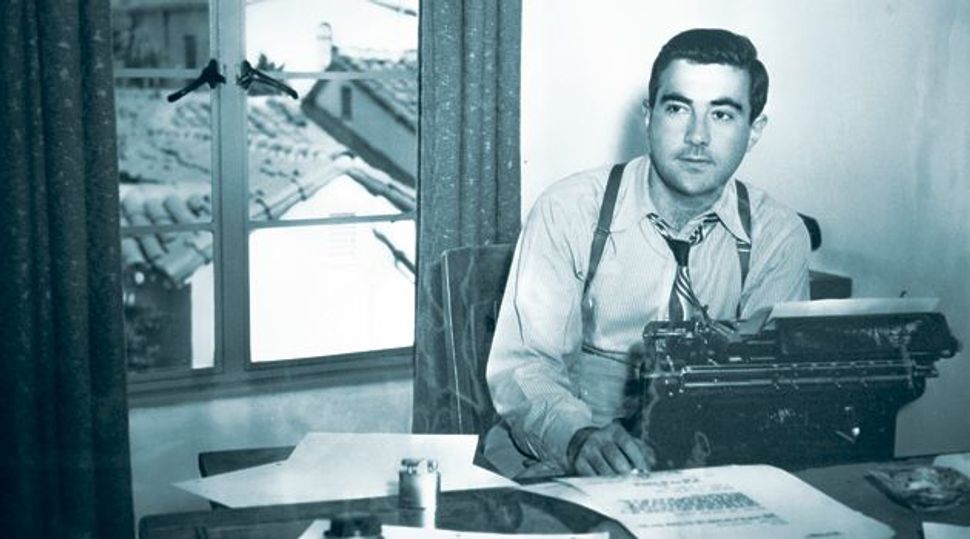 Dark Passages: The Jewish writer David Goodis is one of the lesser-known heroes of noir fiction. Image by courtesy Lou Boxer

From time to time I like to go to a bar on the Lower East Side of Manhattan called The Magician. It’s the décor that draws me. The Magician has the straight lines, dark wood and high polish of early-to-midcentury art deco style that make me feel, for an hour or two, like the hero of some hardboiled detective novel. A Sam Spade, say, or a Philip Marlowe — strong men who are savvy and self-sufficient, men who know their own minds.

The truth is, I’m a lot less confident than they are. Like everyone else, I worry — about money, work, relationships, the usual things. In good moments I feel like I’ve got it pretty much together. In worse ones, it seems that disaster could be just around the next corner. That’s when it’s good to sit at The Magician and pull myself together, preferably with a good crime novel by my side.

I’m not the only one who has the noir fantasy, and it’s not just a question of finding the right furniture. Since the Black Lizard imprint began reissuing forgotten crime novels in the 1980s, other publishers — some quite prestigious — have piled on. The Library of America has issued a bundle of anthologies, including a recent collection of novels by Jewish writer David Goodis, and The New York Review of Books has come out with a new edition of “The Expendable Man” by Dorothy B. Hughes, one of the few female noir authors. Then there is the retro-style Hard Case Crime house, founded in 2004, which recently published its 108th book, “The Twenty-Year Death” by Ariel S. Winter. And there are plenty of other titles, besides.

Whereas crime fiction was once strictly for the pulps, nowadays it’s high culture. “Goodis is a crime novelist, but only in the way that Herman Melville is a nautical novelist and Cormac McCarthy is a writer of westerns,” Nathaniel Rich wrote recently in The New York Review of Books. On The New Yorker’s website, Christine Smallwood recently claimed of Hughes that “her brilliant descriptive powers make and unmake reality.” Some on-the-pulse literary journals, such as the Los Angeles Review of Books, even have dedicated critics just for noir.

These praises are deserved, and not particularly controversial. The rediscovery of overlooked writers is a long-standing hobby of the literary world, and the popularization of past aesthetics a hobby of the culture at large. (Think of the midcentury inspiration for TV shows like “Mad Men,” or the speakeasy setting of “Boardwalk Empire.”) The stigma of pulp magazines has, for at least a few decades now, become a selling point. But there is something about noir novels and their protagonists that strikes just the right tone for a worried age. Since noir was invented, it seems as though each generation has rediscovered and reinvented it — from the war-torn 1940s to the post-Reagan ’80s. No wonder it’s popular again in our own recession-prone time.

In their archetypal form, pioneered by writers like Dashiell Hammett and Raymond Chandler, hardboiled stories followed the detective model, with a private eye hired to investigate some shady goings-on. These are men’s men who speak in clipped sentences, crack dry jokes and drink and smoke with earthy vitality. Though pursued by women, they are as likely to turn down sexual favors as to take advantage of them. Actors like Humphrey Bogart (“The Maltese Falcon,” “The Big Sleep”) and Elliott Gould (“The Long Goodbye”) portray them on film. Chandler wrote in his 1944 essay, “The Simple Art of Murder,” that this character “must be a complete man and a common man and yet an unusual man…. He must be the best man in his world and a good enough man for any world.” In short, “He is the hero, he is everything.”

Yet this formula is the exception as much as the rule. Plenty of noir novels are narrated by the criminal, or by narrators who are neither cop nor robber. “The Big Clock,” a 1946 book by pulp novelist, poet and Partisan Review founding editor Kenneth Fearing, is told from the point of view of nearly every character in it. Even the more typical noir protagonists are better exhibits of 20th-century alienation and anomie than they are of big-city bluster (a reason, perhaps, that American noir was always more appreciated in France than at home). Though they may be smart and tough, they live marginal lives with few real friends. They may put on a show of indifference when it comes to money, but they are usually in need of it. They may get the girl, but they rarely keep her. Despite an aura of self-assurance, they are astonishingly vulnerable.

It’s a description that perfectly fits the characters of David Goodis. Born in 1917 to Russian-Jewish immigrants in Philadelphia, Goodis was a writer for such pulp magazines as Gangland Detective Stories and Detective Fiction Weekly before breaking into radio and film. He got his first real break in 1946, when his novel, “Dark Passage,” was serialized by The Saturday Evening Post and turned into a movie starring Bogart and Lauren Bacall. The story is about a man named Vincent Parry who is convicted of murdering his wife, only to escape from prison to confront the jilted lover who framed him. It features such classic Goodis elements as blunt, repetitive prose; copious violence; a nightmarish atmosphere, and a tormented, lovesick character. Though he eventually escapes from the law, Parry is forced to leave behind the woman he loves.

Though “Dark Passage” is one of Goodis’s best books, his 1956 novel, “Down There,” is better known — at least to fans of New Wave French cinema — thanks to François Truffaut’s 1960 film adaptation, “Shoot the Piano Player,” starring Charles Aznavour. (A remake, titled “Don’t Shoot the Piano Player,” is currently in preproduction.) Its main character, Eddie, is another recurring Goodis type — a once-famous artist living in self-imposed obscurity after a life-shattering trauma. In this case, Eddie was a concert pianist whose wife committed suicide after cheating on him in order to advance his career. Now he tickles the ivories at a rundown Philadelphia bar, in a state of near-catatonic detachment. “It was almost as though he wasn’t there and the piano was playing all by itself. Regardless of the action at the tables or the bar, the piano man was out of it, not even an observer.”

Other Goodis characters include criminals who dream of respectability, working-class men leading dead-end lives and, in a few cases, down-and-out drifters trying to get by in some of the most depressing neighborhoods in America. They are all permanently at loose ends, sufferers of inner displacement, victims of an existential precariousness. The artist R.B. Kitaj once described his idea of diasporism as “the last days in a transit camp, with your thin mattress in a roll at the foot of the bed.” It’s the state Goodis’s characters live in, as well, where the only thing to contend with uncertainty is fear.

The characters in Ariel Winter’s “The Twenty-Year Death” aren’t quite as dark as Goodis’s, but they, too, exhibit the hallmarks of classic noir protagonists. And so they should. Winter’s novel, which is really three interconnected novels, overtly imitates the styles of three other writers: Belgian detective storywriter Georges Simenon, Chandler and Jim Thompson, who, of them all, could compete with Goodis for sheer bleakness. The book is Winter’s first noir novel — his other professions include bookseller and children’s author — and it’s an impressive debut. The imitations of his predecessors are spot-on without seeming like postmodern pastiche, and add up to a delectable work in their own right.

While the final segment of Winter’s book, “Police at the Funeral,” narrated by a washed-up, alcoholic author named Shem Rosenkrantz, is the most depressing, it’s the second section, “The Falling Star,” that fits with what most people think of as noir fiction. That’s because it’s modeled on Chandler, who not only helped popularize the form, but also brought it to respectability. No less an authority than W.H. Auden wrote of Chandler that his “powerful and extremely depressing books should be read and judged, not as escape literature, but as works of art.”

In Winter’s case, instead of Chandler’s Philip Marlowe, the story stars Dennis Foster, a West Coast private eye who is hired to protect a Hollywood starlet but winds up investigating the murder of a less famous actress instead. Like Marlowe he’s a tough cookie, but full of barely submerged pathos. Consider, for example, where he lives:

My apartment was just one big room with a private bathroom and a small kitchenette in a closet…. The only window was in the bathroom and it was made of pebbled glass.

It’s hardly tripping the light fantastic, let alone the stuff of wish fulfillment. As Auden pointed out, it’s a mistake to think of noir as escape literature only.

Indeed, far from the invincible heroes of Hollywood or the fixers of popular imagination, noir protagonists are usually pathetic, marginal figures. And yet, if there’s a single quality that characterizes them, it’s resilience. They are beaten up, abused, defrauded and taken advantage of — and they stumble on. They absorb pain, disappointment and loss with a wry acceptance not much different from their response to success or pleasure. They are masters of a stoicism bordering on fatalism, and even, at times, seem to take their own lives lightly.

I find solace in identifying with such characters, however depressing they may be. They have their problems, but they deal with them unflinchingly. They may not have any big answers, but they have enough small ones to get by. And sometimes, with a well-timed joke or just a few lucky turns, they can have some fun, as well. It’s a homely philosophy — hardboiled, you might say — but it’ll do in a pinch. Enough, at least, for me to finish my drink and go home.