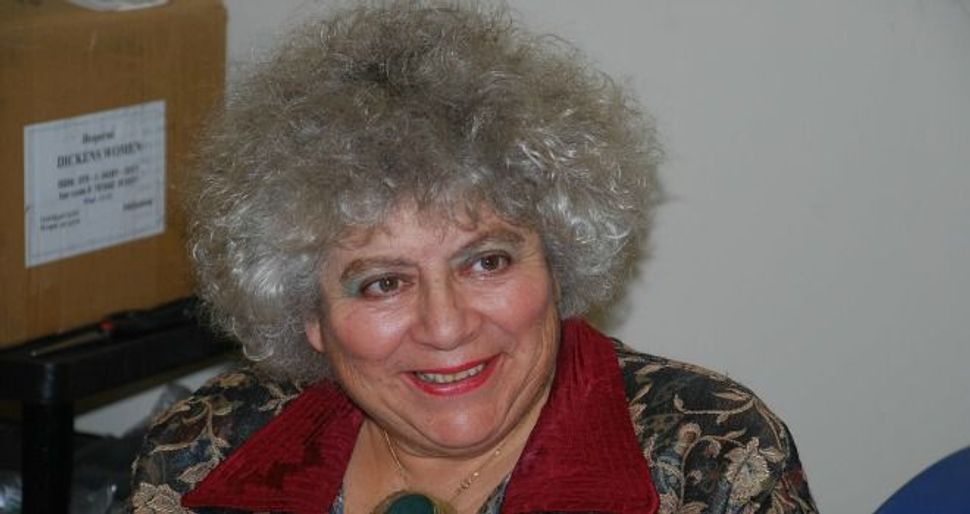 When I met Miriam Margolyes at her friend’s cozy apartment on Manhattan’s Upper West Side, she was sporting a bold floral house dress and a shock of wild white hair that seemed at odds with her upper-crust British accent. While she checked emails, she asked if I wanted anything to eat or drink, then admitted with a sheepish smile and a wave of the hand that she had nothing to offer. Then, finished with her email, she settled back on her couch to discuss “Dickens’ Women,” her solo show about Charles Dickens’s female characters. The piece, which she co-wrote with Sonia Fraser, is currently on a nationwide tour, opening in New York on November 9 and playing in December in Sanibel, Fla., and in Chicago.

For the 71-year-old Oxford-raised and Cambridge-educated Margolyes, who played Professor Pomona Sprout in the Harry Potter films and has appeared in such movies as “Yentl” and “The Age of Innocence,” standing onstage alone is a relatively new experience. She says that the impulse to create “Dickens’ Women” was born of a desire to draw parallels between the women in Dickens’s life and his vivid fictional creations. The play brings together elements of lecture, standup comedy and intense drama, while allowing Margolyes to add her own contemporary sensibility. For example, Margolyes presents Mrs. Micawber from “David Copperfield” not as a buffoon, but as a slightly pathetic woman with an unexpected sweetness. Similarly, Margolyes, who is openly gay, offers an interpretation of Miss Wade from “Little Dorrit” as a lesbian.

During our conversation, Margolyes, whose parents were middle-class, observant British Jews — her dad was a physician, her mom a successful businesswoman who ran a string of boarding houses for Oxford students — asserted that being Jewish informs her actor’s aesthetic more than anything else. “It’s the ease with which I can feel joy, despair, laughter and tears,” she said. “I don’t think Jewish women have to delve to find emotion; I think emotion is trembling on the brink for every Jewish woman. It comes with the territory, and it’s very useful in this show.”

To this day, Margolyes is a member of an Orthodox synagogue in London. She fasts on Yom Kippur (and always has), maintains the dietary traditions during Passover and has never eaten bacon or ham, not even at a restaurant.

Margolyes is keenly aware that her fellow congregants probably view her homosexuality and her political philosophies with a jaundiced eye, but she says she feels neither con- tradictions within herself nor the need to reconcile herself to others. Inconsistency is fine with her, and, indeed, when she lived in Los Angeles Margolyes was a member of a liberal reconstructionist synagogue. Perhaps most striking is her rejection of religion, despite her participation in religious ritual. “I don’t believe it will bring me closer to God,” she said. “I don’t believe in God. But I believe in tradition and do it for my parents, whom I loved very much.”

Margolyes is also an outspoken critic of Israel, and, indeed, when she performed her play in London, a protest erupted outside the theater. She admits the topic is “fraught,” but says she refuses to remain silent, especially in light of what she described as the horrific conditions in which many Palestinians live on the West Bank, and “the aggressive and illegal” presence of the Israeli army and American settlers there.

“It doesn’t seem right that any Jew can come back and live in Palestine — Israel — but no Palestinian can do the same, even when they came from the region,” she said. “The tragedy of the Holocaust has twisted things, and the wrong people are being punished for it. I care about what Israel does because as a Jew, I am connected to it. And therefore when they do something that I think is wicked and it’s in my name, I have to protest.”

Asked if she believes that Israel should exist at all, she admitted that she isn’t sure, then quickly added: “But I don’t want it to disappear. This is a subject which involves contradiction. It’s mud- dled and difficult.”

She acknowledged that part of that conundrum is the rise of anti-Semitism, but she was not willing to lay blame for that at Israel’s doorstep. “My belief is that people are natu- rally anti-Semitic and the shocking things that Israel does allows that anti-Semitism to be voiced, giving it validity so that it can mask itself as anti-Israeli feeling when in fact it’s anti-Semitism. I will fight anti- Semitism where I find it, but it’s important to be able to distinguish between anti-Semitism and anti- Israeli feelings. Vanessa Redgrave is profoundly anti-Israeli, but she’s not anti-Semitic at all.”

From the very beginning of her career, Margolyes was clearly her own person. She toyed with the idea of being a doctor at a time when few women thought in those terms, and she was the only woman to perform in Cambridge University’s Footlights revue of 1962, which was helmed by Trevor Nunn and co- starred Monty Python co-founders John Cleese and Graham Chapman.

“I always enjoyed being distinctive, and I suppose people could have said I was a feminist, but I didn’t know what it was at the time,” she said. “I stuck out in a crowd. I smoked a pipe, wore a purple hat and behaved outrageously.”

Margolyes came out in stages, first to her parents when she was 27 years old. “They were horrified and disgusted, and I don’t know if they ever got over it,” she said. “I disappointed them. I didn’t get married or give them grandchildren; I’m sad for that. But you have to be who you are…. I did it because my parents encouraged me to believe we shouldn’t have secrets. But it’s self- indulgent to tell people you’re gay if they can’t deal with it.”

Nevertheless, being gay has had no impact on her career, she said, but she advocates a “Don’t ask, don’t tell” policy for actors if they perceive that being identified as gay can hurt their careers. “And I certainly don’t believe in outing anyone else,” she continued. “It’s monstrous. The only time I believe in outing someone is if it’s a politician who is gay and has made anti-gay statements.”

Living a life in public — at least voicing one’s positions out loud — is not without risk, and Margolyes closed the interview on a wistful note. “I just hope to grow old being tolerant,” she said. “I was always fiery. I hope my fires are a little dampened and that I’m a little more sensible.”

Simi Horwitz is a cultural reporter whose previous credits include 17 years with Back Stage and eight with Theater Week.