A Kick in the Pants for Jewish Projects 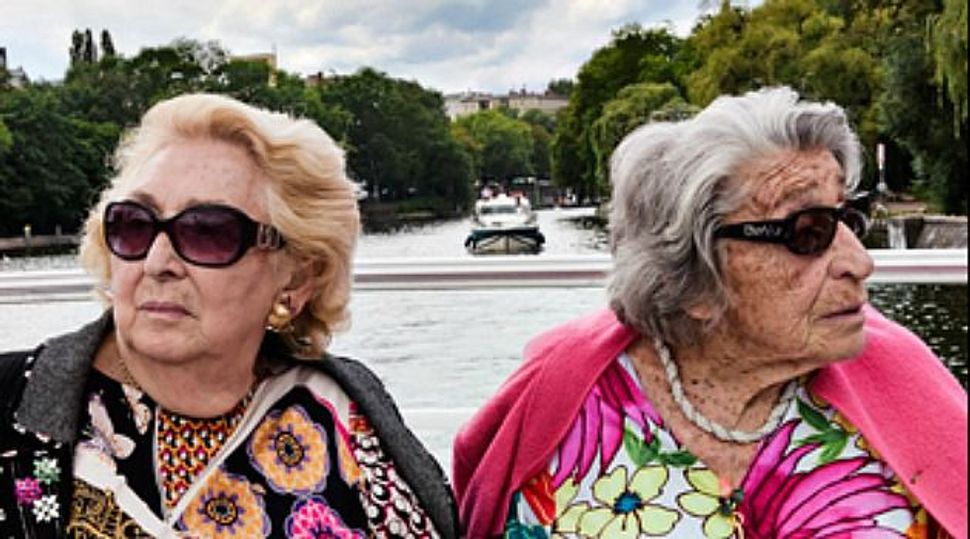 Golden Years: ?Oma and Bella? documents the lives of the filmmaker?s grandmother, Oma (right), and her best friend. Image by Courtesy alexa karolinski

If you happen to know anyone who’s trying to release an album, produce a play, start a bakery, publish an upstart web magazine or invent a new iPhone app, odds are that you’ve stumbled upon Kickstarter. The website, which launched in April 2009, harnesses the power of social media to funnel money to up-and-coming projects in need. In its first three years, Kickstarter has grown into the go-to grassroots crowdfunding source for a host of artists, inventors and dreamers. Hopefuls post their projects and a funding goal, along with enticements for contributors if the donation point is met: a CD signed by the musicians, say, or tickets to opening night of a play. Along the way, Kickstarter has become an incubator for a new kind of Jewish project that operates without the backing of major Jewish philanthropies, fostering everything from a (failed, alas) cholent card game to a “Jewish version of ‘The Da Vinci Code.’” It’s even inspired a similar all-Jewish site, Jewcer. From an upcoming New York City knishery to an all-trans klezmer band, the range of Jewish innovation displayed on Kickstarter is as rich as the diaspora itself.

Reporting on the Times: The New York Times and the Holocaust

As a film student at NYU, Emily Harrold stumbled upon an account of The New York Times’s lack of coverage of Nazi atrocities and knew she wanted to do a film about it. It took a successful Kickstarter campaign — and a combined donation of $6,473 — to fund her investigation into the paper during World War II. “The aim is to explore and understand why The New York Times buried reports of The Holocaust, rather than to judge the paper,” Harrold explained. “It’s trying to put ourselves in the shoes of publisher Arthur Hays Sulzberger as he struggled to decide where to place reports of Jewish extermination in a newspaper already filled with news of American deaths.”

A documentary about two Holocaust survivors living in Berlin, “Oma & Bella” is a heartfelt and deeply funny film that tells the story of best friends navigating their golden years. Director Alexa Karolinski, who began the project when she attempted to compile a Jewish cookbook with lessons from her grandmother Regina (“Oma” in German is “Nana”), funded her work on Kickstarter after trying and failing to obtain a documentary grant. “I turned to Kickstarter out of frustration,” Karolinski said, “but I was overwhelmed by the support I got — more than double what I asked for.” “Oma & Bella” premiered in Toronto and Berlin already, and is making its way to New York screens in November.

Historian Samantha Lakin and photographer Laura Bernier teamed up to expand on Lakin’s Fulbright project gathering interviews from Jewish children who fled to Switzerland to avoid Nazi invasion in Europe. Some 42 backers donated over $1,000 more than Lakin and Bernier’s goal of $2,000. The pair were able to produce an exhibit at New York’s Museum of Tolerance featuring Lakin’s painstaking research and Bernier’s gorgeous, heart-wrenching photos to capture the tumultuous lives of the refugee children. Their supporters? A vast, varied community who all tapped in through social networks. “Rabbis, survivors and their families, ambassadors, professors, scholars, photographers and filmmakers all felt connected to ‘Testimonies’ through Kickstarter,” Bernier said.

“We wanted to do something substantive, something where we could ask real questions about our heritage and could be empowered by our Jewish identity,” explained Jesse Mann, the director of the Kickstarter-funded documentary “Punk Jews.” Along with partner Evan Kleinman, Mann raised $10,721 to make a series of short films about a subculture of, well, punk-ish Jews. Mann encapsulates the secular and urban community of Jewish culture-makers who are redefining what it means to be Jewish within the DIY music world. Along the way, he formed a community of music-loving backers, who were rewarded with CDs, concert tickets and yarmulkes. 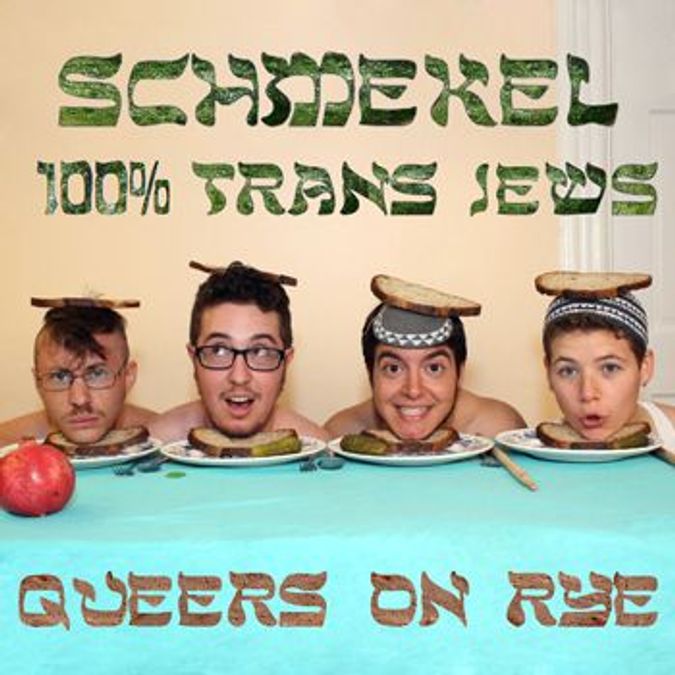 On Tour: Schmekel hits the road with its debut album. Image by Courtesy simcha halpert-hanson

The world’s only all-Jewish all-transgendered klezmer band was in need of a method to bring their particular brand of humor and music to the people outside of Brooklyn. “Two years ago, Lucian [Kahn] made a joke in a diner that it would be funny to start a band of all-transmasculine Jews and call it ‘Schmekel’ (small penis), and to his surprise, hundreds of people wanted to listen to it,” explained founding member Simcha Halpert-Hanson. So the quartet looked to Kickstarter to help get some dough for a tour van. So many surprise supporters came out of the woodwork that the group got an extra $664 in donations, money that will surely be useful for some extra sandwiches. And thanks to the fine denizens of Kickstarter, Schmekel is bringing the stylings of their debut album “Queer on Rye” to a town near you.

Seth Kroll and Dan Levine had exhausted all the usual funding routes for filmmaking when they hit upon Kickstarter to make “Mifgash,” a film examining the rise of Taglit-Birthright Israel, the program that provides free trips to Israel for Jewish 18- to 26-year-olds. “We noticed that regardless of season, year or school, there were certain commonalities between these trips,” Kroll said. The “Mifgash” team traced these connections, illustrating a network of new relationships the trip had forged, and a revived awareness of Jewish identity. Using another $10,330 raised from curious Kickstarter browsers, they completed the documentary, which went on to win accolades in several independent film festivals, including the Boston Jewish Film Festival. 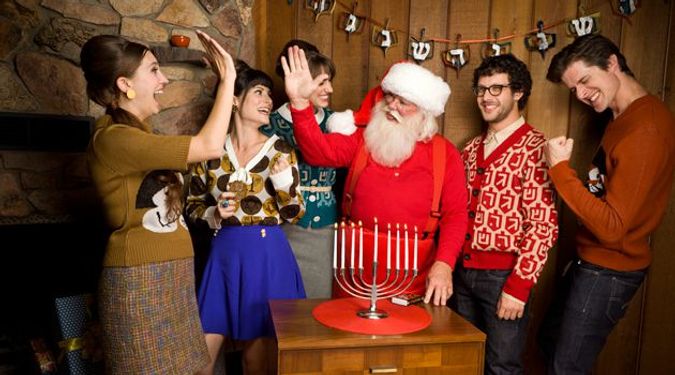 Cozy: Geltfiend created Hanukkah swag as a Jewish answer to the Christmas sweater tradition. Below, Meshugene Divas, an opera and Jewish music hybrid performance, advertises its show. Image by geltfiend

Carin Agiman’s idea came from too many holiday parties and too few options for festive winter wear. “We Jews didn’t have much going on in the holiday apparel department,” she said. So Agiman decided to change all that with Hanukkah-themed sweaters: a cardigan with dreidels dancing down the sleeves, a pullover with grinning snowmen in shtreimels and forelocks and a cute little gelt-printed number. “Kickstarter was the best chance I had to gain exposure and raise enough money to go into production,” Agiman said. With her goal of $20,000 met, expect to see Geltfiend’s sassy knits out in time for this year’s menorah lighting.

“My ideal knish? That’s one for the Talmud,” Noah Wildman jokes. And you can’t blame him for being indecisive: Wildman’s Knishery NYC churns out specialty knishes like butternut squash and pumpkin; potato and pastrami, and mango blueberry. Limited by a tiny New York City oven, Wildman turned to Kickstarter to ramp up the production of his toothsome Jewish classics, seeking $2,000 in funding to change his operation from a tiny in-house service to a full-blown knishmobile, distributing knishes once again through Manhattan’s Lower East Side.

Opera and Jewish traditional music might not sound like a combination that exists outside of your iTunes categories, but composer Osnat Netzer was determined to make it happen. Along with partner Derek David, he raised $4,570 to produce a concert of his hybrid creation, funding everything from the musicians’ fees to high-quality recordings to document the event. The show, Netzer says, went off without a hitch. “I think that the biggest advantage of also using Kickstarter is the amount of advertising and promotion that comes along with it. It’s the chance to get people aware, excited and involved in your project.”

Margaret Eby has contributed to The New York Times, The Los Angeles Times, Slate and Salon, among other publications. She lives in Brooklyn.

A Kick in the Pants for Jewish Projects