Bigger Question Than Whether To Give 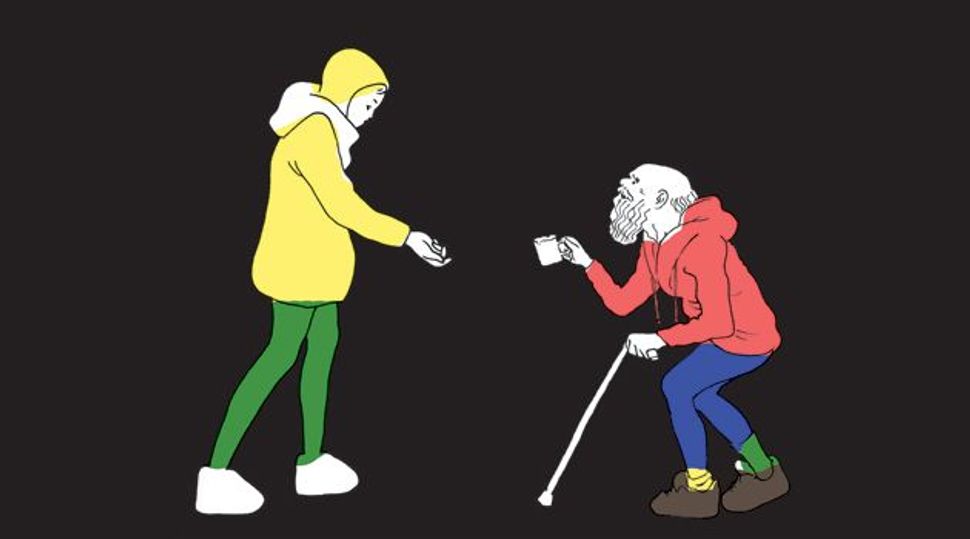 As a professional anti-poverty worker, one of the most frequent questions I am asked by friends and acquaintances is whether to give money to panhandlers. People want to be generous and helpful, but they are worried about potentially facilitating self-destructive behavior or aiding con artists.

Given that Jewish tradition tends to rake every social issue over the coals for extended discussion, it is no surprise that this issue has also generated debate over the centuries. The Jewish Museum in New York even features dueling video clips of experts debating whether Jewish law dictates giving money to beggars with no questions asked, or whether it is appropriate to quiz them to try to determine whether the money will be used well.

When I am asked this question, I generally give two answers. First, I believe the decision of whether to give to a panhandler is complicated, nuanced and should depend upon each situation and your conscience. Second, I believe we should also be asking a more important question: Why, in the richest nation in the history of the world, are there so many people still in need?

We need to be careful not to weigh down low-income people with our own false assumptions and stereotypes. There’s an old story from the Jewish tradition of a beggar who turns out to live in another town in a mansion. Local leaders want to respond by banning poor people from begging, until the area rabbi points out that the person in question was wealthy, so it would make more sense to ban begging by rich people.

The fact is that in America the people on the street panhandling are a small subsection of the people who live on the street. The people who live on the street are a small subsection of those who are homeless, and the people who are homeless are a small subsection of those who are poor, hungry and food insecure. For instance, in New York City today, thousands of people live on the streets, while tens of thousands live in the city’s homeless shelters, more than 1.5 million suffer from food insecurity and more than 1.7 million live on incomes below the meager federal poverty line. Most are children, seniors or people with disabilities. Most of the rest aren’t drug addicts or lazy — they are just unemployed or earn too little to fully support their families. So it’s up to you whether you give money to the person standing before you or whether, in addition to (or instead of) that act, you donate generously to not-for-profit groups aiding and fighting for low-income Americans.

Yet the Jewish social justice tradition compels us to do more — it requires us to redress the root causes of these problems: failed governmental and economic policies that give the United States the highest rates, by far, of economic deprivation in the Western industrialized world. After all, in Hebrew, the root word of tzedakah isn’t “charity”; it is “justice.” Policies entirely under the control of Americans determine whether we continue to let U.S. poverty, hunger and homelessness soar — or whether we decrease them dramatically, as other nations have done. Contacting your elected officials to demand that they take specific actions to reduce these problems will do far more in the long run than simply giving away some loose change.

Joel Berg, author of “All You Can Eat: How Hungry is America?” (Seven Stories Press, 2008) is the executive director of the New York City Coalition Against Hunger and a senior fellow at the Center for American Progress.

Bigger Question Than Whether To Give