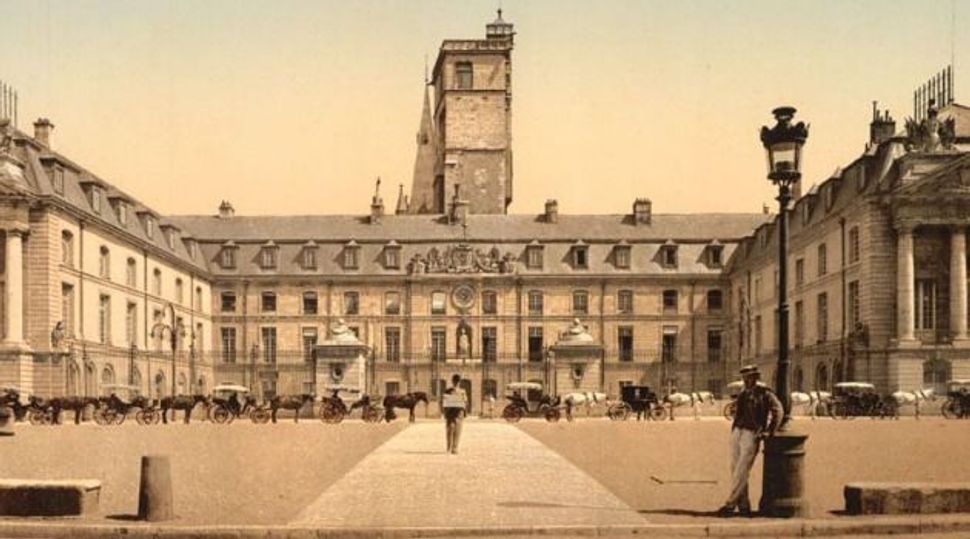 Hold The Mustard: The Jewish population of Dijon, France, eagerly assimilated over the course of the 19th century. Image by Wikimedia Commons

Much rarer than Dijon’s mustard and wine is the small and, until recently, vibrant Jewish community that called this small French city home. But as its title warns, “An Uncertain Future,” a series of oral interviews conducted with members of this dwindling group, suggests that while French Jewry will always have Paris, they may not have much longer such provincial cities that have made crucial contributions to their history.

In the beginning was the Revolution. The seismic tremors reached as far as eastern France, carrying dozens of Alsatian Jewish families to Dijon, where they filled the gap left by the expulsion of Jews from medieval France. Liberated and enfranchised by the events of 1789, these newcomers, mostly German or Yiddish speakers, eagerly assimilated over the course of the 19th century. In Dijon, as elsewhere, French Jews yoked their identity to their security with the republican credo introduced by the revolution. With the birth of the long-lived and secular Third Republic, the Jews of Dijon completed a majestic synagogue near the medieval center in 1879, imbuing it with love of their patrie and their patriarchs.

The patrie, however, failed them during World War II. With France’s defeat, the Republic’s collapse and the creation of the Vichy government, the Jews of Dijon, like their coreligionists elsewhere, were transformed from French citizens into pariahs. Many accounts in the book begin in 1940 with either elderly Dijonnais who survived the war years or children recalling their parents’ experiences. Albert Huberfeld, the owner of a haberdashery, remembers hiding with his family in the countryside. Not only did local Catholics help his family, but Huberfeld also recalls these years as a “happy time.”

Of course, as historians such as Richard Cobb and novelists such as Irène Némirovsky remind us, a child’s perspective of the flight from Paris or Nazis often differs dramatically from that of adults. But Huberfeld’s memories, or those of another elderly Dijonnaise, Marcelle David, also emphasize the pivotal role played by gentile neighbors in Dijon. Though Weiner and Sharpless do not pursue this question, these and similar experiences at least suggest the possibility that, compared to Paris, smaller cities and towns, where social bonds were more intimate, were more active in the face of Jewish persecution. Nevertheless, the community suffered cruelly: About 150 community members were arrested and murdered by the Nazis or Vichy’s paramilitary police, the Milice (whom the authors misleadingly call National Guardsmen).

But the book’s particular revelation is the postwar experience of Dijon’s Jews. Already reduced by the trials of the occupation, the community dwindled further during the 1950s as younger members, eager to shed their provincial constraints, moved to Paris. The cunning of history, however, threw a lifeline in the early 1960s: the great wave of North African Jews who, following the independence of Morocco, Tunisia and, most dramatically, Algeria, resettled in France. For nearly 40 years, Simon Sibony has been Dijon’s rabbi. Like 80% of the community, Sibony is Sephardi — his family moved from Morocco to France after the Six Day War — but he has reached across the aisle to the older Ashkenazi members. With only a single synagogue and disquieting demographics, the Jews of Dijon — Ashkenazi and Sephardi, conservative and liberal, traditional and less traditional — made a virtue of necessity. So much so, as Sibony remarked, that one discovers that even the “non-religious also have important things to teach.”

But there is an unexpected exception: the Lubavitchers. With the arrival of a young missionary couple from Israel in 1993, an uncivil war began within the Dijon community. To their supporters, the Lubavitchers offered a firm religious identity they failed to find under the easygoing Sibony; to their critics, the rigid practices of the Lubavitchers offered only isolation. Despite repeated efforts, the two sides never found a compromise; like Jews and gentiles in more traditional societies, they now live in a state of mutual incomprehension and suspicion.

Startlingly, a community leader, Israel Cemachovic, insists there “isn’t much difference between [the Lubavitchers] and the Muslim dogmatists, except that the Muslim dogmatists are killing people and the Jews aren’t. But mentally, they are the same.” More than the Lubavitch presence, the radicalization of some French Muslim youths has created an uncertain future for Dijon’s Jews. Nearly all of Weiner and Sharpless’s interviews, which span the years from 1993 to 2005 (the book’s subtitle is, in this respect, deceptive), reflect this fear.

Indeed, there is a tragic arc to the interviews. In 1993, most interlocutors spoke of their peaceful relations with French Muslims — the existential threat then hailed from the National Front — but their situation had changed dramatically by 2005. The Second Intifada not only had a catastrophic impact on Jewish and Muslim relations in France, but for some interviewees, on their relations with many non-Jews. Malou Dressler, a retired teacher, declares she had once been French and Jewish in the eyes of her colleagues. Now, she believes, she is Jewish and French.

France’s future, perhaps, depends on again reaffirming the older order of adjectives not just for French Jews but also French Muslims. For this task, Jews and Muslims must together take the lead.