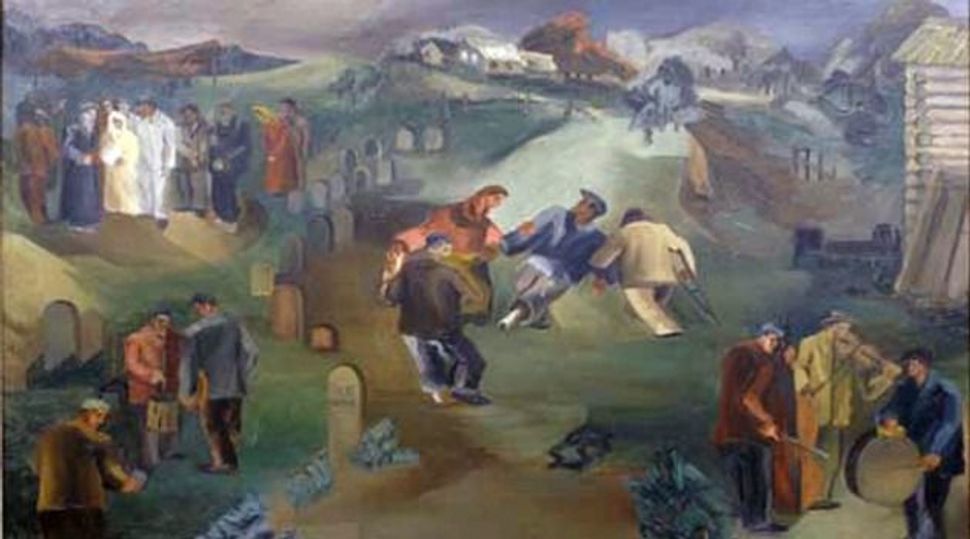 In Sickness and in Health: Leon Garland?s 1932 painting ?Wedding in the Cemetery? is based on an old legend that if orphans marry in a cemetery during a cholera epidemic, their dead parents will intercede to stop the scourge. Image by Courtesy Spertus Museum

In Chicago, The Spertus Museum has just opened “Jewish Modernists in Chicago,” the seventh chapter in its eight-part series, “Uncovered & Rediscovered: Stories of Jewish Chicago.” This new exhibit focuses on the artistic influence of a group of Jewish artists active in Chicago in the 1920s, ’30s and ’40s.

The entire series is part of the reinvention of the Spertus Institute of Jewish Studies that began in 2009 when Hal Lewis took over as president. The sleek glimmering glass building on South Michigan Avenue, built by the Chicago firm Krueck and Sexton in 2007, replaced the older, dark yet haimish turn-of-the-century office building. Chicago Tribune architecture critic Blair Kamin wrote in 2008 in the Architectural Record that the “10-story building resembles a shimmering piece of quartz exquisitely inserted into a great stone wall, its faceted, folded facade of glass glinting in the morning sun.” And yet its timing was bad. As the Tribune reported in January, the crash meant Spertus’s endowment dropped 22% in 2012 from the previous two years. Spertus still owed $43.6 million of the $56.1 million it had borrowed to build the new building. When the new building opened, there was a kosher restaurant open every day; now the dining area is only open for special events. Space is now being rented out to the School of the Art Institute of Chicago and the Meadville Lombard Theological School.

The “Uncovered” exhibit is in a small gallery on the ground floor, across from the front desk. The exhibit is free and on ground level to encourage passersby to walk in. As I visited, a stream of Art Institute students passed through the front door to attend class, without even glancing at the exhibit. This is unfortunate because this is a fascinating, thoughtful exploration of Jewish modernist artists, and all of the artwork comes from Spertus’s own archives.

What is striking about the exhibition is the sense of reinvention that all these artists share, despite their diversity in style. All were first- or second-generation Americans. This was a unique time period when the great mass migration from Eastern Europe of Jewish immigrants coincided with the rebuilding of Chicago after the Great Fire of 1871. Chicago was the fastest growing city in the world; Jewish immigrant artists identified with its spirit of rapid re-creation.

These artists saw a parallel between Chicago’s rebirth and their own reinventing of identity. Modernism, just like emigration, gave them the opportunity to transform themselves: Artists tried on new styles, experimenting with Cubism, Surrealism, simplified Naturalism and with different materials — dropping and rejecting styles and materials as they saw fit. Reacting to the conservative standards of the Art Institute of Chicago, they learned to create from their own points of view.

This act of using art as a means toward personal reinvention and identity transformation is encapsulated in the small bookplate of Louis M. Stein on display, which was drawn by Todros Geller, the “Dean,” or father-figure, of Chicago Jewish artists in this period. Stein was born Yitchak Leyb Fradkin in Ukraine in 1883.

But when he immigrated to Chicago in 1907, he adopted a new name and established a printing house that published high-quality art books, many of which were collaborations between Yiddish authors and Jewish artists. Among the more notewothy examples was “Land to Land,” a collection of Geller’s woodcuts. Geller’s fanciful bookplate depicts Stein as a turbaned man on a magic flying carpet, escaping to exotic worlds far away from the Ukraine shtetl or even the new shtetls of Chicago.

Geller also reinvents himself in his artwork in his adopted city. On the title page of “Land to Land,” a goat stands on the shore of Lake Michigan with Chicago’s skyline in the background. In Geller’s art, the goat is a motif representing the artist himself — the rugged Eastern European figure, here reflecting his status as a successful transplant from Eastern Europe to Chicago, the New World, still holding on to the old country.

Many of the artists exhibited here clung strongly to their Jewish identity and created art from within vibrant Jewish artst communities. According to curator Ilana Segal’s note, at this time Chicago had its own Yiddish literary group; one oil painting by Geller shows a portrait of the soulful-eyed Yiddish poet Ben Shalom. Artists spoke Yiddish at cafes, and Geller hosted Friday night get-togethers in his studio. All of the artists were members of the Jewish arts club “Around the Palette,” which was founded by Geller.

Until recently there has been near-silence about Jewish identity in art history. Art critic Margaret Olin has attributed this reluctance to mention the Jewishness of artists in art criticism as an assimilationist tactic, a reaction to the anti-Semitism intrinsic to modern art theory. As she writes, “assimilated Jews express themselves in the visual arts as individuals, not ‘as Jews.’” Part of what is so fascinating about this exhibit is that it captures a brief time when these Chicago artists were newly confronting their adopted homeland, still clinging to their Jewish identity and not yet concerned with assimilating. Their poor immigrant status meant they were still outsiders; they identified with the avant-garde, and with the worker and labor movements.

These artists were straddling two worlds, Jewish and assimilated, yet in that straddling, they made an effort to declare their Jewishness in their artwork. Geller encouraged his younger colleagues to incorporate Jewish subject matter into their work. Geller’s “Had Gadya” print and a handmade puzzle of a Hebrew aleph are presented alongside his completely secular works, such as a gorgeously colored landscape of a gritty steel Chicago.

One artist, A. Raymond Katz, successfully bridged the non-Jewish and Jewish art worlds: As Sandor, the European name for Alexander, he drew covers of The Chicagoan, a New Yorker–style magazine. There was no ostensibly Jewish content in these covers, and the artist Sam Greenberg even caricaturized Katz as a shaygetz, a non-Jew. Yet, after a trip home to Hungary, Katz was inspired to promote the use of Hebrew letters in modern Jewish decoration, specifically in stained glass designs for synagogues; he argued that the letters were more meaningful than standard Jewish motifs such as the Star of David. On display is his abstract print, “Holy Holy Holy & Final Mem.”

Despite or even because of the energy and richness of this exhibit, while looking at these woodcuts and prints preserved behind glass I was filled with the sense of loss: What has happened, I wondered, to the bustling Yiddish-speaking cafes, the Friday night gatherings of Jewish artists? My yearning to enter this vanished world of Jewish Chicago was much like the desire felt by Owen Wilson’s character in Woody Allen’s “Midnight in Paris” to travel back to 1920s Paris to commune with F. Scott Fitzgerald and Ernest Hemingway.

This yearning is not mine alone. As part of the exhibit, on the second floor one can observe an intriguing selection of videos. In one from 1986, a youngish Rabbi Michael Siegel of Anshe Emet interviews Dr. Irving Cutler, author of “The Jews of Chicago, From Shtetl to Suburb,” and asks him in a plaintive voice to talk about the “good old days.” Cutler says, “You could feel the throbbing of Yiddishkeit.” As Cutler explains, the story of Chicago’s Jews is a migration from city to the suburbs, from poverty and immigrant status to relative affluence and assimilation.

To reanimate memories of Jewish Chicago, Segal has created a Chicago “Jewish Memory Map” projected onto a wall to invite people to tell their stories; a virtual pin marks each story’s origin. Ironically, upward mobility and comfort mean that Jews today have many other museums to visit and causes to donate to. Interestingly, the curator’s text informs us that Louis M. Stein’s artists’ monographs were often made at a financial loss for Stein, but “that he expected nothing else and considered them his annual contribution to Jewish art and culture.” Recently, it was announced the Sam Zell family foundation gave $10 million to Chicago’s Museum of Contemporary Art. (The Zell family has given generously to many synagogues as well.) The New York Times reported that the MCA would use half of these funds to pay debt incurred during its construction in the 1990s.

Just as these Jewish modernist artists succeeded in reinventing themselves, so the rebuilding of Spertus was a bold attempt to create a new identity. One aches to see this gleaming structure fulfill its immense potential and mission: It should be a museum for the 21st century not only in image but in function, with bustling crowds within its gleaming glass walls.

Laura Hodes is a writer and lawyer living in Chicago.