‘Iron Dome’ Has Roots in Zionist Past 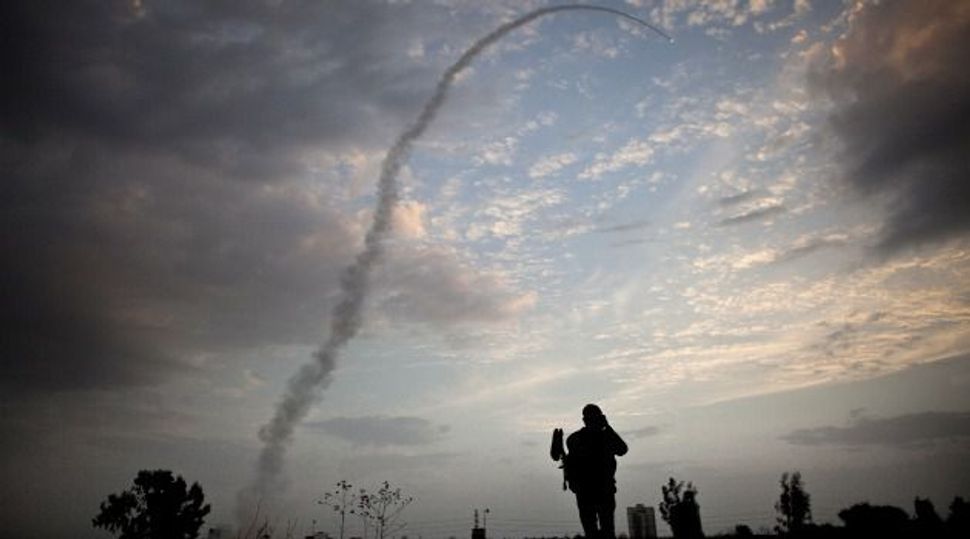 In Iron Dome We Trust: An Israeli observes the anti-missile defense system in action. Image by Getty Images

If Israel has had a hero in its mini-war with Hamas, it was not, as many commentators have observed, a person, but a surface-to-air anti-missile system known as Iron Dome — or in Hebrew, kipat barzel. With nearly a 90% interception rate of rockets heading for populated Israeli areas from Gaza, Iron Dome, never tested before under intense battle conditions, has been a spectacular success. In terms of lives saved, property protected and national morale maintained, it has already more than justified the billion dollars that went into its development.

From where, though, did it get its name? Although “Iron Dome” may strike one as fully appropriate, it’s not the kind of name that surface-to-air missiles are generally given. Over the years, for example, the United States has developed missiles of this type called the Avenger, the Arrow, the Redeye, the Stinger, the Hawk, the Terrier, the Sprint, the Bumblebee and the Typhon. (Typhon, the father of all monsters in Greek mythology, uprooted and hurled mountains at Zeus before succumbing to the latter’s thunderbolts.)

These are all names connoting aggressive pursuit, and they are typical. Besides Iron Dome, Israel has developed, or is working on, two other anti-missile systems of its own, one called ḥetz (“Arrow”) and the other sharvit k’samim (“Magic Wand”). Although “Magic Wand” may sound more pixyish than go-get-’em-ish, it, too, suggests a search-and-destroy capability.

A dome made of iron, on the other hand, doesn’t search for anything. It arches protectively overhead while the enemy’s projectiles bounce harmlessly off it. And although I don’t know anyone at Rafael, the Israeli weapons manufacturer that researched and developed the system, whom I could ask about the name, I can make a pretty good guess what inspired it.

So can anyone who knows a little Zionist history. In 1923, the renowned Zionist leader Ze’ev Jabotinsky wrote an essay that appeared simultaneously in the Russian-language Zionist periodical Razsviet and the German-language Zionist weekly Die Menorah under the respective titles of “O Zheleznoy Stene” (“On an Iron Wall”) and “Die Eiserne Wand” (“The Iron Wall”). Several weeks later, the essay appeared in Hebrew, too. It was written in the early years of the British Mandate, when the overall assumption among Zionists — despite some first, creeping doubts — was that Great Britain would stand by its Balfour Declaration commitment to establish a “Jewish national home” in Palestine and would be able to obtain the Arabs’ consent for this.

Jabotinsky, who had already resigned that year from the Zionist Executive in protest against what he considered its insufficiently militant policies, disagreed. Although he still believed at that point in the good intentions of the British, he was convinced that the Arabs would never peacefully allow a Jewish state to be created in Palestine and that they would take up arms to fight this if they felt forced to do so. There was not a case in human history, he wrote in his 1923 essay, of a native population voluntarily ceding its land to foreigners. It was a form of contempt for the Arabs of Palestine to think that they would behave any less patriotically or courageously than other peoples — and a dangerous illusion for Zionists to cultivate. Only an “iron wall” of armed strength that the Arabs could never hope to break down might overcome their resistance.

This wall, Jabotinsky wrote, might be built out of “British bayonets” or “Jewish bayonets” (he himself preferred them to be Jewish ones), but without it, the Jewish community of Palestine stood no chance. “I don’t believe,” he declared in conclusion, “that an agreement with Palestine’s Arabs is impossible. But what is impossible is for them to agree to anything as long as they have the shadow of a hope of getting rid of us. The only road to an agreement in the future is to give up trying to reach one in the present.”

“The Iron Wall” eventually became the best known of all of Jabotinsky’s many dozens of essays. In the course of the 1920s and ’30s, it was translated into Yiddish, French, Spanish, Romanian, Dutch and Serbo-Croatian, as well as into English in 1937. By then, a view that had seemed overly pessimistic to most Zionists in 1923 was obvious to nearly all, but “The Iron Wall” remained the most succinct and powerful statement of it. And I’d be willing to bet that whoever came up with “Iron Dome” as the name of Rafael’s surface-to-air anti-missile system was thinking of Jabotinsky’s phrase, too.

This doesn’t mean that whoever it was had necessarily read the essay or even knew that the phrase was Jabotinsky’s. Yet though a great deal has changed in the 80 years since the phrase was coined, some things have not, one of them being Arab and Muslim attitudes toward a Jewish state. The Arab and Muslim worlds know that their missiles, and the conventional or nuclear explosives that they carry, are their best hope for badly or mortally wounding this state — and only an iron dome stretching over its skies can make a lasting peace with them possible.

‘Iron Dome’ Has Roots in Zionist Past