Jakob Dylan Has Been Born Again 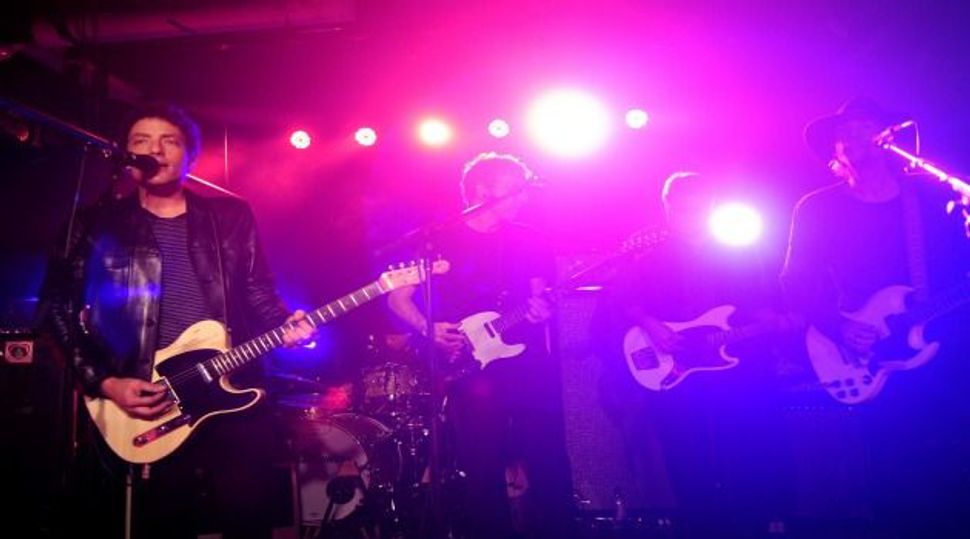 Jakob Dylan and The Wallflowers Image by Getty Images

Jakob Dylan may have had his fate set in (rolling) stone when his father immortalized him in song when he was still a child. When Dylan, who turns 43 this December, was 5 years old, old man Bob rewrote the Friday night Sabbath blessing over the children, turning it into a folk hymn that became the all-purpose rock anthem “Forever Young,” with its biblical imagery not-so-cleverly disguising it as a gift to his youngest son (“May you build a ladder to the stars / And climb on every rung”).

Jakob would grow up to be the only one of the brood to follow in his father’s footsteps (older brother Jesse became a video director; older sister Maria married Peter Himmelman, a Minnesota-bred Jewish folk-rock singer songwriter just like dad; not much is known of the other Dylan siblings), making it all the way to the cover of “Rolling Stone” on the basis of his leadership of the rock band.

The Wallflowers (possibly named after an obscure Bob Dylan tune called “Wallflower”). The group enjoyed huge popularity and commercial success in the mid to late 1990s, outselling anything that Dylan pere ever did, before going on hiatus for much of the aughts. The Wallflowers have regrouped and are back out on the road this fall with a terrific new album, “Glad All Over,” their first in seven years. It boasts a revitalized sound and the group’s strongest lineup ever, with founding members Rami Jaffee on keyboards and Greg Richling on bass, recent addition Stuart Mathis on guitar and a new drummer in Jack Irons — a founding member of the Red Hot Chili Peppers, a former drummer for Pearl Jam,and a member of the Rock and Roll of Fame.

The album also pairs Dylan up with his longtime musical idol Mick Jones, from the iconic English punk-rock group the Clash. In interviews dating from the early 1990s, Dylan has consistently paid tribute to the Clash as a key influence. Jones was the only Jewish member of the Clash, and he lends a hand here on two tracks: the bright, poppy “Misfits and Lovers” and the very Clash-like “Reboot the Mission,” a musical remake of that group’s rock-rap classic, “The Magnificent Seven,” with Dylan stepping in for the late Joe Strummer. The lyrics, which serve as a kind of manifesto for the newly re-formed Wallflowers, name-check Strummer and note that Irons served a stint with him, thereby bringing it all back home.

But inquiring minds want to know — what does young Dylan, the one-time bar mitzvah boy whose mostly Jewish rock group (Jaffee, Richling and Irons are all members of the tribe) got its start as the unofficial house band at Canter’s deli in the heavily Jewish Fairfax district of Los Angeles, believe? Is he as Bible- and God-obsessed as his famously religious father? Are there any hints that Jakob, like Dad, has apostate tendencies? Like his role model Bruce Springsteen— who famously jammed with The Wallflowers at the 1997 MTV Video Music Awards — Jakob mostly favors narratives about the open road, with lots of imagery of planes, trains and automobiles. He also, like the Boss, is fond of equating sex and religious ecstasy.

But like his dad, he’s deft with a biblical metaphor or image; there’s “a baby in a basket being left” on the new album, and on the song “It’s a Dream,” he sings, “We can’t stop fighting until we know God exists.”

But Jakob seems equally fixated on Lucifer. “Evil Is Alive and Well,” the opening track on his first solo album, “Seeing Things,” portrays a Dantesque world in which: “It doesn’t always have a shape / Almost never has a name / It maybe has a pitchfork / Maybe has a tail / But evil is alive and well / It might walk upright from out of the inferno.”

On the album, the devil makes several cameo appearances and takes one star turn. In “Love Is a Country,” he seemingly beds down with the narrator’s wife or girlfriend: “I remember the evening you last came home / It was warm as the devil sat back up with his boots put back on….” Dylan is similarly bothered by a yetzer hara — an “evil inclination” — on “The Devil’s Waltz”: “Your idle hands are what he wants / And your songs of pity are the devil’s waltz.” Perhaps the new album’s most suggestive lyric, from a theological perspective, is the opening track, “Hospital for Sinners,” on which Dylan sings: Some have crosses/ Bells that ring Most have angels painted with wings Old men and blind ones can find their way in Got statues, apostles and other godly things… It’s a hospital for sinners/ Ain’t no museum of saints

Fans of Bob Dylan will have a field day unpacking these lines. Is Jakob referring to the gaudy, diamond-encrusted cross his father wore during his so-called “born again” period? Are the “bells that ring” meant as a clue that he’s singing about Dad, one of whose best “gospel” songs is “Ring Them Bells”? Is “old men [with] statues [and] apostles” a dig at the 71-year-old Bob Dylan, who has always been surrounded by sycophants and acolytes and who, ever since winning an Academy Award for the song “Things Have Changed” in 2001, has performed his concerts in the company of his Oscar statuette placed on his guitar amplifier? Is “Hospital for Sinners” Jakob’s answer song to his father’s “Forever Young”?

Probably not, although he sure seems to be having fun toying with the notion when he sings, “You’ll sin till you drop then ask to be saved / If it’s a comeback you want then get your hands raised.” Over the course of a 50-year career, Bob Dylan has enjoyed numerous comebacks — not the least memorable being in 1974, when he returned to touring after an eight-year hiatus devoted in large part to raising his young family. The release of “Glad All Over” marks the equally welcome return of another Dylan, even if it remains devoid of the sort of “Second Coming” hyperbole that has often greeted the periodic re-emergences of his father.

Jakob Dylan Has Been Born Again