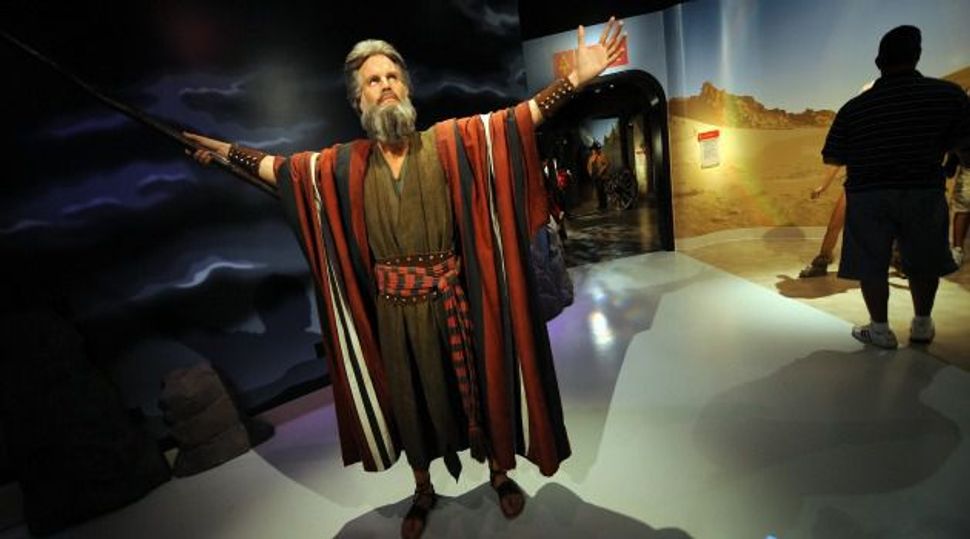 By now, I suspect that most Forward readers are aware that Herman Wouk, at the ripe old age of 97, has just published a novel called “The Lawgiver,” whose plot hinges on the efforts of an assorted band of characters to produce a movie based on the life of Moses. Determined to outdo Cecil B. DeMille’s well-known depiction of the biblical hero, they scheme, finagle, conspire, and tumble in and out of bed, all the while writing a lot of memos and emails. Like the epistolary novel of old, “The Lawgiver” is structured around a series of exchanges, but in a nod to the 21st century, these take the form of email rather than that of the letter.

Tapping and yapping away, the novel’s characters, who include a screenwriter educated at Bais Yaakov, a Jewish industrialist from Australia, an Israeli scientist, an accomplished Washington, D.C., lawyer named Josh and a distinguished writer from California named Herman Wouk, tango with one another, seeking to get this movie made. Fun and games ensue as the author of “Marjorie Morningstar” and “The Caine Mutiny” trains his sights on Hollywood.

Meanwhile, the press has trained its sights on, and made much of, Wouk’s continued productivity as well as of his awareness of digital technology, marveling at them both. What also warrants comment is Wouk’s fascination with Moses, a figure that casts a giant shadow over the proceedings.

The celebrated author never fully explains the source of his interest, except to say that he’s drawn to the man’s elusiveness. “Nobody understands Moses,” the character of Wouk tells Louis Gluck, the industrialist eager to secure Wouk’s participation in the project. “See, I’m right,” Gluck says. “You’re the man for the movie. Who else understands that nobody understands Moses?”

But then, Wouk doesn’t have to; nor do we. Moses, it seems, is one of those characters who never falls out of style. Film star, comic book hero, action figure and, according to the Metropolitan Casualty Insurance Company, “one of the greatest salesmen that ever lived,” Wouk’s Moses happens to be just the latest in a steady stream of Mosaic personalities who have captured the American literary and cinematic imagination.

Consider, for instance, Thomas Mann’s depiction of the biblical figure in his novelette, “The Tables of the Law.” Available these days as a stand-alone text, translated by Marion Faber and Stephen Lehmann, it first appeared in 1943 in an anthology called “The Ten Commandments: Ten Short Novels of Hitler’s War Against the Moral Code,” in which 10 “representative modern writers” — Franz Werfel and Rebecca West among them — were each assigned a commandment and asked to ponder its meaning. Although the Nobel Prize-winning author had been asked to reckon with what in the Christian tradition is the very first commandment, “Thou shalt have no other gods before me,” he chose instead to contemplate the biblical lawgiver, coming up with what one critic hailed as a most “plausible Moses.”

In quick, bold strokes, Mann sketched Moses’ biography, endowing him with a recognizable humanity. In a particularly nice touch, he depicted Moses, pickaxe in hand, coughing as he ascended Mount Sinai. Physically spent by his exertions, Mann’s Moses was equally taxed by the task of deciding in what language to couch the Ten Commandments, another lovely conceit. “It was perfectly clear to Moses that he could never under any circumstances commit the ten-phrase dictation to stone in Babylonian, Egyptian, or in the Bedouin patois of Sinai. Only in the language of his father’s blood kin could that happen, should that happen….” And a third delightful riff: Moses worked so hard to summon up the appropriate Hebrew words and sounds of the Decalogue, he actually spouted horns from the “strain of wishing and from one clear insight.” By the time Moses finished his labors, Mann wrote in one of his most winning passages, he had “carved the ABC of human behavior.”

Earlier generations of Americans would have agreed, especially those who, in 1910, flocked to see “The Life of Moses,” one of the first feature films made in this country.

Produced by the Vitagraph Company of America in an effort to “raise motion pictures out of the commonplace,” this silent five-reeler was touted as a “biblical film de luxe,” at once rich in scenic effects and “entirely reverent in spirit,” or so crowed one industry spokesman.

“The Life of Moses,” another added, writing in the pages of The Moving Picture World, “is proving to be the greatest event of its kind in motion pictures since the ‘Passion Play.’”

Filmed indoors, on a soundstage whose backdrops depicted the scenery and costumes of ancient Egypt, as well as outdoors, on the sands of Brooklyn’s Brighton Beach, which stood in for the Red Sea (“a mighty cold place for barelegged Israelites in January,” one chilled member of the crew recalled), “The Life of Moses” placed a premium on verisimilitude. That, and the high standing in which Moses was held, added to the film’s allure.

Other than Jesus, “there is no personality which stands out so prominently as that of Moses, the liberator and lawgiver of his race,” Film Index declared in 1909, giving a thumbs-up to the Vitagraph production.

It’s too early to tell whether “The Lawgiver” of 2012 will be similarly laureled. But one thing is perfectly clear: When dwelling on Moses, Herman Wouk is in very good company.