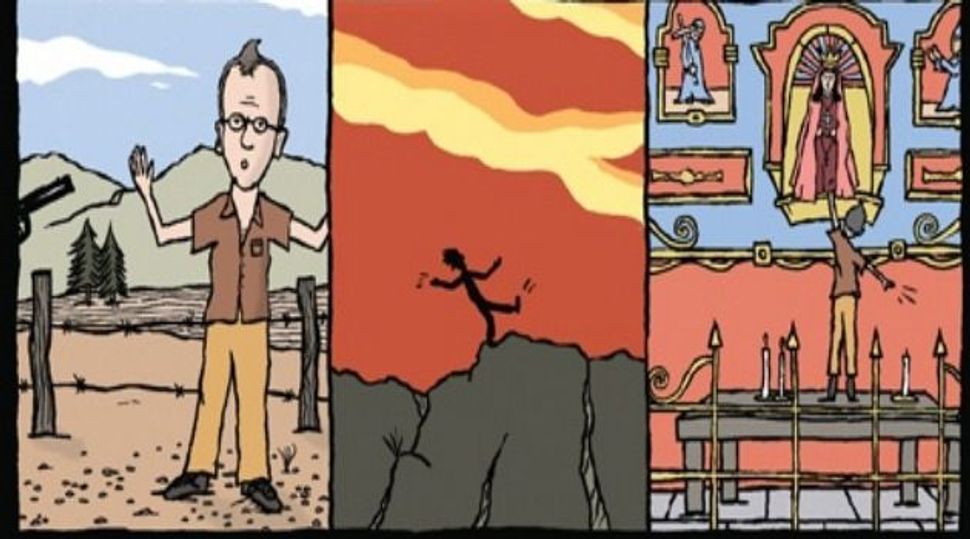 ‘I suppose you’ll turn the whole murky mystery into some preposterous page-turner,” one of Ilan Stavans’s academic colleagues tells him as “El Iluminado” gets moving. “‘The Da Vinci Code,’ with matzo and salsa picante.” That would be the best-case scenario, but “preposterous” is about as far as this talky, cliché-riddled graphic novel gets.

Stavans is a prominent scholar of Latino culture, a Yiddishist, and a Mexican-American Jew who has written some well-received nonfiction about cultural identity. But this isn’t nonfiction: it’s a nugget of interesting history wrapped up in a ludicrous fictional intrigue involving a murder mystery. The amateur detective who gets to the bottom of the case at the risk of his own hide just happens to be one “Ilan Stavans,” a Mexican-American Jewish scholar of Latino culture who… and so on.

If you wanted to be charitable, you could say that Stavans is writing in the tradition of authors who have created fictional versions of themselves, like Jorge Luis Borges or Philip Roth, or in the curious side channel of fictional detectives like Ellery Queen, who are credited with writing their own stories. It is, perhaps, closer to the reality of the situation to invoke the phenomenon known in the world of fan fiction as “Mary Sue”: amateur writers inserting very thinly disguised, spunky, insightful, heroic versions of themselves into their favorite stories.

As “El Iluminado” begins, Stavans is delivering a lecture in Santa Fe, N.M., on the subject of crypto-Jews in the American Southwest — the descendants of Spanish immigrants who had only pretended to convert to Catholicism — and, in particular, on the career of Luis de Carvajal the Younger, a 16th-century Jewish Spaniard in Mexico who was burned at the stake. After his presentation, Stavans meets a young woman, Irina Rodriguez, who fawns over his academic résumé: “Did you get a lot of slack por translating el first chapter of ‘Don Quixote ‘into Spanglish?” Her cousin, Rolando, has died under mysterious circumstances — and it turns out that he believed he was a Jew by heritage, to the dismay of his brother, a Catholic priest.

Stavans wanders around Santa Fe, being warned off the trail of Rolando’s death by various sinister types while he looks for hints of Jewish culture in local Catholic landmarks. Rodriguez tells him about a batch of secret documents that, her cousin told her, “prove everything, who we really are, me, you, everyone….” It turns out that a cabal of New Mexico crypto-Jews is following her and Stavans. Then mysterious interlopers trash Stavans’s hotel room. Guns are waved around. There are schemes and counter-schemes, mysterious hiding places, clues in pastry and statuary, people muttering lines (“he was asking foolish questions”) that are most often heard from moustache-twirling villains, and so forth.

All of this is very familiar territory — and, perhaps, an elaborate excuse for Stavans to devote several sections of the graphic novel to discussing the life of Carvajal, who called himself “El Iluminado,” the Illuminated One. Those interludes are by far the most interesting parts of the book, although they add to its considerable bulk of inelegant expository dialogue. Eventually, Stavans announces, “This is the point in the plot where the protagonist comes up with a plausible solution to the enigma, it can’t be stretched any further.” Admitting that you’ve got a problem is the first step toward recovery.

“El Iluminado” might still have been salvageable if Stavans’s collaborator, Steve Sheinkin, were a particularly gifted artist. Alas, he is not, although he’d not be bad at all by seventh-grade standards. He draws his characters as bigheaded Kewpie dolls; he betrays no particular grasp of how human anatomy works, and he scarcely bothers to draw backgrounds if he can help it. In the book’s few wordless sequences, his artwork is barely capable of making the story comprehensible, let alone engrossing. Stavans doesn’t give him much visually interesting material to work with, in any case: The present-day sequences often involve pages on end of talking heads explaining the plot to one another. In many ways, it’s hard to understand why this story was created in comics form at all. Visual arts — and, by extension, graphic novels — are nicely suited to flights of imagination, but those imaginative flights are not quite the same thing as mere preposterousness.

Douglas Wolk is the author of “Reading Comics: How Graphic Novels Work and What They Mean.”