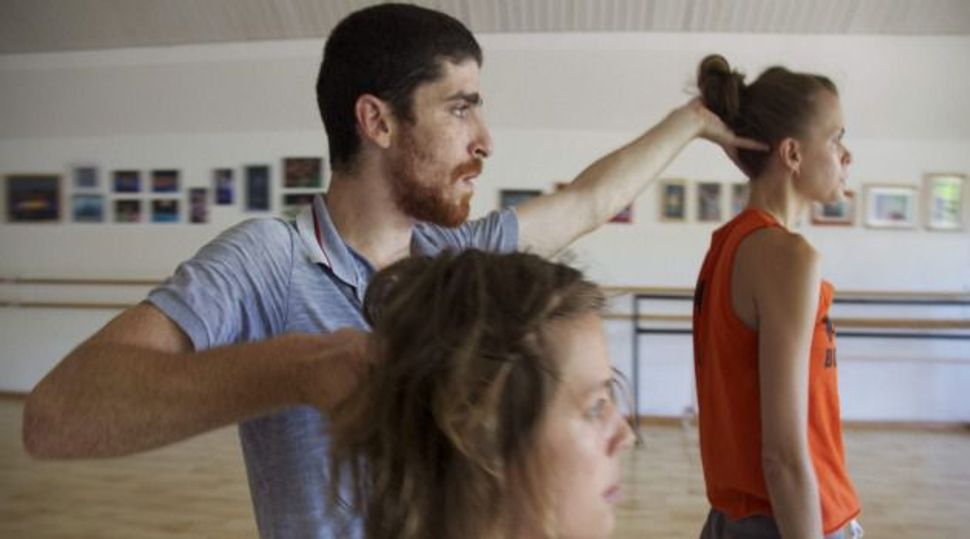 Netta Yerushalmy is fascinated with the relationship between how one dances and where one dances. About two and a half years ago, the Israeli-raised, New York-based choreographer embarked on a choreographic process that spanned two continents. Her aim: to explore the how, where and what, when it comes to creating her dances. With the aid of technology, Yerushalmy and her dancers experimented in the studio, exploring both physical and intellectual ideas about overabundance, for her first evening-length work, “Devouring Devouring.”

Premiering at La MaMa’s Ellen Stewart Theatre from December 13 to December 16, the work, according to Yerushalmy, “doesn’t have a lot to do with eating,” even though the title might suggest otherwise. Instead, she said, “It’s more about this multitude of things [we] take in” amid 21st-century lives lived on overdrive. With her four dancers, she developed the work across six time zones — in New York and Tel Aviv — using webcams and YouTube channels to send choreographic material over the Internet. In Lower Manhattan, where she makes her home and runs her project-based company, she worked with dancers Joanna Kotze, Toni Melaas and Stuart Singer on a regular basis. Meanwhile, 5,000 miles away, Ofir Yudilevitch worked alone in a Tel Aviv studio, where he set up a computer to watch and learn Yerushalmy’s choreography in installments. Then he would record himself and send the results back to Yerushalmy.

“Four hours alone in a studio is a lot longer than it sounds,” Yudilevitch said in mid-November in New York, where he is finally, and gratefully, in rehearsal with the full cast. “There’s a lot of just repeating it without knowing if it’s a good direction, but also, throughout this project, from the beginning I also felt a lot more independent. I have a lot more choices that I can make… both more responsibility and a lot more freedom.”

Yerushalmy was born in South Carolina, where her Israeli father took a job after getting his degree in engineering from the University of Michigan, in Ann Arbor. Her Richmond, Va.-raised mother put her daughter Netta into dance classes at the age of 3. By the time Netta was 5 the family moved to Shorashim, a then-new settlement in northern Israel’s Galilee. When Yerushalmy was a child, dance was something to do but not a professional aspiration, though she continued her studies at Misgav, a community center for northern kibbutzim and moshavim.

At Misgav, “we had these two ladies who were very modern, very progressive and forward-thinking, so I had really good training,” Yerushalmy said. By the time she was in high school she was taking modern dance classes at Kibbutz Ga’aton, the home of Kibbutz Contemporary Dance Company, and ballet at the Bat Dor Studios of Dance, which at the time was in Tel Aviv. After high school she was admitted to New York University’s Tisch School of the Arts, so she chose to forgo her army service.

At NYU, Yerushalmy began to marry the creative impetus to fashion dances she gleaned in Israel with a different modern dance aesthetic. “All those things you were exposed to at a university as a dance student — dance history, music history and art history — all those things were influential” as she found her own artistic voice, she said.

Like so many Israeli choreographers of her generation, she credits some inspiration to Ohad Naharin, Israel’s famed choreographer and the artistic director of Batsheva, the nation’s premiere dance company. “When I was young, I saw Ohad’s early work and [saw] that the influence from Batsheva in [Naharin’s] early years was very strong,” she said, “because the dance [world] in Israel was so much smaller, and that was almost all there was. Also, aesthetically there was a lot from that period that appealed to me. I don’t feel that way at all anymore.”

These days, her work is her own. A recipient of a 2012 Guggenheim Fellowship, she credits her time in New York for allowing her to differentiate her artistry from that of her Israeli compatriots — like her 2009 “Rooms Without a View,” which was an homage of sorts to Jewish American Anna Sokolow’s study of urban isolation, “Rooms”

“Devouring Devouring” is a non-narrative work filled with what the choreographer calls “a multitude of imagery and forms.” In rehearsal the dancers perused art books filled with pictures of Baroque paintings — Caravaggio, Rubens, Velazquez — in search of austere shapes and forms to replicate and expand upon. “We started drawing this dichotomy between this very formal, austere, linear movement,” Yerushalmy said, “that has to do with the body moving in space and delineating lines, more like abstract painting, and that is juxtaposed with what I call postural imagery.” But this is done with a wink, suggesting not the 17th century, but the 21st.

For Yudilevitch, there’s much he’s learning about dance outside Tel Aviv in his first visit to New York. The Haifa native said, “I’m still figuring things out” about the different approaches to contemporary dance in Israel and in the United States. “What we’re getting from the states dancewise,” he said, “is very old information…. The new information is coming from Europe.” As a recent dance student, he said that his modern dance training featured the technique of 20th-century icon Martha Graham rather than the in vogue release technique that American dancers now favor. For Yerushalmy, who remains cognizant of her roots cultivated in two worlds, “I always feel like I carry with me the flavors from growing up in Israel, no matter where I am.”

Lisa Traiger is married to an avid Israeli folk dancer and writes on the performing arts from Rockville, Md.