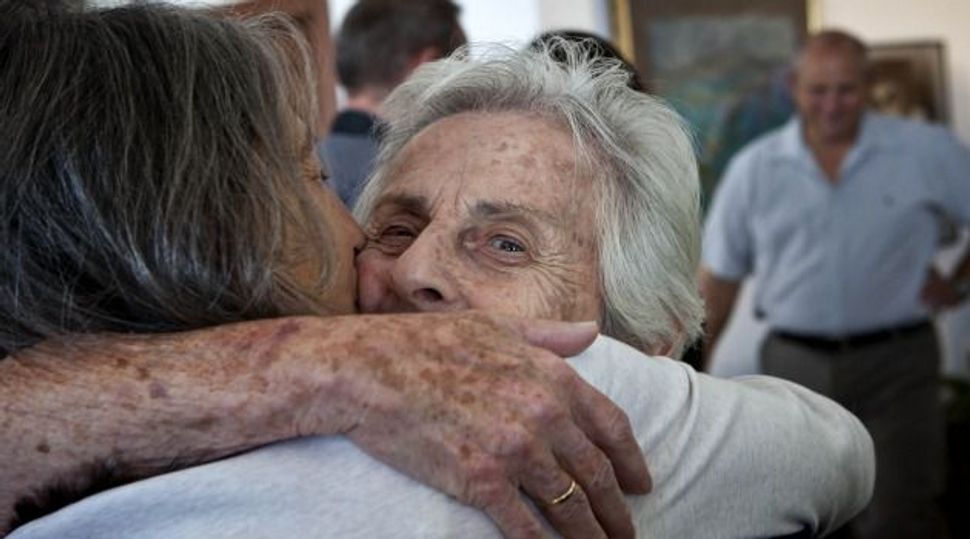 A Reunion Postponed: Judit Shaked left Czechoslovakia for Denmark in 1939. Recently, she reunited with some of the survivors of the second kindertransport. Image by Eliska Blazkova

One hundred and fifty Czech teens, selected by the Jewish Agency’s Youth Aliyah and the Denmark branch of the Women’s International League for Peace and Freedom, were taken, in October 1939, to Denmark, then scattered across the countryside in foster homes. One hundred and fifty Jewish teens were sent to work on farms; they were cared for, they were loved, but they were also, understandably, desperately afraid for those they left behind.

For a time they received mail. And then the mail changed: It became 25 word telegrams, missives sent via the Red Cross, weak assurances that everything at home was okay. What did that even mean? There was no time to think. And then the kids were on the move again.

Some, as the Nazis closed in on Denmark, were ferried by Danish fishermen — along with Danish Jews — to Swedish safety. Others were taken overland by bus and train, then boat, then train again, over weeks, and through six countries, to be resettled on youth kibbutzim in Palestine.

As word trickled out of Europe, as the news of the camps and of the genocide came to them in Sweden and Palestine, they understood what being a part of that 150 had meant. Most of them never saw their families again; the youth aliyah had become their brothers and sisters, their cousins and aunts.

We have all heard of the thousands of children sheltered by the British, some 10,000 kids brought out of Vienna and Berlin, Czechoslovakia and Poland, in the days before the doors to free Europe slammed shut. But for 75 years, few knew the story of this forgotten Czech Kindertransport to Denmark. In October, a reunion was organized by a Czech journalist named Judita Matyášová. A book by Matyášová is now in the works, as is a film by her. And finally these survivors are speaking.

For the first 15 years, there wasn’t much unusual about the life of Judith Shaked, née Stiasny. She lived with her parents, Irma and Jakub Stiasny, and her brother, Ota, in the town of Rajhrad near the Czech industrial city Brno. The Stiasnys were Jewish, but not terribly religious; as they were the only Jews in their town, they had no Jewish communal life to speak of, so Sabbaths and holidays were observed, and the kids studied with a rabbi in another town to learn traditions. Shaked hardly felt different at all. She knew, of course — they all knew — what was happening in Germany and in nearby Austria, but no one felt that democratic Czechoslovakia would succumb. In the fall of 1938, her father’s health failing, Shaked went to live with an aunt and uncle in Prague. There she was introduced to Zionism.

“In the spring of 1939, the Youth Aliyah school was founded in Prague,” Shaked explained. It was understood “that soon Jewish pupils will be barred from their schools,” and the Youth Aliyah school was created to provide a seamless transition in education. Shaked registered and was accepted. “All the pupils were members of Zionist youth movements, and many of them were my friends from Young Maccabi,” she recalled. “We studied mostly Judaism.” October 24, 1939, Shaked traveled to Denmark with 25 other teens, the second group of the aliyot. She was 15 years old.

“It was difficult to say goodbye to our parents, but it was much more difficult for our parents to make the decision to send us away,” said Ann Steiner, née Federer, another member of Youth Aliyah. She is one year younger than Shaked. Steiner spoke to me from Israel, where she’d gone for the reunion; she lives in Canada: “It was very difficult for my mother — I heard her crying every night — and for my father, too. But my father said the situation is like we are in a burning house and the only way to be saved is to get out.”

“I was taken in by the family of Christian Olsen,” Shaked explained from her home in Israel. The Olsens were older, with eight grown children. “The conditions there were not easy. It was a humble two-room house with no electricity and no running water, but my foster parents received me warmly and took care of me as much as they could. I treasure them for this and am grateful to them all my life.

I worked at home and also in the fields, in the vegetable garden. I learned to milk. All these were chores I had not done before, but I bore it. It was harder to adjust to the conditions of life, especially the lack of any private corner. Besides, I missed home very much. I was sad. Once a week we would meet, all the friends from the neighborhood, in a nearby town Naestved, in what was called the Centrum. We rode there on bicycles, 10 to 15 kilometers. We had instructors from He-Halutz, members of Hachshara. In our meetings we studied a little — Hebrew, Jewish history; we discussed current events; we played. There were different cultural activities, and mostly we talked, exchanged impressions, experiences, thoughts. These meetings with friends were my comfort and made the difficult time easier.”

Boys who were old enough began to agitate to enlist in allied armies. Some of the girls were sent to nanny for families. Dov Strauss remembers this time fondly. His Danish family embraced him and remained a part of his life forever. He continued to receive letters from his parents, and from an uncle who had escaped to Argentina.

Beginning in 1940, handfuls of the students were led overland and sea to Israel. Strauss was one of the first to go, a journey that went through Finland to Leningrad to Odessa, crossing the Black Sea by boat, then by train from Istanbul to Syria and Lebanon, finally to Rosh HaNikra. Shaked was among those chosen to travel to Israel in the next group. She entered Haifa on March 21, 1941. The ordeal took three weeks on buses, luxury boats and third-class trains. Strauss went to Kibbutz Geva.

Shaked went to Ben Shemen, a youth and education village. Life was good, but she was anxious. “News of what was happening in Europe began to arrive,” she said. Letters stopped, except for those rare, short, letters through the Red Cross. “At the end of the war, I found out my family’s fate: My parents and brother were deported to Terezin in 1942, and from there to Auschwitz in October 1944. All three perished. Only a few from my extended family survived. In those days I became close to a member of my group (who had also come through Denmark, but was not Czech). I married him in 1947. Before that, in 1945, we were among the founders of a new kibbutz, Gezer, and we lived there.”

But her trials were not over. She’d barely discovered that her parents had been killed when her young husband was killed in the War of Independence while defending the kibbutz.

“I myself was captured, along with many others. Half a year later, our daughter, Edna, was born. She passed away before her second birthday,” she said. At the end of the war, Steiner also learned that no one had survived. “I had contact with my parents until 1942. After that they went in a transport to Terezin.” She never heard another word from them.

Steiner went to Sweden in October 1943 and remained there until Europe was fully liberated. As the war ended, she made her way backward, stopping first in Denmark. “My [foster] family, they were happy, very happy, to see me; it was like coming home. They wanted me to stay in Denmark,” she said. But they understood when she said she had to see if there was anyone to find in Prague from her biological family. Her boyfriend had volunteered in the British army; he was returning to Czechoslovakia. So Steiner did the same, with no funds, on a desperate march to look for survivors: “I returned to Prague in 1945, looked to see if someone else had come back.” Of her entire extended family, only one aunt survived. In Prague she met her boyfriend again. They married in 1945 and remained together in Czechoslovakia until 1949, a year after their son was born. Then they took their first opportunity to migrate away from Communism and move to Israel. They left for Canada in 1952.

Shaked got married to her second husband four years after the War of Independence took her first. “I had the privilege to live with [my second husband] for almost 60 years, until he passed away suddenly last year. We have a son and a daughter, five grandchildren and a (newborn) great-grandson,” she said. “I lost touch with my friends from Denmark when I came to Israel and they stayed in Denmark. Later we scattered all around the globe. The ties of friendship with the few who lived in Israel remained. This was so until Ms. Matyášová contacted us and began to research each of our fates and to document it. Through her we found out what each of the friends has been through — and mostly we had the chance to renew our friendship. Unfortunately, it is only natural, but [only a] few of us remain.”

The survivors of the Czech transport are all quick to list what they gained, even as they acknowledge what they lost. As with all stories of the Holocaust, there are no happy stories of survival: There was too much pain in being the only one to remain. And yet, painful as their stories are, this small transport created 150 worlds, dozens upon dozens born into the subsequent generations, all descending from this one mini-ecosystem of Zionist youth. And while their stories are not happy ones, the “kids” are now able to acknowledge the joy that having these friends gave them, at a time when the rest of the world was dark.

Sarah Wildman is a visiting scholar at the International Reporting Project at Johns Hopkins SAIS. She is working on a book for Riverhead on the lover her grandfather left behind when he fled Vienna.