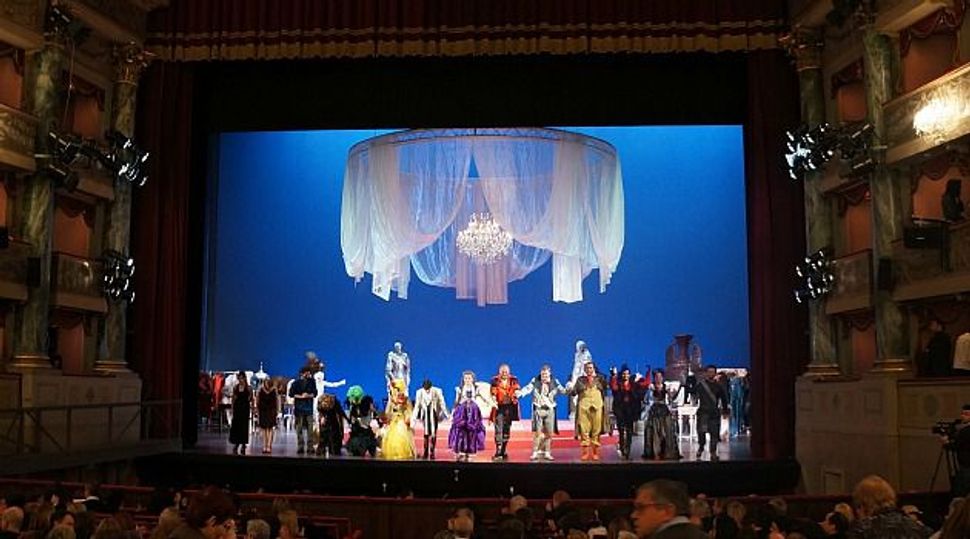 Moments before he passed away, in 1945, composer Aldo Finzi whispered the words, “Fate suonare la mia musica” (“Let my music be performed”). Recently, on a particularly cold December night, his last and greatest wish was fulfilled in the 19th-century Donizetti Theatre in Bergamo, less than 35 miles away from the legendary La Scala Opera House, where Finzi’s opera “La Serenata al Vento” (“The Serenade to the Wind”) should have been performed nearly 70 years ago.

Born in Milan in 1897 to a middle-class Jewish family with a passion for music (his aunt was a soprano), Finzi had already established himself as a promising composer by the time he was 24. His works had been published by the famous Casa Ricordi, among them, several pieces of chamber music, a few symphonic poems and his masterpiece, “La Serenata al Vento,” a comic opera based on a libretto by Carlo Veneziani.

The Serenata tells the story of the exuberant Loly and her pedantic tutor, Leandro, who enters Loly’s window by mistake to get away from his secret lover’s place. This incurs the wrath of her strict father, Colonel Dagoberto, resulting in a crescendo of misunderstandings and comic moments. When, in 1937, the Milan La Scala issued a contest for a new opera, to be performed during the following season, Finzi entered his opera into the competition.

“It seems like yesterday,” recalled Bruno Finzi, his son, who is now 87. “I was walking with my father in the famous Galleria Vittorio Emanuele, and the master of La Scala, Riccardo Pick-Mangiagalli, who was sitting on the jury of the contest, came to us. ‘I should not say anything,’ he told my father, ‘but I wanted to offer you my congratulations. The Serenata won. You can start to think about the production, the cast, the scenes.’ My father was beside himself with joy and pride.”

But for Jews, dark times were approaching fast. The official announcement of Finzi’s victory never came. In 1938 the Anti-Jewish Laws were promulgated in Italy. Finzi could not work anymore. He was offered a job as a musician in Chicago, but he did not want to leave his family. In 1943 the Finzis went into hiding.

Still, music remained an important part of Finzi’s life. When fascist guards arrived to arrest him and his family, the guards happened to be more interested in robbing the Finzis of valuables than in performing an actual arrest, so the whole family managed to get away and, eventually, find another hiding place. To express his gratitude to the Lord for such a narrow escape, Finzi composed his famous “Salmo per Coro e Orchestra” (“Psalm for Choir and Orchestra”). However, Finzi was both physically and morally exhausted by the blows he had suffered in past years, and he died a few months later, before the war had ended.

After Finzi’s death, his scores went to his youngest sister Ada Finzi, and then to a schoolmate and friend, musicologist Giulio Confalonieri. When Confalonieri died many years later, in 1972, a housekeeper called Bruno Finzi, and told him: “I have a trash can full of your father papers. Do you happen to be interested in them?”

Bruno Finzi kept them. In the 1990s, an old friend of his, a pianist, was looking for new music, and so the younger Finzi offered his father’s scores. Thus began the rediscovery of Aldo Finzi’s music. This month’s debut of “La Serenata al Vento” featured the Donizetti Theatre’s orchestra; the singers were all Israelis originally from the Former Soviet Union, while pupils of Hamartef Theater School and Bezalel Academy of Arts and Design, both in Jerusalem, made the sets and costumes. Shortly thereafter, the opera was also performed in Jerusalem for the first time.

“The first time I protested what had happened to my father was in 1950,” Bruno Finzi explained presenting a concert of his father’s music a few days before the Serenata debut. “I was 25, and I caught a train and went to Rome. I managed to speak with an undersecretary to the prime minister. He listened to my story, and he offered to help me to have the music performed in Bergamo’s Teatro delle Novità. But I vehemently refused: My father’s music had to be performed in La Scala or nowhere else, I thought. Today, I am not disappointed that La Scala doesn’t show any particular interest in my father’s music. On the contrary, I feel grateful to La Scala, because at least the jury of the contest did not choose another winner over my father.”

Rossella Tercatin is a reporter for Pagine Ebraiche, the magazine of Italian Jewry.