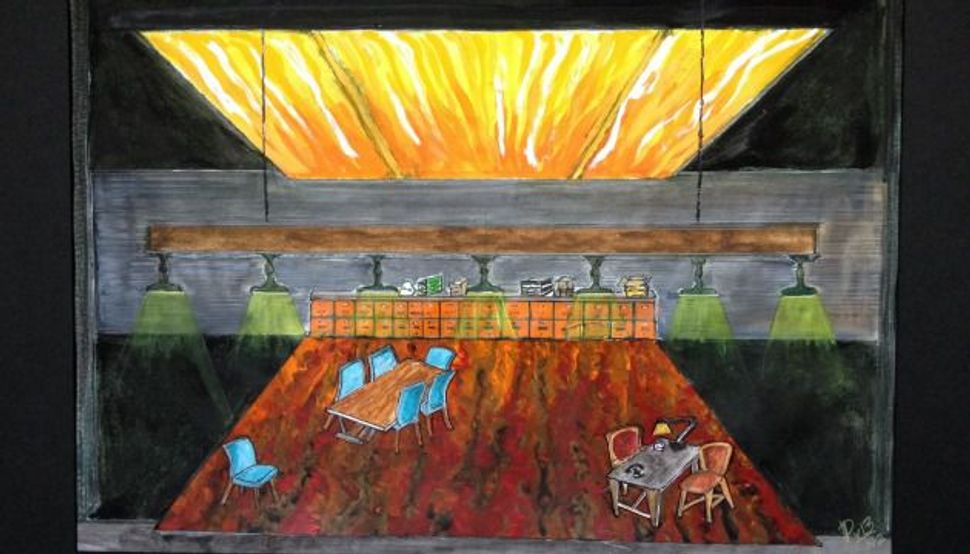 For Academy Award-winning designer Patrizia von Brandenstein, the process of designing “The Anarchist” began with a series of exchanges with the drama’s author David Mamet. A visual consultant on the Mamet-scripted film “The Untouchables,” von Brandenstein more recently designed a not-yet-aired HBO biopic about Phil Spector that Mamet wrote and directed.

“Mamet and I got along famously. I’ve always admired his ability both to abstract ideas and to physicalize abstract thought,” von Brandenstein told me when I met her in November in her Chelsea apartment a week before “The Anarchist” opened. She shares the apartment with her husband, designer Stuart Wurtzel (“Hester Street,” “Hannah and Her Sisters”).

At the beginning of their collaboration on “The Anarchist,” which starred Patti LuPone as an imprisoned terrorist and Debra Winger as a sort of warden, Mamet encouraged von Brandenstein to contemplate the concept of prison. “He told me that there are all kinds of prisons,” she said. “He said, ‘Solzhenitsyn writes about some and Hemingway writes about some and I write about some, but there are many different kinds and people often make them for themselves. Sometimes, long before they go to prison, they are in a prison of their own creation.’”

She began by researching old office furniture. “I would mail him my sketches and he would say ‘nope, nope, nope, think again,’” she said. “Sometimes, he would send me a book which had nothing to do with the subject of his play, at least not apparently. We talked a lot about the works of Dawn Powell.”

Occasionally, von Brandenstein and Mamet discussed politics — she calls herself an “old lefty” and Mamet a “Goldwater Republican,” but says these differences didn’t affect their working relationship. “I’ve worked with big-time crazies, I don’t care what their politics are,” she said. “Mamet’s very intellectual and he has found comfort in faith. As a secular Jew, I don’t really understand that in the modern world, but I can applaud people with that kind of commitment.”

As von Brandenstein continued working on “The Anarchist,” her designs became more abstract. “I found myself losing more and more of what was real,” she said. “Finally, I thought of a huge wall — nothing so common as brick or cinder block — a wall that was both concrete and abstract. Ultimately, we ended up with a wall of file cabinets across the back of the stage.”

As far as colors were concerned, Mamet gave von Brandenstein a book of airplane colors, suggesting she study World War II planes. She sketched orange file cabinets, a red floor, a golden yellow ceiling, and turquoise chairs. But ultimately, Mamet decided the colors were too vibrant and would detract from the play — an apt metaphor, perhaps, for the Broadway production itself, which suggested an artwork from which all color had been leeched.

“Everything became gray and brown. All that was left was the turquoise chairs,” von Brandenstein said. “It killed me to give up that red floor. But the more I think about it, the more I think Mamet was right. His characters are both imprisoned in a way, and that’s expressed very well by the lack of color.”