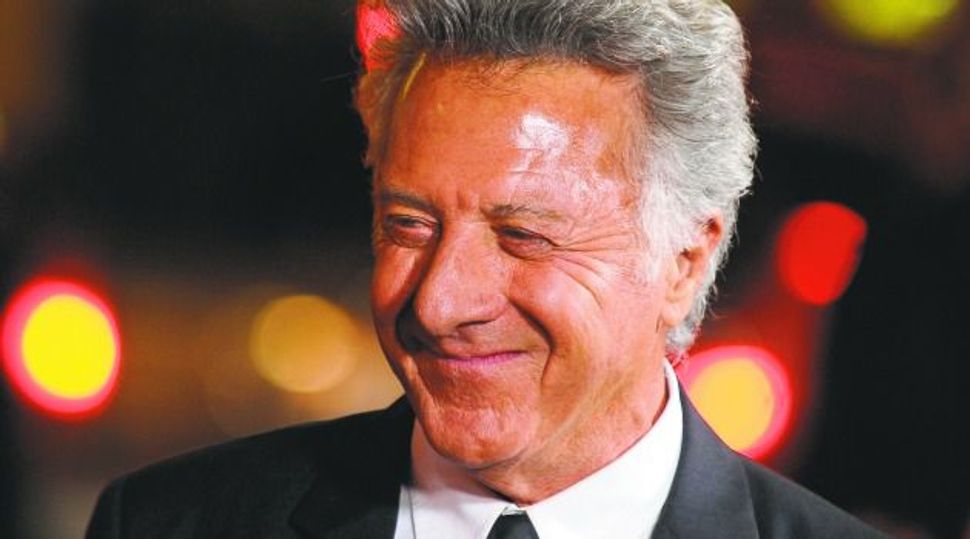 Dustin Hoffman’s directorial debut, “Quartet,” is a film set in a British home for retired musicians and singers, starring Billy Connolly, Tom Courtenay, and the incomparable Maggie Smith. It’s about love and friendship and getting older, and is funny and sad and a total delight. It’s a film that leaves the audience in a good place — which is where Hoffman, 75, seems to be now. The actor says that he is currently in “the richest time of my life — both personally and professionally.”

He spoke to the Forward’s Curt Schleier about the film, his resurgent Jewishness and his perfectionist reputation.

CURT SCHLEIER: I loved the film. Are you confident about it?

Dustin Hoffman: I’m Jewish, so I wouldn’t say confident. I would say more confident [than normal].

I’ve read that you had a secular upbringing.

I’ve never said secular. I had a non-religious upbringing. My father was an atheist, I have a sibling, my brother, and neither of us were bar mitzvahed. Luckily we got circumcised, but that was about it.

Did you live in a Jewish neighborhood?

No, as a matter of fact we moved around a bit. My father kept trying to upgrade himself. He would fail and we would downgrade to a lower neighborhood. During a long stretch of my formative, pre-teen years I lived in what I would call an anti-Semitic neighborhood. I got a few “dirty Jews” and got beat up a couple of times. It was substantial enough for me to always deny my being Jewish as I was growing up. If someone asked me what religion I was, I would pretend I didn’t understand the question. I’d say “I’m American.”

But you’ve become more religious now, thanks to your wife, right?

My first marriage, my wife was Catholic. We did get married in a church, but with a rabbi present, so it was a kind of two for one. That lasted only a few years. Then my second marriage was to Lisa. We’ve been married 31 years. We have four children of our own, two boys and two girls. And through Lisa’s leadership, both boys were bar mitzvahed and both girls were bat mitzvahed. We celebrate Jewish holidays, which I’d never done. I don’t have any memory of celebrating holidays growing up that were Jewish.

Do you know any Hebrew or Yiddish?

I don’t read any Hebrew. I know a bissel of Yiddish, because my grandmother, who lived in our house from the day I was born until she died when I was 16, when she and my mother wanted to talk privately in front of the kids, they spoke Yiddish and I picked up a little. Do you write for the Jewish Daily Forward? Wasn’t it [where] Isaac Bashevis Singer who was responsible for trying to keep Yiddish alive [was published]? I do love him as a writer.

When I interviewed Paul Giamatti, who costarred with you in “Barney’s Version,” he told me an interesting story about a cemetery scene and a kippah. Do you remember it?

It was a debate. In that particular instance, if my memory is correct — it isn’t always — the producer wanted us to wear yarmulkes and we didn’t want to because of what we felt was our characters’, to use your word, secular background. I called my dear friend, who is a rabbi and actually married my wife and I and two of my daughters. His name is Leonard Beerman. I got him on the phone. We held up shooting because it was such a contentious issue. Rabbi Beerman said, based on what you said about the way you as a character and your son [played by Giamatti] believe, I think it’s optional whether you wear a yarmulke in a cemetery. So we did not.

Are there other instances where you brought your Jewishness to work?

No, because I don’t have a Jewish background in the sense that we’ve been talking about. I’ve always felt I was a Jew. It’s an internal feeling. I also feel I’m a Russian Romanian Jew because my father’s people were from Kiev and my mother’s people were from Iaşi, meaning I love mămăligă and I love borscht and vodka. Also, I think there’s a specific humor I’ve always been attached to, and there’s no other way to put it. I have a Jewish sense of humor.

You have a reputation for being a perfectionist, something you spoofed in “Tootsie.” Is that accurate?

I can recognize bad work, particularly my own. I’ve never swayed and convinced myself that work that wasn’t first rate was first rate. Unfortunately, you work with people, particularly if you’re an actor, where the director or producer delude themselves that what they’ve just done is great or first rate and they can move on. I can tell in the first three days of shooting if it’s going to be problematic because you see the director being satisfied before he or she should be. And that’s never failed. Having said that, my friend Murray Schisgal (who co-wrote the screenplay) was on the set of “Tootsie.” I would ask, ‘what do you think, Murray?’ He’d never say, ‘good.’ He’d say, ‘we’re not in trouble,’ which is kind of a Jewish thing to say. And that’s what I felt when we were making this movie: We’re not in trouble.

Yes. It’s a very easy answer. My first directors, Mike Nichols (“The Graduate”) and John Schlesinger (“Midnight Cowboy”), were not like many of the directors who followed, so I thought that was the way movies worked. Mike Nichols rehearsed the principals for months, so we were comfortable in what we were doing. Schlesinger worked differently. Jon Voight and I were in a room with him and the screenwriter, Waldo Salt. He [Schlesinger] had a tape recorder and had us improvise every scene so it could be coordinated into the script. And he didn’t stop until he was done. And then there are some directors who weren’t motivated in that way and were critical of me. They were critical of me in print and that’s something I’ve never done and won’t do.

How were you as a director?

I was less demanding than the first two directors I worked with — and I am very demanding. And Maggie Smith is equally so. There were days when, on the third take, Maggie would say “I don’t know what the [blank] this scene is about” and lose her cool. It was wonderful because she was right. I don’t know whether these stories are true but there are certain stars who they say after one or two takes walk off the stage. Give me someone like Maggie Smith anytime.

(At this point, Hoffman’s assistant interrupts to say that our time is up.)

But I didn’t have a chance to fawn over you.

Oh, well, that’s okay. Do it in print. Are you in New York? We’ll go out one day. I think you’ll like my friend Murray Schisgal.

If you actually call me to go out for drinks, I’ll buy.