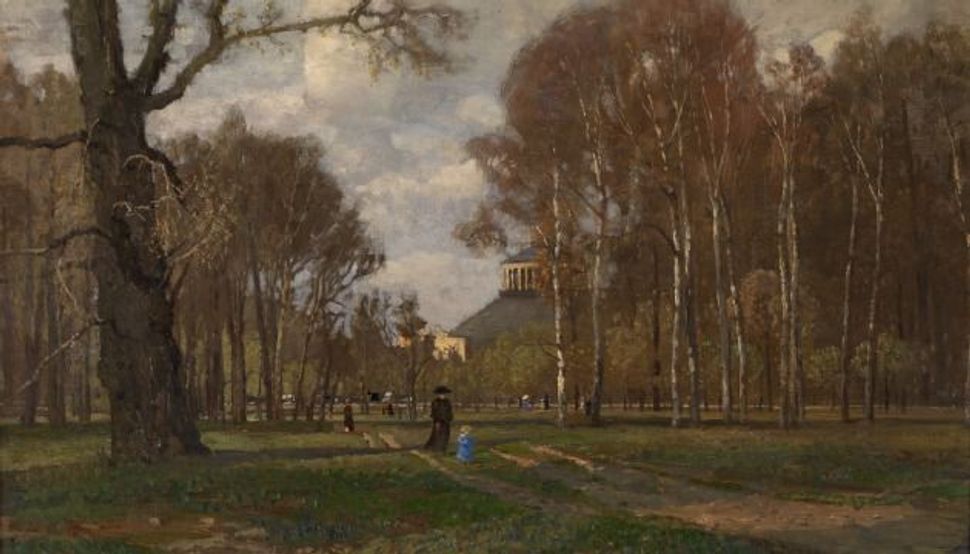 The impressionist artist Tina Blau was known for her idyllic landscapes. Image by Wikimedia Commons

When writing of great Viennese artists, influential historians such as Carl Schorske in his landmark “Fin-de-siècle Vienna: Politics and Culture” do not even mention sculptor Teresa Ries (1874-1956), Impressionist landscape painter Tina Blau (1845-1916), and figurative artist Bronica Koller (1863-1934). But posterity can play strange tricks. And now, in “The Memory Factory: The Forgotten Women Artists of Vienna 1900” author Julie Johnson makes a strong argument that these once-celebrated Jewish artists have been unjustly overlooked.

Johnson, a University of Texas art historian, notes how all three women shared a strong sense of self-worth and a penchant for making bold statements, and not only artistic ones. The Russian-born Ries was expelled from the Moscow Academy of Fine Arts for scolding a teacher who did not evaluate her classwork. After she was established as a celebrity sculptor in Vienna, Ries — whose admirers included Stefan Zweig and Mark Twain, who sat for a portrait — penned her 1928 memoirs, “The Language of Stone,” a powerful, feminist document. In it, Ries dismissed critics and museum-goers who claimed that her heroic, sometimes tormented marble carvings were influenced by Auguste Rodin: “That is often the first impression of lay people, somewhat in the way that for Europeans, all blacks look alike.” Ries further dismissed the “opinion that the man is necessarily the inseminator, also in art,” and added that her works, especially a once-famous statue of “Lucifer” actually preceded Rodin’s “Thinker,” which supposedly influenced it.

In a 1902 self-portrait, an oil on canvas now in The Vienna Museum, the statuesque Ries, garbed in her artist’s smock, strikes a haughtily prideful pose, challenging the viewer much as she challenged readers in her autobiography. The artist’s fiery temperament can be deduced from another passage from “The Language of Stone,” describing her 1909 marble sculpture “Eve” which depicts the Bible’s first woman in a cowering fetal posture: “I could not understand why the woman could not gain a better position in history, that the secondary role in the history of humankind seemed to suffice — woman, in whose womb humanity begins and ends! I could not understand why the women of my time were content to rely on the moody love-whims of men. And yet, this seemed to be the fate of women since the time of Eve, since the first sin.”

Blau, whose exuberantly soaring depictions of trees in Vienna parks brought a light-drenched palette to subject matter usually dealt with in somber Old Master fashion by contemporary male painters, was less public in her statements. Yet like Ries, she possessed a firm conviction of her own value.

In a 1900 letter to Auguste Schaeffer, a friend and teacher, Blau wrote: “If I were not a woman, my works would be viewed not only as independent but also ahead of their time in Vienna, just as they were in Paris and Munich. I am valued by my colleagues, but nonetheless when it really counts for me to be treated as an equal, to be honored and included because of the value of my work, I am always left out.”

Blau specified that she had never been granted any major public commissions, despite the fame of such work as her 1882 canvas “Springtime in the Prater,” an idyllic depiction of a venerable public park in Vienna’s Leopoldstadt district which was purchased for the city’s Belvedere picture collection. This occurred, Blau informed Schaeffer, because of her work’s “outstanding painterly qualities” and not because its setting was a local sentimental favorite. Indeed, the high soaring trees in “Springtime in the Prater,” dwarfing a woman and young girl who have paused beneath them, seem to express energetically exuberant aspirations, not mere gemütlichkeit, that cheery coziness which is a key element of Viennese kitsch sensibility.

As for Koller, a painter of interiors who focused on domestic subjects, she was no mere “painting housewife” as she was dubbed by art critics, any more than Pierre Bonnard or Edouard Vuillard were painting house-husbands. A friend of Egon Schiele and Gustav Klimt, Koller won rave reviews from the noted critic Berta Zuckerkandl, who was born in Vienna of Galician Jewish origin. In 1911, Koller painted a monumental portrait of the contralto Emilie Bittner, the wife of the Austrian composer Julius Bittner, a close friend of Gustav Mahler’s. In this splashily decorative painting, which juxtaposes the sitter against wildly patterned wallpaper, Bittner expresses Gertrude Stein-like sedentary solidity, cradling her belly with her arms.

Koller’s “My Mother,” an oil on canvas from 1907, is rather more mysterious and cryptic than “Whistler’s Mother” despite being a side-view of a maternal figure, like that famous 1871 painting. Instead of being an idle object of filial adoration like Mrs. Whistler, Koller’s mother is hard at work on embroidery, with three-quarters of her face turned away from the viewer. “My Mother” shows an Austrian Jewish woman defined by labor, whose personality and identity seem so totally absorbed in what she is working at that the most essential aspect of any portrait, her face, becomes of secondary importance.

Much as she innovated in portraiture, Koller imaginatively renewed another traditional genre in a 1910 “Still Life with Fruit and Parrot” which mixes inanimate objects, including pears and grapes, with a definitely animate bird which may contain a measure of self-identification. After Koller died of ovarian cancer in 1934, a painter friend described in a published obituary how he had not long before painted her, “palette in hand, white haired, with the face of a merciless bird who inspects the fruit of still life.” Whatever her subject matter, Koller’s inspired view of interiors had a quasi-religious aura, as she wrote to her husband in 1909: “My house is like a temple. Peace and quiet surround me here. May God preserve it. That is often my wish.”

By the time the 1938 Anschluss destroyed any such sacred tranquility, Koller and Blau were already dead, and Ries had fled to Lugano, Switzerland where she survived the war but never again returned to Austria. Even before the Nazis eliminated all evidence of Jewish creativity, these three artists had long worked in a parallel sinister context of rank misogyny. Johnson cogently points out: “As a woman and a Jew, [Blau] was doubly Other in the city where Otto Weininger’s ‘Sex and Character,’ which popularized theories of the inferior creative potential of women and Jews, had been a bestseller.” Such theorists abetted the continued postwar oblivion of Ries, Blau, and Koller, as did art historians who inadvertently also buried the subject. That a change is overdue is one of the valuable lessons offered by Johnson’s book.