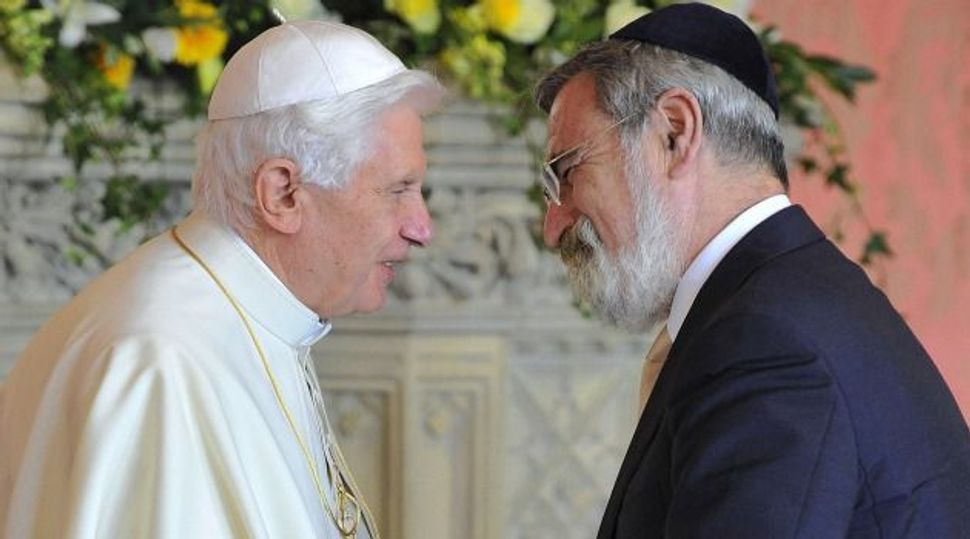 The Great Partnership: Science, Religion, and the Search for Meaning
By Jonathan Sacks
Doubleday, 384 pages, $28.95

Jonathan Sacks, whose long tenure as chief rabbi of the United Hebrew Congregations of Great Britain and the Commonwealth expires in March, when he turns 65, has for decades been an inspiration to many Modern Orthodox Jews, who are impressed by his synthesis of erudition in Western philosophy with a steadfast defense of Orthodox doctrines and norms. At the same time, Sacks has proved a deep disappointment to equally as many non-Orthodox British Jews, mainly on account of their widespread perception of his having caved all too often to the demands of Orthodox fundamentalists, including members of his own beit din, or rabbinical court, thus exacerbating, rather than healing, historic rifts that plague Anglo-Jewry.

In the autobiographical excursions that are scattered throughout his latest book, Sacks discusses his complex personal background — his years of philosophical studies at Oxford and Cambridge universities before entering the rabbinate — that, combined with his formidable rhetorical gifts, set him apart from the majority of his Orthodox colleagues. Still, the veneer of modernity and intellectual sophistication has often been pierced by his staunch defense of strict Orthodoxy. This has had the effect of exacerbating old and still-open wounds in a deeply divided British Jewry. Most egregious among numerous incidents was Sacks’s stunning insult to the now late rabbi Louis Jacobs — the most formidable Judaica scholar and theologian in the history of the British Rabbinate (Jacobs was voted “the Greatest British Jew ever” in a poll taken just prior to his death by London’s Jewish Chronicle).

Jacobs’s alleged deviation from the traditional Orthodox dogma regarding the literal revelation of the Torah originally appeared in his book “We Have Reason To Believe,” and ultimately resulted in his excommunication from the Orthodox establishment, a fact later underscored by Rabbi Sacks’s refusal to allow Jacobs to participate in the aufruf ceremony for Jacobs’s granddaughter’s forthcoming nuptials. As England’s newspaper The Daily Independent wrote in its 2005 obituary of Jacobs: “Rabbi Jacobs was not called up to the Reading of the Law [Torah] at an Orthodox synagogue in Bournemouth, on an occasion prior to the marriage of his granddaughter, because of the intervention of the court of the Chief Rabbi Sir Jonathan Sacks.”

Sacks’s defenders have long insisted that he has been constrained by his position as chief rabbi of the United Synagogues, an Orthodox organization whose political and theological demands have prevented him from being free to speak his mind or from openly displaying the deep respect he in fact harbors for those who do not share his convictions. Many have speculated that with his imminent retirement from the Chief Rabbinate, Sacks would become unfettered by such restraints and would go on to become an important spokesman for a more ecumenical Judaism.

The first test of this hopeful thesis is the recent publication of “The Great Partnership: Science, Religion, and the Search for Meaning,” and the results are not entirely gratifying. Here, Sacks presents a rich, grand, powerful and often deeply moving testimonial to his personal faith. But in the end, readers will be left with little more than a highly eloquent and intellectually sophisticated defense of the Orthodox status quo. In the book’s first part, “God and the Search for Meaning,” Sacks posits a wide assortment of psychological, historical and philosophical, and even some original linguistic, theories as to why religion has from time immemorial appealed to some while others have remained nonbelievers. Into this investigation he introduces his own personal trajectory from a doctoral candidate in philosophy under the mentorship of mostly atheistic Cambridge and Oxford dons to the position of chief rabbi. A crucial moment in that personal voyage was Sacks’s encounter in Brooklyn with the late Lubavitcher rebbe, whom Sacks dubs a “holy man” and credits with having “created leaders on a scale unprecedented in Jewish history.”

The central argument of this section of the book is that humans are by nature “meaning seekers” and that religion, not science, is capable of offering satisfying answers to the quest for life’s true meaning. Science, he nicely formulates, helps to explain the immanent how’s of the human condition, but cannot address the transcendent why’s of humanity’s mission. Sacks insists repeatedly that his goal is not to discredit the scientific worldview or to polemicize with atheists, whom he accuses of intolerance. Rather, he claims to believe that religion and science need each other and would be mutually enriched by a harmonious relationship.

But in the book’s second part, “Why It Matters,” Sacks adopts a stridently combative tone, setting out a series of aggressive arguments for the critically important role of religion as the guarantor of nothing less than the survival of Western civilization. This constitutes an abrupt turn from the spirit of openness and conciliation, or “partnership,” promised at the book’s outset. This section, the book’s longest, draws stark red lines between the religious and scientific worldviews, in an extended and unforgiving polemic against secularism, filled with dark warnings about the dire consequences to human society when the public influence of religion is overshadowed by secularism.

A prefatory chapter, “What We Have To Lose,” enumerates the colossal harms inflicted by secularism. Absent religion, Sacks sternly pontificates, human dignity is degraded and life’s sanctity is lost; true (namely, inner spiritual) freedom is replaced with illusory political liberties; the foundations of morality are undermined by a cynical atheism and by cruel scientific determinism; in the godless, Nietzschean world Sack portrays with great drama, relationships are threatened, and marriages and families are destroyed by the decaying of their crucial spiritual dimension.

After this relentlessly bleak 100-page polemic, Sacks finally, but far too briefly, addresses the long history of horrendous evils that have been committed, and are still committed today, in religion’s name. To this formidable problem, which lies at the core of the critiques of religion by “new atheists” such as Richard Dawkins, Daniel Dennett and Sam Harris, the chief rabbi devotes his shortest chapter, “When Religion Goes Wrong.” It is, alas, a woefully inadequate and apologetic 16-page concession to the crimes of religion that essentially dismisses them as aberrations from true faith.

What is so striking about his treatment of “religions gone wild,” aside from its brevity, are the two most prominent problems admitted by Sacks: fundamentalism and messianism. This is quite odd, since Sacks himself is a warm friend and an outspoken supporter of the most prominent Jewish messianic movement of our time, Chabad Hasidism. And, insofar as he has insistently ignored modern, critical biblical scholarship, he can be said to be a fundamentalist, albeit a very sophisticated one. On this matter, Sacks’s narrow definition of fundamentalism as connoting a literalist reading of the Bible and other sacred Scriptures is deeply misleading. And he uses this inadequate depiction to argue, most unconvincingly, that Judaism has never been fundamentalist on account of its midrashic and philosophical traditions.

The problem here is that all manners of non-literal biblical interpretation are the very métier of many extreme religious fundamentalists, from the mullahs of Iran to the Haredim of Bnei Brak. The notion that such extremist clerics’ creative, nonliteral readings of their respective scriptures absolves them of the “sin” of fundamentalism is, quite simply, absurd. For the real, core belief girding all religious fundamentalisms — Jewish, Christian and Muslim — is not a literalist approach to the meaning of Scripture, but rather an insistence on its inherent textual perfection as inerrant, immaculate and unchanged divine writ. Fundamentalists of all faiths engage in elaborate exegeses of their holy books; what they refuse to allow is that the content, not the interpretation, of these texts is anything less than the precise and perfect word of God

Indeed, it was England’s fundamentalist rabbis’ refusal to grant any credence to the rich and incontrovertible findings of academic biblical scholarship that brought the ire of British Orthodoxy to bear on Louis Jacobs, who insisted on taking up the challenge of this scholarship. This led to the notorious “Jacobs Affair.” In that connection, the absence of any references in Sacks’s book to the vast work and rich thought of modern non-Orthodox rabbis and theologians is terribly disappointing.

Sacks devotes a very lengthy chapter to argue that the basics of Darwinian evolutionary theory, and the findings of geo-physics that show the world to be many millions, not 6,000, years old are not at odds with a nonliteral reading of the creation narrative in Genesis. There is something illusory and anachronistic about Sacks’s elaborate “compromise” with modern science, since it had long ago been made by his distant predecessor, Chief Rabbi Joseph Hertz, and has been commonplace among Modern Orthodox Jews for many decades. Hertz, who died in 1946, is best known for his edition of the Chumash. A staple of Hertz’s commentary to the Chumash is his relentless polemics against the methods and findings of modern biblical scholarship. Following in these less enlightened of Hertz’s footsteps, Sacks eludes completely the challenges of modern biblical scholarship, even demeaning its manner of reading the Torah as unimaginative and inferior to the poetic approach of traditional Midrash toward resolving Scriptures’ inner contradictions.

Jacobs observed, in the summation of his theology, published a year before his passing, “Beyond Reasonable Doubt”: “The “Modern Orthodox” seem to be saying that you can be a devout Jew even if you read Shakespeare or Kant or Wittgenstein, or if you enjoy classical or modern music or have an appreciation of Picasso…. Fair enough. But what of history, especially biblical and rabbinic history the result of studying which is to call into question some of the postulates of the religion itself?

These words resonated as I worked my way through Sacks’s tome. “The Great Partnership” is the fullest, most intimate and moving expression of the personal faith of Jonathan Sacks. Alas, the book proves his to be the faith of a rather uncompromising Orthodox theologian who offers no serious criticism of Jewish fundamentalism and who shows neither any interest in, or real respect for, the many non-Orthodox theologies of contemporary Judaism. It would perhaps have been wiser for Britain’s outgoing chief rabbi to have set his sights a bit lower, namely toward cultivating harmony within his own fractured community, before endeavoring to achieve a great universal partnership between science and religion.