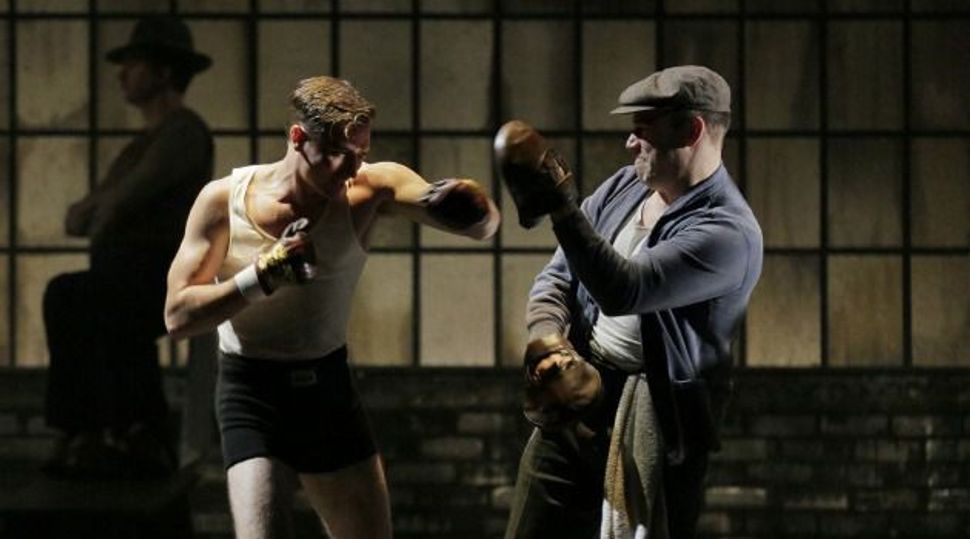 When boxer Joe Bonaparte (Seth Numrich) realizes his hand is shattered following a brutal match, he howls in pain, despair and also triumphant joy. It’s a stunningly powerful — and complex — moment in “Golden Boy,” now playing on Broadway at the Belasco Theatre, 75 years after a Group Theatre production of the Clifford Odets play premiered. The broken hand symbolizes Joe’s battle for liberation from his father’s values, and his own anguished ambivalence about a career in the ring versus playing the violin, his lifelong passion. But the culture does not value its artists, and, if nothing else, Joe is ambitious. With his destroyed hand he is now wholly free to follow a path that will bring money and fame, explained veteran director Bartlett Sher, who previously helmed Odets’s “Awake and Sing.”

Sher, who won a Tony for his rousing Lincoln Center Theater production of Rodgers’s and Hammerstein’s “South Pacific,” spoke with the Forward’s Simi Horwitz about the many conundrums in “Golden Boy” that Odets faced.

“He had moved to L.A. and was making $5,000 a week in 1936 and ’37. He came back to write this play because Harold Clurman begged him to,” Sher said. “He was already in the middle of wondering who he was. So, it’s interesting that he created this scenario between the violence of the boxer, who can destroy humanity with his fists or serve humanity as a musician. It’s an interesting metaphor.”

Simi Horwitz: Don’t you think there are authentic artists who are financially successful?

Bartlett Sher: Yes, but it’s a constant problem of management, especially if you’ve achieved some success. How do you hold on to your core values while addressing all of the pressures and anxieties that come with success? You may not even know you’ve stopped asking the question. You may just start making safer choices. When we were growing up, people said, ‘Oh, you’ve sold out.’ We don’t talk about that anymore. We see glee when someone reaches the top. That’s when people used to say, ‘You’ve sold out.’

What are the challenges in staging Odets in general and “Golden Boy” in particular?

Getting inside the truthfulness of the situation while making sense of the language, which is heightened and poetic. That’s a constant struggle with Odets. “Golden Boy” was especially difficult because it’s a sweeping story with eight different locations, a wide range of characters, and three or four plots. It’s not unlike directing Shakespeare.

Did you edit the play in order to make it more resonant for a contemporary audience?

I didn’t cut anything, but we restored a couple of things that Odets had removed from the play. Instead of Mr. Bonaparte speaking in an Italian accent, we had him speaking in Italian at certain points. In that household he would have spoken English mixed with Italian.

Though Tony Shalhoub does an impressive job in mitigating Mr. Bonaparte’s clichés, the character is nonetheless an ethnic stereotype. How do you address that as a director?

The base of all stereotypes is truth. You just have to keep on digging to get at the truth in a new way. Odets was very much a Jewish writer; it’s hard to separate him from the Jewish patois and sensibility. If there is a problem with “Golden Boy,” it’s his trying to write for an Italian. I’m never quite sure why Odets made it a Lower East Side [of Manhattan] Italian family as opposed to a Jewish family.

He may have thought he could sell it to the public more easily if the protagonists were Italian.

He wrote it for Morris Carnovsky and Luther Adler, not Ben Gazzara. I think it had to do with Bonaparte’s love of opera, and somehow for Odets that meant the family was Italian. Italy is the land of great art and culture. It was an idealization.

You have an interesting background.

I was one of six kids raised as a Catholic in San Francisco. But my father was a Lithuanian Jew born in the shtetl. He moved with my grandparents to San Pedro, Calif., where my grandfather worked on the docks and then as a barber. When my father grew up, he went to Stanford and felt that the best way for him to succeed in business was to deny his Jewish heritage. He was an insurance salesman. My mother did not know he was Jewish when she met him, and I did not find out until I was 14 and my parents were divorced. That’s when my mother told me. I was thrilled. I thought it was cool. I was fascinated by my father’s background.

Your paternal grandparents went along with this deception?

My grandfather died when I was very young, and my grandmother — a fascinating Polish-born woman who could speak five languages but read or write none — lived in Southern California, and we lived in Northern California. She was a practicing Jew and a supporter of Israel, but we knew nothing about it. My father insisted we not know, and she did anything he told her. My cousins, children of my grandparents’ two daughters, were also not raised as Jews. My aunts did not want their children to know they were Jewish, either.

How do you define yourself today?

I tell people I’m Jewish but brought up as a Catholic. I went to Holy Cross, a Jesuit college in Worcester, Mass., and taught in a Jesuit high school. I don’t practice anything. My wife is not Jewish, and our kids go to the Unitarian Church. We want them to be exposed to all faiths, but I wouldn’t feel comfortable raising them in a Jewish household. I don’t have that subconscious connection to the religion, though I do have that connection with the culture, and my artistic skill comes from being Jewish. But it also comes from being Catholic.

My greatest artistic influence is the great Polish avant-garde theater artist Tadeusz Kantor. He was half Jewish and half Catholic, and I am most connected to that aesthetic tension. I don’t think you have this Catholic side or Jewish side if you’re an artist, but I suppose my Catholic background has made me aware of certain references in the language, while a Jewish tradition helps me feel copacetic with Rodgers and Hammerstein, whose politics are within their aesthetics. In some ways, we operate subversively within the culture. My Jewish background has also helped me with Odets — his emotions, spirit, intelligence, humor and the rhythms of his language.