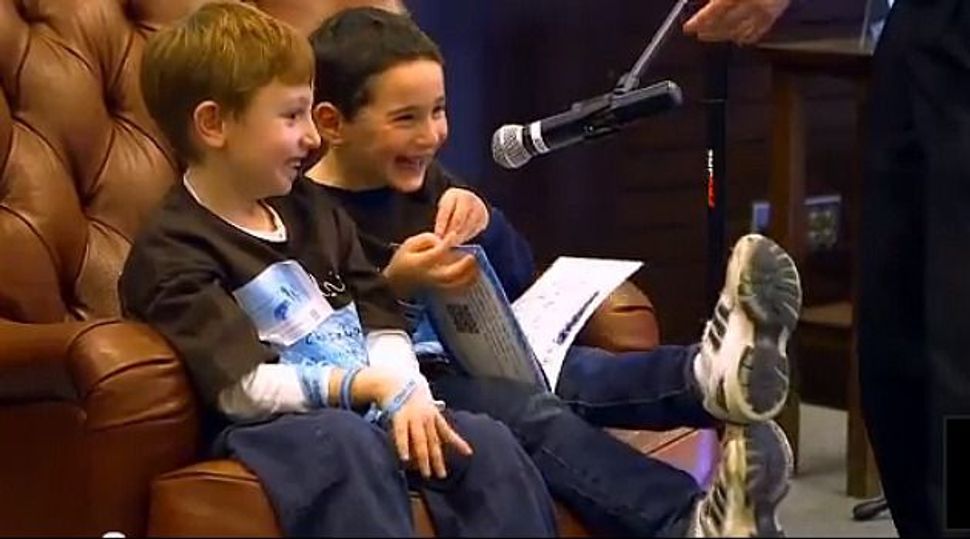 Author With a Cause: Dylan Siegel, left, wanted to raise money for a cure when he found out his friend Jonah Pournazarian had a rare genetic disease. So he wrote a book. Image by youtube

Like a lot of kids his age, 6-year-old Dylan Siegel loves coming up with stories. But unlike most kids, he has a best friend with a rare genetic disease. So when Dylan wanted to raise money for a cure for Jonah Pournazarian, 7, who suffers from Glycogen Storage Disease, he decided to do it in a creative way.

“I suggested that he set up a lemonade stand,” his mother Debra Siegel, of Beverly Hills, told the Jewish Journal. “But he said he wanted to write a book.”

Dylan finished writing and illustrating the pages of “Chocolate Bar” the next day and urged his parents to help him publish the book, the paper reported.

Glycogen Storage Disease is a metabolic disorder that requires doses of cornstarch to be administered around the clock through a feeding tube. Jonah has an extremely rare form of the disease, type 1B, which has not been widely studied.

With support from the fund Jonah’s parents created, Dr. David A. Weinstein of the University of Florida is searching for a cure.

In two months, sales of the book — along with actual chocolate bars donated by Whole Foods — have raised more than $25,000 for the fund, according to the Chocolate Bar website. Dylan hopes to eventually raise $1 million.

Dylan and Jonah sold copies at the Stephen S. Wise Temple Mitzvah Day in November and a December appearance at Barnes and Noble.

“I laugh because it’s just so cute that a six-year-old had a book signing,” Jonah’s dad, Rabin Pournazarian, told the Beverly Hills Weekly.