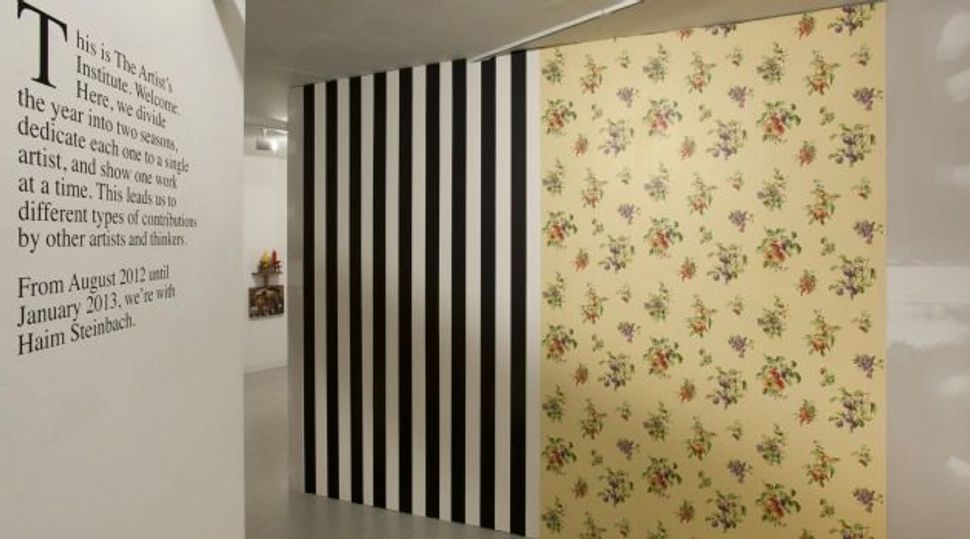 One of the seminal stories in the history of art is that of Marcel Duchamp, a French artist who, in 1913, took a bicycle wheel, mounted it on a stool, and called it art. “Readymades” was the term Duchamp later coined for the everyday objects — bottle racks, shovels, even urinals — that he would find, sometimes alter or reposition, sign, and display. The implications of his actions were huge: Art did not require the artist to physically create something, and accordingly, just about anything could be art.

Haim Steinbach, 68, is the subject of a series of exhibitions running through the current season at Hunter College’s Artist’s Institute, on Manhattan’s Lower East Side. He works with everyday objects: stuffed animals, dog chew toys, shoes, children’s toys, cereal boxes, dishes. He selects objects, builds shelves on which to display them and arranges them in mysterious yet resonant groupings, often involving repetition — two pairs of sneakers accompany a deer-themed lamp; two circular door mats and two “Caution” floor signs are lined up with a dog chew toy; five dog chew toys sit alongside a plastic mini cauldron and a metal-and-wood cart core. Steinbach has been building these displays since the late 1970s. Before that, he was making paintings, but as early as 1970 he was gradually moving away from the illusionistic space of the canvas toward what he calls “the object question.”

“I’m at the cusp of moving into doing something like that,” he recalled on a recent afternoon at his home and studio in the Greenpoint section of Brooklyn, placing himself back in his own 1970s mindset. “But what allows me to do something like that is that I remember that Duchamp took the bicycle wheel and he stuck it on a shelf. Now, a bicycle wheel wouldn’t necessarily be put on a shelf; it wouldn’t be stuck upside-down. This is something else. But I say: ‘Well, what if you just take the stool, you take away the bicycle wheel and put a cup of coffee on it, you know? Why wouldn’t that be art? It’s the next logical move, no? Somebody had a cup of coffee, they were in the studio, they put it down on the stool and there it is! Lo and behold, that’s a work of art!’”

“What is an object?” he mused. “How do we apprehend an object? How do we live with an object in the same space, and which space does it belong to? How do we relate to it depending on the space in which it’s being put, the context?”

“‘Everyday objects’ could include a work of art. I mean, if I had a Brancusi to put on the shelf, I would put it,” he explained. “Art is everywhere. Art is in the eye of the beholder. You can look at that piece of rock or something, and you can have a moment of ecstasy — an artistic, sublime experience that’s as big as looking at a painting.”

For Steinbach, who seems at least a decade younger than his age and has a focused and sometimes intense energy, this idea to recast the mundane objects of our lives grew out of his education as an artist and the way that education dovetailed with the world around him.

At the time, the rise of minimalism had people rethinking what an art object should be; Steinbach brought that question home, quite literally, to his parents’ kitchen, where he began to notice a shelf filled with tchotchkes in a new light and to wonder what the pieces on it meant and what they were saying.

This wasn’t the family’s first kitchen; the Steinbachs moved to New York City from Rehovot, Israel, when Haim was 13, landing on the 13th floor of an apartment building in the Bronx. Five years later, his parents moved to the Bayside section of Queens, while he attended Pratt Institute, in Brooklyn. Two years after that, he took off for Europe, spending a year in Aix-en-Provence before returning to finish his undergraduate degree.

By the time Steinbach had his revelation, his parents were living in upstate New York, and he had been in the United States for nearly 20 years. Yet in a certain light, his artistic approach harkens back to his younger self — an immigrant encountering a strange, new culture and, not knowing its rules or hierarchies, processing it as best he can. (Steinbach left Israel when it was still a fledgling state, far less similar to the United States than it is today.)

“I think that Haim interrupts on the shelf what our first reading of an object might be, and he allows us to look at that thing in all its strangeness,” said Jenny Jaskey, curator of Steinbach’s current season at the Artist’s Institute. “That’s analogous to going to a culture for the first time and being able to see things without being able to read them.”

After Pratt, Steinbach held a series of teaching jobs before he was accepted to Yale University’s Master of Fine Arts program in 1971. When he finished there, rather than follow many of his colleagues to New York to break onto the art scene, he went and taught in Vermont, at Middlebury College. He has continued teaching — which he calls “a very good exercise in thinking” — in some form ever since, and credits it with helping him develop quickly as an artist.

“While [my peers] kind of settled into the mode of ideas and work of that period, I was just traveling through periods and ideas through my teaching. It’s almost like I digested a certain set of ideas that I had to work through, and I could move on to the next thing.”

Steinbach finally got his big chance in 1979, when he was given a solo exhibition at Artists Space, an alternative, not-for-profit gallery in SoHo that helped shape the Downtown art scene of the time. At that breakthrough show, he was already exhibiting object displays. In essence, he showed up in the art world fully formed.

“Doing that show basically meant, on the one hand, putting a foot through the door, or recognition for something that I suppose was pretty radical, and at the same time knowing that I cannot make a living on this kind of work,” he said. “Conceptually and practically, I hit a brick wall, but I had nowhere else to go. It makes me think of Sartre’s play ‘No Exit.’ I had no exit.”

In the decades that followed, Steinbach achieved a fair measure of recognition and success. But he also struggled, especially when compared with someone like Jeff Koons, who surfaced in the art world around the same time and quickly became a superstar. Despite vast differences in tone and presentation, Steinbach’s work was lumped together with Koons’s simply because both men used everyday objects in their art. Critics labeled it “commodity critique” and moved on.

As the years passed, the art world gradually came around to the idea of objects and object display. The Museum of Modern Art, for instance, began a series called “Artist’s Choice” in 1989, for which the institution invites artists to dig through its collection and curate an exhibition; the results usually involve groupings of disparate objects and a breaking down of traditional categorical hierarchies, concepts that underpin Steinbach’s practice.

It’s been a slow process, though, and sometimes it seems like the art world is only just catching up to him now. He’s suffered a lack of recognition along the way — “This is just an old story repeated again,” he said — but happily, something like a Steinbach revival seems afoot. In fall 2011 he had his first exhibition at Tanya Bonakdar Gallery, garnering strong reviews; in the fall of 2012 and part of this winter, he has been in the spotlight at the Artist’s Institute and this coming summer he will be featured in a solo exhibition at Bard College.

It could be that, more than ever before, the art world is letting go of the paradigm of art as a standalone illusion and embracing the intrusion of everyday life. It could be that we live in a post-commodity world, where we accept that objects have both commercial and cultural values. It could be that after years of teaching, Steinbach’s influence is finally coming through in the work of younger artists, many of whom may have been his students. Jaskey sees a parallel between Steinbach’s process of bringing together disparate objects and the Google Image search/Tumblr/Pinterest culture of today.

“I think this is a really strong relationship to younger artists, even our generation’s culture, the Internet, because that’s all about association,” she said. “One reading of [Steinbach’s work] is, it’s about a finding and a presenting,” which resonates with today’s remix culture because it involves “showing other people what we found. The meaning is not in what we made, but in what we put together.”

Jillian Steinhauer is a senior editor of the art blog Hyperallergic and a freelance writer living in Brooklyn.