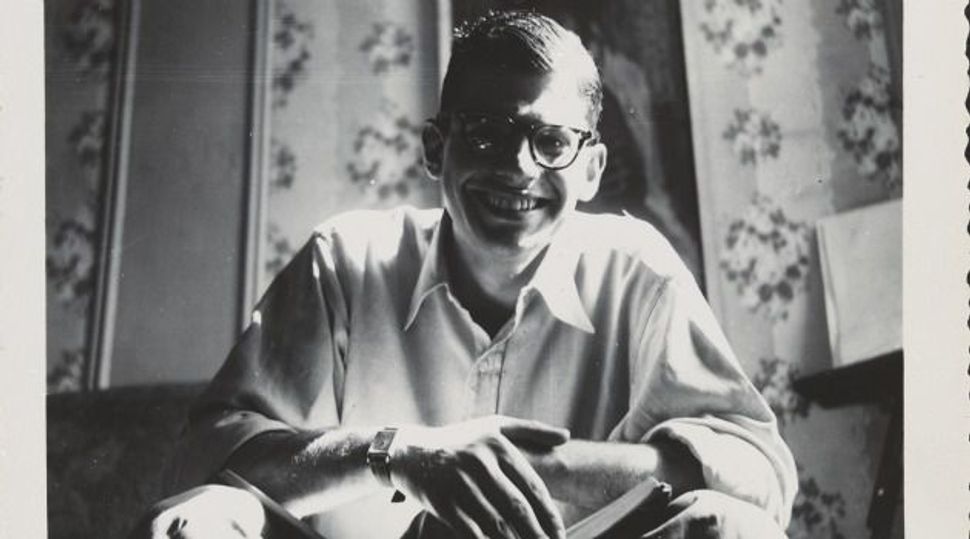 All photos: © 2012 The Allen Ginsberg LLC. All rights reserved.

Somewhere, there is a snapshot of Allen Ginsberg and me sitting next to each other on a sofa — capturing us both in a rare moment of clean-shavenness — taken in 1981, when the poet visited Williams College for a reading. I don’t recall who took the photo, although I’m pretty sure it was snapped at a brunch hosted by a religion professor named Nathan Katz, who knew Ginsberg and brought him to Williams.

At the time, Ginsberg’s visit was seen as something transgressive on the campus of this elite, private New England institution founded in 1793. Katz was an immensely popular professor among a large minority of students, and probably as a result of his popularity — and maybe because he brought the world’s most famous gay Jewish poet to campus — he was denied tenure in the otherwise Judenrein religion department later that year.

Katz, who was actually hired as a specialist in Eastern religions and went on to be profiled in Rodger Kamenetz’s memoir of a Jewish delegation’s visit to the Dalai Lama, “The Jew in the Lotus,” probably hadn’t helped his cause by also bringing such Jewish rebels as Arthur Waskow and Reb Zalman Schachter-Shalomi to campus, as well as leading the campaign for a Jewish studies concentration, a struggle finally won about a decade after his — and my — departure from Williams in 1982.

All this — as well as the 90-minute car ride from the Albany airport, where I fetched Ginsberg for Katz in my 1976 Chevy Chevette and brought him back to Williamstown, Mass. — came back to me as I walked through “Beat Memories: The Photographs of Allen Ginsberg,” at New York University’s Grey Art Gallery.

The show, on display through April 6 before traveling to the Contemporary Jewish Museum, in San Francisco, where it will be on view from May 23 to September 9, consists of casual snapshots and more considered photographs taken by Ginsberg, mostly of his friends and himself, before 1963 and in the late-1980s and ’90s. (Ginsberg died in 1997.) Given the makeup of Ginsberg’s peer group, which included William Burroughs, Jack Kerouac, Neal Cassady, Gregory Corso, Peter Orlovsky and others, the exhibit — which also includes typescripts, handwritten poems, first editions, notes and letters — winds up documenting the birthing of the Beat movement and, by extension, that thing we refer to as “the ‘60s.”

The exhibition, curated by Sarah Greenough at the National Gallery of Art and featuring more than 110 black-and-white photographs, has been faulted elsewhere for what it lacks: any representation of the cultural ferment of the ‘60s, to which Ginsberg often had a front-row seat when he wasn’t actually one of the actors onstage. Through waning interest, preoccupation with other pursuits (poetry and politics, primarily) and, apparently, a penchant for losing cameras, Ginsberg stopped taking photos in 1963 and didn’t resume doing so until the 1980s. But we have been oversaturated with images of that era, so to fault the show for what it lacks is really beside the point.

Instead, especially in his earliest photographs, what Ginsberg offers in his pictures (a few taken by friends to whom he handed the camera) is a behind-the-scenes view of the gestation and hatching of this era through intimate glimpses of so many of its key figures and influencers. Thus, half a decade before he became famous as the icon of the Beat generation, we see a proud, strutting, athletic, self-confident Kerouac, fancied by Ginsberg and himself as a movie icon. We see a suspicious, brooding Burroughs (whom Ginsberg had just visited when I picked him up at the airport, and who still apparently had a great hold on Ginsberg’s imagination, as he was spouting Burroughs’s nonsensical ravings about Israel’s bombing of the Iraqi nuclear reactor as having dangerously triggered the onset of a war of “Gog vs. Magog”), seemingly challenging Ginsberg’s lens to a staring contest.

What’s remarkable about so many of these early snapshots, presumably taken informally and somewhat off the cuff, is how self-aware both the photographer and the subjects were. Ginsberg had had no formal photography training. But as early as 1955, he shows at least an organic understanding of how to compose a shot: A portrait of Orlovsky at the shore is a textbook demonstration of Photography 101’s “rule of thirds.”

Some of these shots, were they of your friends or relatives or of mine, would merely be family-album material. In Ginsberg’s case, his family members were nothing less than cultural revolutionaries — and media-savvy ones to boot. A number of images show the influence of cinema, including a pose wherein Cassady and a girlfriend embrace beneath a movie marquee. Kerouac, captured in New York City, posing like the original Beat hipster he was, clearly modeled himself after Brando. A shot of Burroughs naked but for boxers in bed looks like a movie still: The focal point is the tufted bedspread and his left knee in the foreground; his torso and head and the pillow are gauzy, out of focus, adding to the post-coital mood that the pose suggests.The exhibit is full of moments like these, which ask the question: Can intimacy and exhibitionism coexist?

While the exhibition’s strongest point is its window into the early camaraderie of the Beats — with a strong, homoerotic undercurrent, including plenty of bare midriffs and several full-length naked portraits of Ginsberg and friends — it is bookended by Ginsberg’s (presumably unintended) portrayal of the dissipation of that life and world, beginning with a portrait of a disheveled, stoned and broken Kerouac in 1964. He is hardly recognizable as the same athletic hunk in a swimsuit on a beach in Tangier, Morocco, in 1957. Later, the incipient mortality of Ginsberg’s generation is underscored by a series of shots of the elderly Burroughs and Corso, of an aging Bob Dylan, and of Ginsberg himself.

The Dylan portrait is cute; it captures his longtime friend — who immortalized the poet in the “Basement Tapes”-era parody, “See You Later, Allen Ginsberg,” recorded with the Band a few years after Ginsberg appeared in the proto-music video for Dylan’s song “Subterranean Homesick Blues” — wearing a leather jacket like a cape in Tompkins Square Park. Ginsberg writes in a caption for the photo that the two of them were chased away by a group of homeless men throwing bottles, mistakenly assuming that they were taking pictures of them. I like to think that maybe they thought these two scraggly old Jews were homeless men like themselves, homing in on their territory.

On that car ride to Williamstown from Albany, Ginsberg referred to himself as “a Jew who pays lip service to Buddhism,” a striking confession at the time for the original JuBu. Equally striking is Ginsberg’s portrait of his paternal grandmother, Rebecca “Buba” Ginsberg. He frames this Russia-born socialist in front of a window in an otherwise sparsely populated image, shirt buttoned up to her collar, cardigan over her shirt, with a meager plate of food placed in front of her, grimacing like some crusty Midwestern farmer’s wife — the very picture of “immigrant gothic.” It’s hard to believe that the occasion for the shot is a Passover Seder. It’s even hard to believe that this woman is Jewish. Ginsberg himself would wrestle with that legacy his whole life, which, of course, is the most traditional thing for a Jew to do.