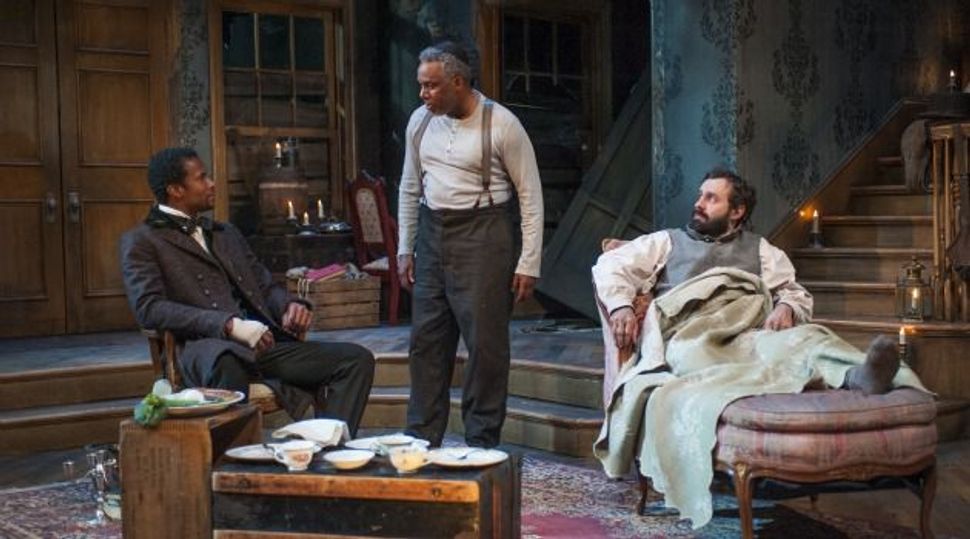 The Whips And Scorns Of Time: Judaism, slavery and exodus are hotly debated in Matthew Lopez?s play ?The Whipping Man,? seen here in a production at Northlight Theatre in Skokie, Ill. Image by Photo by Michael Brosilow

Recently there has been a spate of films, articles and plays about the Civil War and slavery, including “Lincoln” by Steven Spielberg and Quentin Tarantino’s “Django Unchained.” Few of these have mentioned Jews, and appropriately so since the numbers of Jews who owned slaves in the United States was relatively small. Nevertheless, the play “The Whipping Man,” which takes place at the end of the Civil War and concerns a Jewish slave owner and his newly freed slaves who also practice Judaism, has found a niche on the theater circuit.

Written by Matthew Lopez — a gay, Episcopalian-born son of a Puerto Rican father and a Polish-Russian mother — the play won the 2011 John Gassner New Play Award from the New York Outer Critics Circle. It has been performed throughout the country at African-American focused theaters, such as Penumbra in Minneapolis, and Jewish focused theatres such as Theater J in Washington, D.C. and the Jewish Ensemble Theatre outside Detroit. It just completed a run at the Actors Theatre of Louisville and is currently playing at the Northlight Theatre outside Chicago.

“Matthew’s play is where history ends and life begins,” says Meredith McDonough, director of the Louisville production. “Set in the background of an enormous moment in history is a very human story of what freedom means to [a] family.”

The play opens with Confederate soldier Caleb DeLeon returning to his Richmond home after the surrender of the Confederacy to the Union at nearby Appomattox in April of 1865. Severely wounded, Caleb is greeted by Simon, his former slave. Caleb’s leg is gangrenous and needs to be amputated immediately. In order to save his life, Simon and John, another former slave, get Caleb to submit to excruciatingly painful surgery, with only whiskey as anesthesia. As Caleb recovers, they realize that Passover is upon them. Simon, raised in the Judaism of the household, demands they observe a Seder and celebrate the festival of freedom from enslavement.

Did enslaved African-Americans who were Jewish exist? According to Jonathan Sarna, author of “American Judaism: A History” and a professor of Jewish History at Brandeis, there were Jewish slave owners, but “they were very small in number and few Southern Jews had the wealth to own plantations with slaves. A great many Jews in the South certainly owned house slaves; that was the Southern way… and as the play shows, there were black slaves who took on Jewish observance and attended synagogue.”

“It was this eureka moment,” Lopez said of the idea of slaves being freed on Passover. “As these slaves were being freed in the American South, there was this ancient observance of the Exodus story. There must have been something very tantalizing for the slave, hearing the words of the Haggadah every year at Passover….There is something within Judaism, within the practice of Passover itself, to my imaginative mind, that would be quite appealing to slaves.”

Lopez considers his play to be a sort of contemporary Midrash — a blend of interpretive story and questioning, that he believes is inherent to Judaism. Have we as a nation truly moved to the other side of racism and prejudice, the play asks. And ultimately does America truly accept the “other” in its midst?

Lopez began his research not long after the destruction of the World Trade Towers. “Certainly the pain of 9/11 was still fresh at the time and it made its way into the atmosphere of destruction in the play,” he said. “I would say the play was written as a reaction both to the attacks and to the feelings I had about the war — the needless destruction and waste.”

But Lopez does not wish his play to be tied to one distant historical moment or to the more recent moment that inspired it. Rather, he sees it as a universal story of exodus, relevant to many freedom struggles.

“About a year and a half ago my partner was in Africa and I was out with friends and we came out of a theater in Times Square and there was the news that the New York State Legislature had passed the marriage equality law and we hugged and started to cry,” said Lopez. “I felt validated, like a real citizen, like I was given something that had been missing — a feeling of completeness. I instantly thought about John and Simon in the play. Simon never thought that he would be free. But John knew about abolition and he saw the Civil War coming. John was born feeling that he had worth and value. I saw it affect people night after night in the theater. Theater can do this — it has the power. It can validate.”

David Chack teaches about Holocaust Theater and Jewish culture at the Theatre School of DePaul University in Chicago, IL.