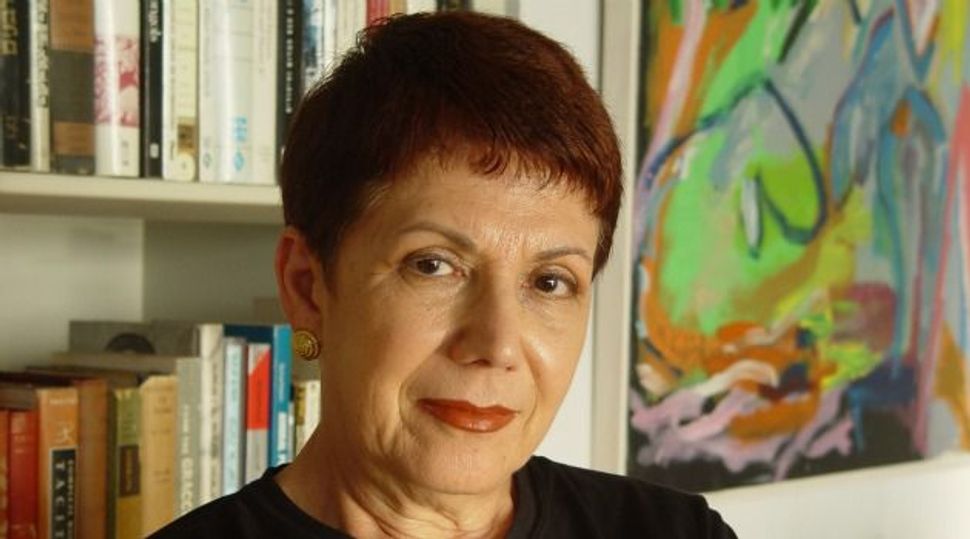 Our Historian: Anita Shapira won a 2012 National Jewish Book Award for her comprehensive narrative of the history of Israel. Image by Omri Shapira

Everyone wants to write a “history of Israel” — and many good, and some not so good, historians have done so. Martin Gilbert’s “Israel: A History” (not to be confused with the book we are reviewing here) is excellent for the beginner in the field; Netanel Lorch’s brief but insightful “One Long War” uses the unending Arab-Israeli military conflict as a vehicle for offering a readable history; Martin van Creveld’s “The Land of Blood and Honey” is quirky and insightful.

And for context — “How did we get to this place?” — David Fromkin’s “A Peace To End All Peace” is the account nonpareil of the beginnings of the modern Middle East. And, lest we forget, the blockbuster “Exodus,” which for many American Jews was the introduction to the history of Zionism and the Jewish state. More’s the pity.

Anita Shapira ups the ante in her history, which recently won a 2012 National Jewish Book Award, offering a truly comprehensive narrative of Israel, from its genesis in the first stirrings of Zionism in the 19th century to present day’s unsettled Israeli society. Shapira is a historian who believes things actually happened in history and they deserve a good telling. But the author, who has had a distinguished academic career, is a superb analyst, as well.

In “Israel: A History,” the “Why?” and “How?” of Zionism and Israel beautifully complement the “What?” She is a forthright centrist in her historiography, paralleling in many ways the views of Mapai/Labor, the regnant political institution for many decades in the Yishuv, the Jewish community in Palestine under the British Mandate and in the State of Israel.

Shapira’s opening chapter, on Herzl and the evolution of Zionism, is by itself worth the price of admission. The Herzl story is not just the enduring myth — the “Herzl-was-appalled-by-L’affaire-Dreyfus” version of the origins of Zionism — but also a far more nuanced analysis. Indeed, this chapter points the reader in the direction of the flow of the book: a skillful interweaving of narrative history, engagingly told, and analysis.

A splendid example of Shapira’s writing of history is her chapter on the Six Day War, a tour-de-force of 12 exceptionally concentrated pages in which the antecedents to the conflict are clearly explained. And the war story itself is told grippingly. But that’s not all the chapter manages to accomplish. In my reading of Shapira’s moving account, I relived the anxiety of the weeks leading up to the conflict, a period in which few Jews were not aware that the survival of Israel and perhaps the Jewish enterprise was at stake.

This is not to say that “Israel: A History” is without flaws. There are curious omissions. Arthur Ruppin, largely forgotten today except for some street names in Israeli cities, was more than just another early Zionist leader, as one would think from reading Shapira’s book.

Ruppin was the visionary who was the first to articulate the need for a majority of Jews in Eretz Yisrael; was the first to insist that land purchase was crucial to the survival of the Yishuv in Palestine — a “no-brainer” later, but radical when it was first asserted by Ruppin, and was the pre-eminent architect (together with Berl Katznelson) of the socialist-agricultural model that became known as the kibbutz. But Ruppin merits all of one short paragraph in “Israel: A History.” He deserves more, and better.

As does early Zionist leader A.D. Gordon, the spiritual mentor of Labor Zionism, who merits a scant one sentence. And Shapira’s discussion of the post Six Day War “settler movement” has it that it was all about the Mizrachi-generated Gush Emunim, “Greater Israel” activists who came out of the Religious Zionist community.

In fact, the “settler movement” was generated in 1967, right after the Six Day War, by territorial-maximalist Ahdut Ha’avoda; Gush Emunim did not get off the ground until the early 1970s.

These and other omissions and errors are hardly quibbles. More important, however, is Shapira’s account of the genesis of the all-important Palmach — “Plugot Machatz,” the military striking force of the Yishuv — which is of a piece with her discussion of British-Jewish cooperation in the late 1930s to early ’40s. According to Shapira, the Palmach was organized to work with the British in intelligence gathering and in sabotage of Arab installations. Entirely accurate, as far as it goes.

But Shapira’s account — just one sentence long — of a key Yishuv institution misses the point. The Palmach was not just a function of the Haganah; it came out of deep ideological struggles within the Yishuv between the regnant socialist Mapai party, which generated the Haganah, and kibbutzim of the territorial-maximalist socialist Ahdut Ha’avoda and the far-left Hashomer Hatzair.

The Palmach was in effect an ideological military countermove to Mapai’s Haganah, even as it was technically part of the Haganah and many “Mapainiks” served in the Palmach.This point is more than mere nuance; it tells us that the Jewish community in Palestine was all about ideology and “movement,” and that the institutions of the Yishuv were informed by struggles over ideology.

Indeed, crucial to any telling is that the history of Zionism and the Yishuv was a reflection of European 19th-century Jewish history: It was all about ideology, and here Shapira is spot-on. Mapai’s left-of-center socialism, Ahdut Ha’avoda’s territorial-maximalist socialism, Hashomer Hatzair/Mapam’s radical socialism, Mizrachi’s moderate Religious Zionism, Agudat Yisrael’s aggressive religious stance, the rightist Zionist-Revisionist Herut (later Gahal, now morphed into the Likud) — it’s all there in Shapira’s narrative.

And this is what’s best about “Israel: A History”: Here, we finally have a history that enables the reader to make sense of the arcana of the political and social ideology of the Yishuv, and then of the state. How did Mapai come to be? Ahdut Ha’avoda? Hashomer Hatzair? Without an understanding of the genesis of these parties, it’s impossible to make sense of how the Yishuv developed and how the state itself came to be.

To be sure, Shapira could be a bit clearer on Mizrachi/the National Religious Party, and she is not sure-footed when it comes to Agudat Yisrael and the historically important left-wing voice of Agudah, Poalei Agudat Yisrael. But the few paragraphs on Hashomer Hatzair are a model of how social and political history ought to be written, and they illumine the larger story of the Yishuv.

Along similar lines, Shapira walks the reader through the five waves of immigration to Palestine — the “Aliyot” — again, crucial to the understanding of the political, social and religious development of the Yishuv. From the First, in the 1880s, through the Fifth, in the 1930s, the Aliyot have puzzled many a student. We have, at long last, a fine road map to the politics, ideology and social history of the developing Yishuv.

A chapter that has a lot of trees but in which the forest is clearly discerned is the one in which Shapira retells the story of Milchemet Tashach — the 1947–49 War of Independence. The reasons for Israel’s victory were, as Shapira reports, more than the standard narrative of heroic Jews protecting a beleaguered new nation, overcoming with indomitable spirit venal Arab nations intent on carving up the new state.

This version, which is celebrated by “Exodus” and has limited merit, ignores crucial dynamics: the lack of unified Arab war aims; the closing of the ordnance gap between Israel and the Arab states, especially after the first truce, in June 1948 (fighting resumed on July 9, not on Shapira’s June 9), and — curiously missing in Shapira’s analysis — the role played by the Yishuv’s superior agricultural technology and distribution system.

The point: After the first month of fighting in mid-1948, these factors enabled the newly constituted Israel Defense Forces to gain the upper hand while Palestinian Arab society was disintegrating. Shapira’s narrative is insightful in its analysis and gripping in its telling.

And there is culture, the interstitial tissue of political history. Shapira’s discussions of literary trends — from the early literature of the Yishuv through the Dor Ha-Palmach, the “Palmach Generation,” of the 1950s and ’60s, through the 1980s fear of chaos, to the return to family, community and nation that characterizes current Israeli fiction — neatly contextualizes larger questions facing Israel.

At bottom, “Israel: A History” is for everybody: scholar, student, and general reader. The book will be most valuable to those readers who already know something, and some scholars will yearn for more comprehensive annotation. But Shapira has done something that most surveys do not accomplish: Shapira’s “How?” and “Why?” put us right there, in the historical moment, and answer for us not only “How?” and “Why?” but also, “What was it like?”

Jerome A. Chanes, a Forward contributing editor, is the author of four books. He is a senior fellow at the Center for Jewish Studies of the CUNY Graduate Center.