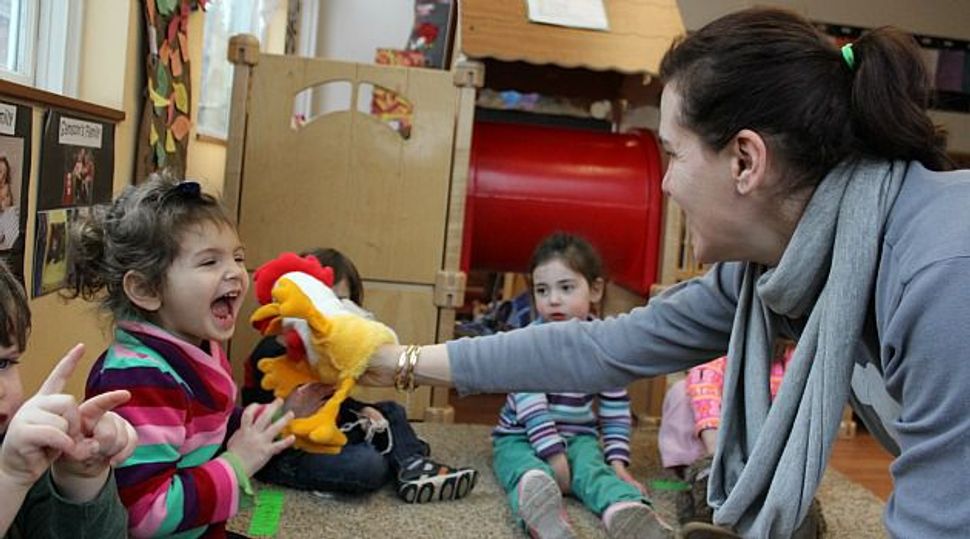 In our Brooklyn neighborhood, it’s said you should put your kid on a waiting list for child care while she is still in the amniotic sac. And when it comes to preschool, don’t hold your breath — unless, that is, you’ve got good connections. When it was our turn, I attended workshops on applying to preschool, toured half a dozen schools and subjected my daughter to interviews masked as “play dates” with the current students.

While I never went inside the local Chabad preschool, I did peer through the window. It looked cute, but as somebody who was raised attending a Reform synagogue, I had a hard time getting past my own preconceived notions — namely that the walls would be covered in photos of the rebbe and that my daughter would come home insisting on wearing long skirts.

Recently, however, I have learned that many of my nonreligious friends are turning to Chabad for preschool. And not just in New York.

Chabad operates 1,000 preschools worldwide, including 300 in Israel and 400 in the United States. In 2010, Chabad launched a special early childhood initiative called The Machne Israel David and Lara Slager Early Childhood Initiative. In the past two and half years, this fund helped in the creation of 45 new preschools (most in North America, and two each in Argentina, South Africa and Australia). There are plans to create another 100 over the next four years.

For the most part, the schools are intended to attract secular parents like Anna Sandler. She was living on the Upper West Side of Manhattan when it was time to send her eldest child to preschool. Competition was so fierce that when she called around to the local preschools and apologized for missing the deadline, the representatives simply laughed in her face.

That’s when a friend suggested she check out the Chabad Early Learning Center, located on the Upper West Side.

“From the very beginning it was such a lovely experience,” said Sandler, who runs a social media company and identifies as nonobservant. Though the schools aren’t free, parents said the tuition is usually comparable to other local preschools. Her child was accepted into the school, and Sandler said she never felt judged.

For the unfamiliar, Chabad is a Hasidic group headquartered in the Crown Heights section of Brooklyn. Its adherents believe, among other things, that secular Jews ought to become more observant.

“They were not pushy, but they were clear about their outreach,” Sandler said about the teachers and director at the school. Over the years, she has been invited to weddings in Crown Heights and to a number of Sabbath meals. Sandler still isn’t a member of a synagogue, but she attends services at a Chabad House on holidays.

Mostly she just found the school to be warm and inviting (a feeling echoed by a number of parents I interviewed). She eventually sent all three of her children to Chabad preschools. Her youngest son attends a school in Maplewood, N.J., where the family now lives.

Even five years later, her children still recall the Jewish education they received.

“When my kids see somebody doing something nice even today, they say ‘Now the mashiach [Messiah] is taking one step closer,’ which I think is cute. I never correct them, because I think more good in the world is good.”

Some parents, on the other hand, might be freaked out if their child suddenly referred to the Messiah’s imminent arrival. The schools, it should be said, for all their egalitarian warmth, are religious schools. The children do learn prayers, study the holidays and pass around a stuffed Torah. One parent said he was surprised to hear his 3-year-old walking around talking about “Hashem.”

Sherry Shameer Cohen pulled her son out of the local Chabad preschool in her Connecticut town because she wasn’t happy with the non-Jewish education. She said the teachers seemed very young and inexperienced.

Because Chabad preschools are religious-based institutions, in some states they do not have to meet the same licensing mandates as other preschools, including education requirements for teachers. In fact, some states don’t require faith-based day care to be licensed at all.

“The warmth, beauty and vitality of Judaism is celebrated and interwoven into every aspect of the children’s daily activities,” Batya Lisker, project administrator of The Machne Israel David and Lara Slager Early Childhood Initiative said about the preschools in an email to the Forward.

The Chabad preschools — the first ones opened in the United States in the 1940s — are also expanding to smaller towns across the country. Shannon Eileen Duke Becker lives in North Carolina and says that she was drawn to the Chabad program because unlike the schools at the local Reform and Conservative synagogues, it didn’t require children to be potty trained and took them as young as 18 months.

While ultimately I didn’t choose to send my daughter to a Chabad preschool, I can see the draw. At that age, when children are transitioning from the home to their first school experience, parents are looking for a place with patient teachers where they know the children will be cared for. It’s a vulnerable time for parents, and it sounds like Chabad understands that this is the moment to greet parents with open arms. Is this calculated? Sure. But it still beats being laughed at by a preschool director or being told you’ve got no shot at all at finding a spot.

The struggling Reform and Conservative movements might take a lesson from Chabad. If they want to reach parents like my friends and me, for whom Jewish preschool could lead to more involvement and a greater connection to the Jewish community, they should offer more Jewish child care and preschool programs. It’s not rocket science.

In the end, of all the arguments I heard in favor of Chabad preschool, this sealed it for me: “Because the Chabad programs are so worried about being kosher,” Sandler said, “they are never bugging you to bring snack or lunch. They provide it all.”