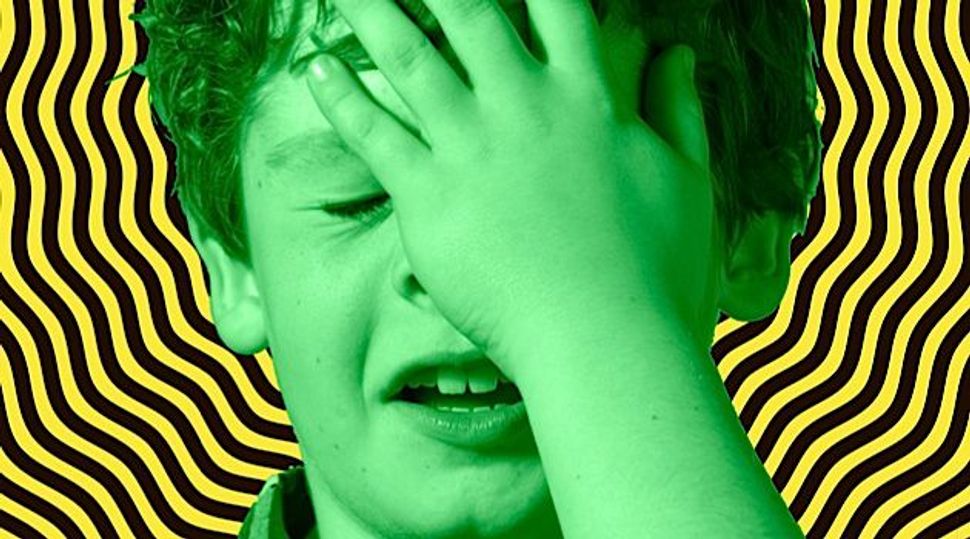 If you went to Hebrew school, you probably have one of these.

No, not a prayer book given to you by the sisterhood — though of course you have one of those, too (with the program from your bat mitzvah still stuck inside). I’m talking about something else: a story about a Hebrew school moment you’ll never forget. For some, it was a moment that made you love Judaism and all it stands for. Right?

Okay, for most of us it was pretty much the opposite. For me, in fact, it was the day I realized the real joy of finding a friend with whom to study a whole new language. Not Hebrew. “Pretzel-etzel,” a language wherein Susan Cohn and I inserted “etzel” into any word to make it harder for anyone else, especially the tetzel-eacher, to understand what we were setzel-aying.

And you? After asking around for folks’ most embarrassing moments at Hebrew school, here’s what we heard.(Some names have been omitted to protect the mortified):

I went to a reform temple for preschool and remember being cast as “Miriam” in the Passover play, and being so shy, I tossed baby Moses (a doll) into a basket and just ran off the stage. After that — maybe because of that — I was Candle No. 4 in the Hanukkah play.

According to my mother, when I was six, my teacher (the evil Mrs. Schlifkin) was telling us that God made the world and all of us. I insisted that God did NOT make me — my mommy and daddy did. My parents were then asked to remove me. And there went my formal Jewish education. A postscript: When high school rolled around, Mrs. Schlifkin used to substitute teach there, and she remembered me. Not fondly.

While my parents were getting divorced, my dad used to drop my twin brothers off at Hebrew school. After he left, they walked home to our house. My mom never told my dad. As for me: My friend Miriam used to bring Chinese food for a Hebrew school snack — the little spare ribs. I asked my mom to let me start bringing ribs, too, instead of a plum. So Hebrew school taught me about new foods.

Each Sunday morning a school bus would take me and my classmates to downtown Chicago to the College of Jewish Studies. For an entire year I got off the bus, hung around inside for a few minutes and then walked over to the Field Museum of Natural History, where I spent the next two hours. Then I caught the school bus back home. They never even took attendance — it’s impossible to flunk out of Hebrew school. Short of accosting the teacher, there’s nothing you can do. And they automatically assume you’re never going to be proficient in Hebrew, which takes the pressure off. So I passed the course. And almost became a paleontologist.

When I was young and in Hebrew school in the Lakewood area of New Jersey, my older rabbi had less than good hygiene. One day I told him that his beard smelled like my fishbowl at home when my fish and turtles died.

Oy. I’ve never really shared this, but here goes: I attended an after-school Hebrew school three times a week! Most kids got to stop once they had their bar or bat mitzvahs, but my parents made me do an extra year. I was 13 and in a class of eight boys — no other girls. A rabbi with a long beard sat at the head of a long, rectangular table. One day I sat right next to the rabbi and directly across from a cute boy I’d been flirting with. At one point we started playing “footsie” under the table (more like jokingly kicking one another), and when I kicked him back he didn’t flinch one bit. So I kicked again and again… until the kindly old rabbi stopped his lecture, looked straight ahead, cleared his throat and said, “Some things are inappropriate while learning Torah.” That’s how I realized who I’d been kicking — about a dozen times.

My most embarrassing Hebrew school moment is also coincidentally the most embarrassing moment of my life. Seriously. To be succinct: Synagogue talent show. Top falls off in front of 200 people, most of whom I know and all of whom knew me — and did I mention that my grandparents were two of the founding members of the synagogue? Returned to Hebrew school the following week and was met by merciless teasing by one boy. (I wish SO much I could call him out, but decorum forbids it.) Socked him squarely on the jaw. We wound up in the principal’s office. He was suspended.

I think I was maybe 10 when we had a LONG unit about the Holocaust (who didn’t?), and every kid had to say whether we would renounce our faith to avoid having ourselves and everyone in our family being killed by Nazis. No pressure.

I got my first period at Hebrew school. When I told my teacher, so I could ask for a pad, she said quite loudly, “You got your period?! MAZEL TOV!” in front of my class.