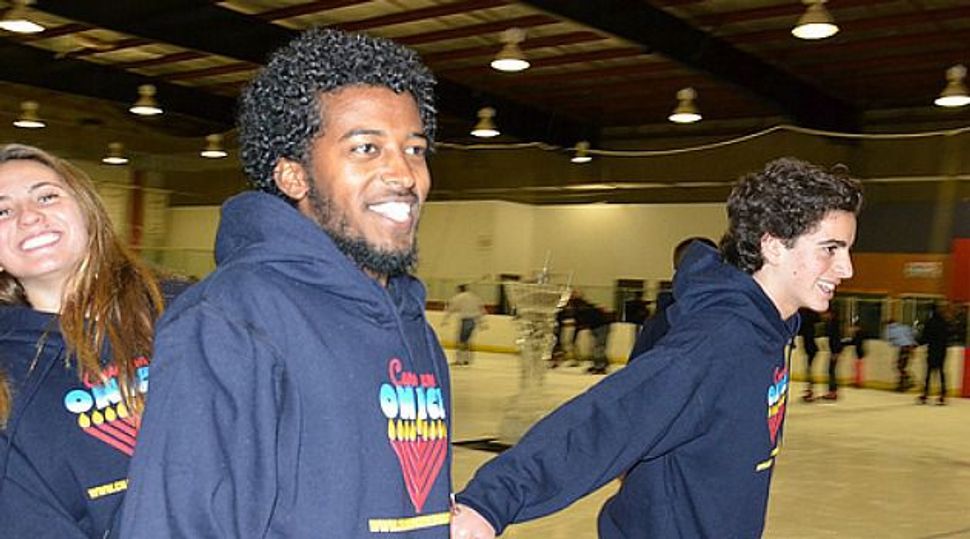 In a photograph snapped in December 2012, 17-year-old Mesfin Hodes hugs his friends at a skating rink at the annual Hanukkah on Ice celebration sponsored by American Hebrew Academy, where he is a junior. He wears a blue AHA sweater and a wide grin on his face. Originally from Ethiopia, he stands out in the photo. He’s the only student of color in the picture — and, in fact, the only one at the school.

Mesfin never imagined that he would one day attend a Jewish boarding school in North Carolina. At 6 years old, his biological parents abandoned him and at age 8 he was brought to Mother Teresa Orphanage in Addis Ababa. Soon after he was adopted by Rick Hodes, a well-known Orthodox Jewish doctor living and working in Ethiopia.

But while Mesfin loved living with his new family in Ethiopia, he says his father knew he would get a better education — and achieve his dreams — if he moved to America. And his biggest dream is to help the people he left behind back home. “I have received a lot — amazing, incredible stuff,” says Mesfin. “My life changed. I’m trying to give back as much as I can to the community I grew up in and to the people who are starving in Ethiopia.”

That’s why he started a charity project to raise money and collect clothing for children living in his former orphanage, through AHA’s “Four Corners Fund,” which helps students develop fundraising ideas into achievable goals. The money students collect over the academic year — typically thousands of dollars — is allocated to different charity projects. Last year, the students chose to send it to Mesfin’s former orphanage.

While most of his friends knew Mesfin’s story, some, like Andrew Dubin, heard it for the first time while helping Mesfin with the project. “It’s because he’s modest,” says Dubin, an 18-year-old senior at AHA.

According to his teachers and peers, Mesfin doesn’t broadcast his unusual background. “He doesn’t wear it on his sleeve,” says AHA principal Gary Grandon. “With all the things he has been through in his short life, the boy never stops smiling… He’s one of the happiest people I have ever met because he knows where he came from and he knows where he is and he really appreciates it.”

Mesfin is known around the school for his easygoing attitude. “The small things that the rest of us get concerned about don’t seem to bother him, because he’s been though so much,” says his former English teacher, Richard Smith. “He puts things into perspective.”

And Mesfin says he has a lot to be grateful for.

After his parents abandoned him, he had just one encounter with his mother. When Mesfin was 14, he was walking down a street in Addis Ababa when he heard a woman screaming, “You’re my son.” He turned to look at her. “I’ve never seen this woman. I thought she was crazy,” he says, but he stopped and talked to her and “I found out she was my mom.” That was the last time he saw her.

Rick Hodes adopted Mesfin when the boy was 8 years old, bringing him to his cramped house in Addis Ababa. “He sleeps in a corner of the living room curled up on two cushions, covered in an airline blanket,” Hodes wrote to a friend shortly after the adoption. Mesfin is the fifth Ethiopian child that Hodes adopted; he has no biological children of his own. A doctor for the American Jewish Joint Distribution Committee, Hodes treats Ethiopian children — many of them orphans — with congenital heart diseases, spinal diseases and cancers. He has worked on extreme cases, straightening the saxophone-shaped spine of one 18-year-old. He also treats Ethiopians immigrating to Israel and reports pressing health concerns to the Israeli government.

Mesfin calls him an “angel.”

“There’s days I see him getting an hour of sleep, maybe,” he says. “He’s just extremely dedicated to saving other peoples’ lives, to the pleasure of seeing them reborn.”

At first, Mesfin had a difficult time adjusting to his father’s faith. Living in Ethiopia, he says, he never really cared much about religion. “It was not something I agreed with,” he says. He was too busy worrying about where his next meal would come from or where he would sleep. But after being adopted by an Orthodox Jew, he began to reconsider.

“I was really not into religion at that time and when I came [to America], I was lost,” says Mesfin. His observant father wanted him to learn more about Jewish traditions, and initially sent him to a yeshiva in Denver. But Mesfin struggled with the strict rules there, and found the biblical texts inaccessible.

“I went to yeshiva straight out of Ethiopia,” he says. “It was crazy. It was too much. I had no background at all.” But learning about his father’s religion was important to him, so his father sent him to AHA, a pluralistic Jewish boarding school which his adopted brother had also attended — a place he now calls his second home, after Ethiopia. He says the school is more inclusive than the yeshiva, and not as strict religiously.

“I wanted to take it step by step, so AHA was a great place for that,” he says. “Now I’m learning a lot.”

He returns to Ethiopia almost every summer, where he fundraises for another orphanage called Hope for Generations. He is also at work on another project, a charity basketball tournament called Points for Peace, which he hopes will raise over $30,000 for the JDC and for Children’s Cross Connection International, an interfaith medical care and education organization started by Jews and Christians.

If he becomes the “richest man in the world,” like he jokes he wants to be when he gets older, he knows how he will use the money: helping other people, just like his father helped him.

“Growing up, I actually really thought about how I just might die the next day. I didn’t really think about what’s gonna come next, am I gonna go to college,” he says. Now, he thinks about the future. He says maybe one day he’ll study business in college. “I’m here because my dad gave me a second chance. I want to do the same for others.”

Vicky Tobianah recently graduated from McGill University with a Bachelor of Arts with honors in Political Science and English Literature. She is a freelance writer based in Toronto.