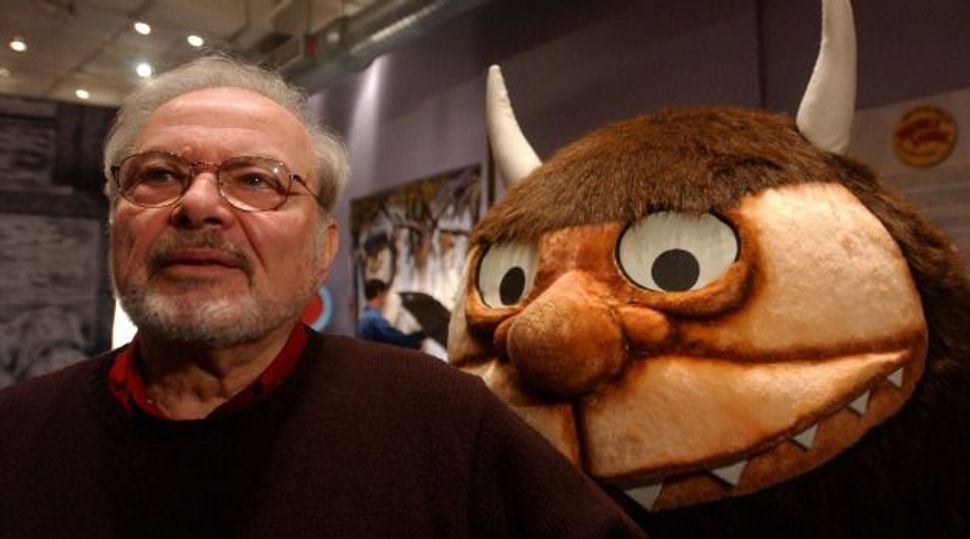 Wild Things Run Fast: The creator of ?Where The Wild Things Are? and ?My Brother?s Book? passed away last spring at the age of 83. Image by Getty Images

Probably the best stage direction in the history of theater occurs in Act III of William Shakespeare’s “A Winter’s Tale.” A storm brews on the coast of Bohemia, where Antigonus, on orders of the king, is abandoning his child, Perdita. “I am gone forever,” Antigonus declares shortly before a wild thing chases him down. “Exit, pursued by a bear.”

It is a tribute both to the late Maurice Sendak’s erudition and to his mordant, morbid wit that this brief line could serve both as his epitaph and as a subtitle to his final work, “My Brother’s Book.” In this slim, gorgeously illustrated tale, set in Bohemia in “bleak midwinter,” Sendak, who died in May 2012 at the age of 83, riffs not only on Shakespeare, but also on poems by Emily Dickinson and Christina Rossetti, and, perhaps most important, on his own oeuvre, as he relates the story of Guy, who lets himself be devoured by a bear so that he may find his brother Jack, who has been encased in ice.

Ostensibly, Sendak wrote the book as a sort of Kaddish both for his late brother, Jack Sendak — also a children’s book writer — who died in 1995, and for Eugene Glynn, Maurice Sendak’s longtime partner, who passed away in 2007. “I cry a lot because I miss people. They die and I can’t stop them. They leave me and I love them more,” Sendak told NPR’s Terry Gross on “Fresh Air” in December 2011.

The playwright Tony Kushner, who collaborated with Sendak on “Brundibar,” has called “My Brother’s Book” “Maurice’s gut geschrei and grown-up goodbye.” But “My Brother’s Book” is more than just an elegy. It serves equally well, if not better, as an almost unbearably poignant reflection of an artist who is watching his entire life and career pass before his eyes as he confronts his own mortality.

And if there is any quibble at all to be had with this lovely book, it is that its size does not entirely do justice to the artwork, which would be best viewed on the walls of a museum rather than in a 6-by-9 inch hardback.

To experience “My Brother’s Book,” which comprises only about a dozen pages of text and an equal number of accompanying watercolor illustrations, plus a foreword by Shakespearean scholar Stephen Greenblatt, is to once again sail over a year and in and out of weeks and through a day and into the night, to arrive once again in the sublimely haunted land of Maurice Sendak. The brothers’ names return us to the boys in “We Are All in the Dumps With Jack and Guy”; a rhymed couplet (“In February it will be / My snowghost’s anniversary”) offers a somewhat darker take on a very similar line in “Chicken Soup With Rice.” And the bear — such a playful figure in Sendak’s “Little Bear” stories — becomes something more akin to a bloodthirsty beast crying, “We’ll eat you up, we love you so” in “Where The Wild Things Are,” a book I loved so much as a child that I never wanted to own it, because checking it out was something I looked forward to each time I went to the library. (For the record, I was less enthusiastic about “In the Night Kitchen,” for reasons that had little to do with the book’s controversial nudity and everything to do with what I found to be the story’s essential creepiness.)

In person, Sendak could be both a cantankerous grump and a devilish prankster, making mischief of one kind or another, and on the two occasions I met him, I encountered both versions of the man. Interviewing him when he was at his home in Ridgefield, Conn., where he had just completed the delightful and underrated book “Swine Lake,” a collaboration with the late James Marshall, I was struck by Sendak’s ability to speak at length about Shakespeare, Herman Melville, Sergei Prokofiev and dozens of other favorite artists of his while liberally peppering his conversation with well-chosen profanity.

Encountering him later at the Children’s Museum of Manhattan, where he was appearing to promote an exhibit of his artwork, I could barely coax more than a few syllables out of the man as he doodled an anatomically correct cartoon of a boy on the title page of one of his books.

Neither of those Sendaks — the wag nor the crank — makes much of an appearance in the pages of “My Brother’s Book.” And any reader hoping that, in his final book, the atheist Sendak would embrace religion, in particular his Jewish heritage that infused much of his work, will find those hopes left unfulfilled. Though the images here have mythological overtones and, in certain instances, recall the work of Sendak’s beloved William Blake, the only religion to which the artist truly pays fealty here is that of art itself, and all of the beauty that Sendak is leaving behind.

On the last page of “My Brother’s Book,” Jack, reunited with Guy at last, lies safely asleep, curled up beside his brother. “Good night,” Guy whispers. “And you will dream of me.” And no doubt we will — for many years to come.