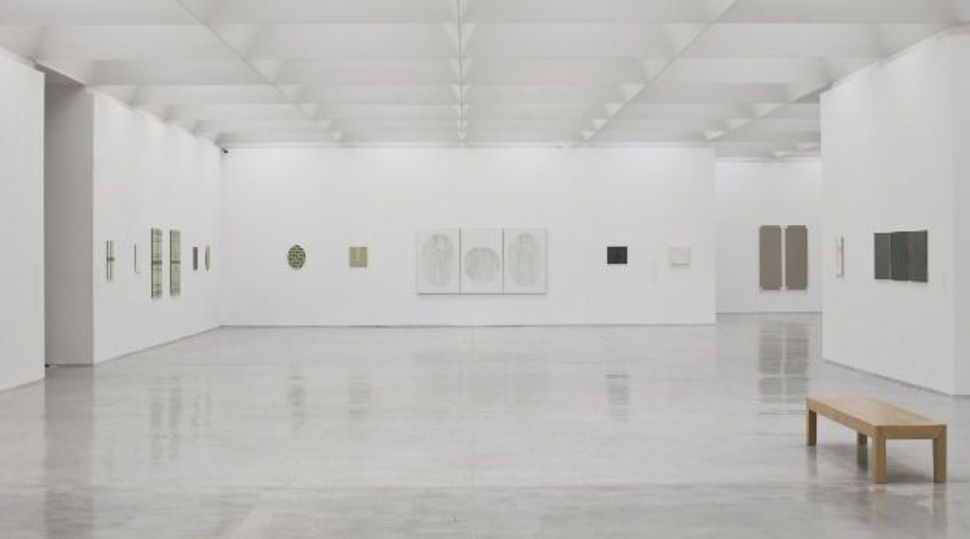 In A White Room: Joshua Borkovsky?s work is currently on display in the ?Veronese Green? exhibit at the Israel Museum. Image by Courtesy of Israel Museum

At first glance, the work of contemporary Israeli painters Israel Hershberg and Joshua Borkovsky may seem quite different. But actually, the two artists — both of whom are the subjects of exhibitions at Jerusalem’s Israel Museum — complement each other remarkably well, for both exhibits concern the act of painting itself.

“Fields of Vision: Landscapes by Israel Hershberg” presents three large-scale landscapes, two Umbrian and one of Tel Kakun in Israel’s Hefer Valley, and a preparatory study of a landscape in Roman Campagna. In 1998, Hershberg founded the Jerusalem Studio School to return artists to the study of painting from observation, and these works mark Hershberg’s movement from the careful study of still lifes to exterior landscapes.

Hershberg does not attempt to create exact replicas of landscapes; rather, he creates new representations. Regarding his view of the ideal artist, Hershberg told the blog “Painting Perceptions”: “He does not obstruct by imposing his own feelings on the matter, rather, he effaces himself before what is an overwhelmingly emotional event. You know, giving way and yielding to awe. And as he is awed, we are in awe.”

As one stands before Hershberg’s landscapes, the small gallery becomes a meditative space; the viewer is swept up into the light that pours onto the expansive skies. “Aria Umbria II” is the representation of a landscape as seen through an oval window. That we observe the window through which the painter looks suggests that these paintings are about the acts of seeing and beholding.

The Borkovsky exhibition, “Veronese Green,” features 58 works from 10 cycles of his paintings created between 1987 and 2012. Paintings from different cycles appear next to each other so that the images appear to be in dialogue. Borkovsky creates works in open-ended cycles: One painting might differ only slightly from the next, as if we are seeing with each additional painting the painter’s mind at work as he attempts to get closer to his vision of what he is trying to represent. Two cycles of paintings, “Leda and the Swan” and “Echo and Narcissus,” refer to Greek creation myths and serve as metaphors for the creation of the art itself, for how a thing of beauty can be created through pain and labor.

The cyclical nature of Borkovsky’s works helps to create a feeling within the galleries that time has been suspended. The works allude not only to Greek mythology, but also to early photography. When I looked at the large, rectangular canvases of “Echo and Narcissus,” a diptych in gold leaf and oil with small white rectangles on the corners, I was reminded of black-and-white photos in my father’s old photo album, with the white-paper corners holding them in place. Many of the paintings here evoke the image of photographs in the process of being developed in a darkroom.

Gazing at repeated, overexposed and underexposed images, or at paintings that shimmer and shift in the light, can create in the observer a hypnotic sensation. Looking at the iterations of reflection, shadow, lines and light inspires a meditative calmness much as one feels when looking at Hershberg’s landscapes. With both painters’ works, there are no brushstrokes or expressionistic emotion, no evidence of the human painter. These canvases are as smooth as the mythical pond of Narcissuss.

In both exhibits there is a serenity that can cause the viewer to forget that so much labor went into these artworks’ creation. Looking closely at the precise lines in Borkovsky’s “Vera Icon” and “Apelles’ Line” cycles, one might be amazed that a human being created them. That very contradiction, the illusion of the work being created without human labor, is part of the myth, and illusion making, inherent in the creation of art, which is at the heart of Borkovsky’s work. Indeed, the very title “Vera Icon” is a reference to the myth of Veronica, who on seeing the suffering of Jesus on the way to his crucifixion, wipes his face with her veil, then later finds on her veil an imprint of Jesus’ face. It’s as if Borkovsky aspires for all of his paintings to be like Veronica’s veil, representations that have come into existence without human intervention.

Of course, we know on some rational level that Borkovsky’s act — like Hershberg’s — of removing himself from his paintings is inherently impossible. Yet it is in that balancing act, or within the space between the illusion and the apprehending of the illusion, that art lies. In the end, we, the viewers, are made complicit with Borkovsky in the illusion making, just as the audience is in a magician’s act.

In one “Echo and Narcissus” work, the canvas shimmers silver, with small rectangular imprints suggesting windows. Against the background, I could see a vague shadow of my reflection; seeing an image of myself made me consciously aware of my act of gazing, and yet I could still efface myself and give in to the beauty of the work. Seeing one’s own image prevents the painting from becoming an idol, a graven image; instead, as if by magic, the viewer becomes as much a part of the experience of the painting as the painter.

Laura Hodes writes frequently about fine art for the Forward. She is a writer and attorney living in Chicago.