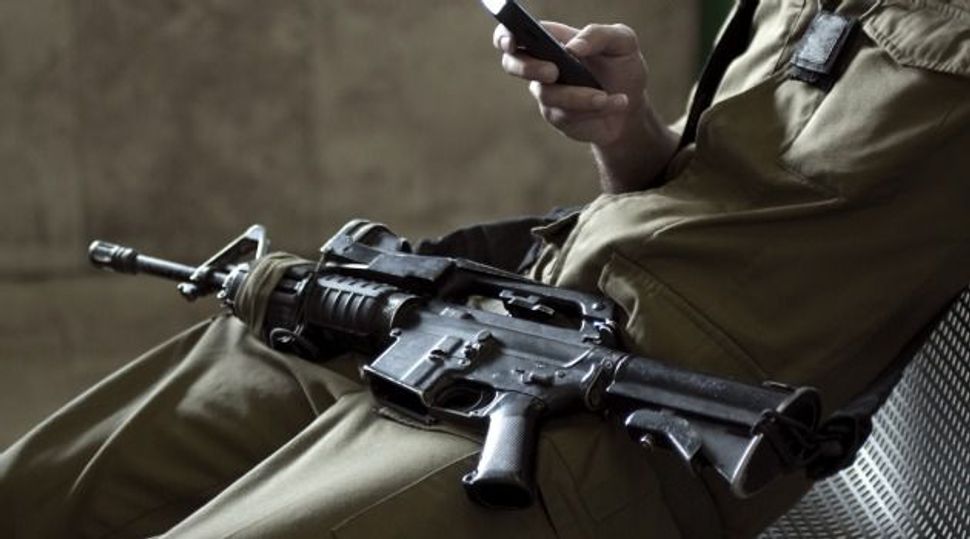 Man In a Glass Booth: The phrase shin-gimmel refers to a battalion guard. But it has also come to mean a scapegoat. Image by Thinkstock

Two headlines dominated a page of The Marker, the economic section of the Israeli newspaper Haaretz, on January 29. The first, captioning a straight news item, read (in my English translation): “Hershkovitz Stuns Finance Ministry: Fires Deputy.” The second, introducing a commentary on this development by correspondent Nehemia Strassler, declared: “Instead of Tackling Problems — Blame the Shin-gimmel.”

For you Forward readers, this needs some footnoting. “Hershkovitz” is Gal Hershkovitz, director of the ministry of finance’s budget division.

The deputy he fired was Eyal Epstein, the economist responsible for the budget figures that the ministry presents to the government of Israel and the Knesset. He was fired because of the unexpectedly huge deficit that the government ran in 2012, which will now lead to higher taxes and to slashes in public expenditures. “Blame the shin-gimmel” — ah, that’s a bit more complicated.

The Hebrew letters shin-gimmel stand for the words shomer g’dudi, “battalion guard.” That doesn’t mean very much in English, but every Israeli knows what a shin-gimmel is: He’s the soldier who sits in a little booth by the gate to a military base and lets no one unauthorized enter. He inspects the papers of anyone he can’t identify by sight and raises and lowers the barrier that bars or admits motor vehicles.

It’s not a thrilling or highly skilled job, which is why it’s usually assigned to the lowliest soldiers on a base. The four-hour shifts of it that I remember from my weeks of basic training were not the high points of my military career. They did, though, include one memorable incident. Late one night, a car with a military license and two passengers drove up to the barrier at which I was the shin-gimmel.

I waited, as I was supposed to do, for the driver, whose face I couldn’t make out, to present his credentials. He honked. I waited some more. He honked again. I stuck to my guns. He stepped out of the car and shouted at me to open the gate. He was, he said, the boyfriend of the base commander’s daughter, whom he was bringing home from a date. He was also, I realized at that exact moment, a cousin of mine, a pilot in the air force. We had a good laugh and met again at the wedding.

I’m not sure, however, that I would have stuck to my guns if the pilot in question had been pointing a gun at me. That’s what happened years later, on the night of November 25, 1987, to a young soldier named Roni Almog, who was the shin-gimmel at a paratrooper base in northern Israel.

Unbeknown to him, two gliders flown by members of Ahmed Jibril’s Popular Front for the Liberation of Palestine had managed to cross the border undetected from Lebanon and then land in Israel. The pilot of one was killed immediately. The pilot of the other made it to the base that Almog was guarding and opened fire. Almog panicked and ran away, and the Palestinian entered the base and killed five of the paratroopers before he was shot.

An investigation was held. The entire blame was laid on Almog, who was court-martialed and sentenced to a year-and-a-half in prison. Although no one doubted that he should have been punished, there was criticism of the investigators for not bothering to ask how the gliders had escaped radar detection in the first place. This grew fiercer when it was revealed that there had been advance intelligence of the attack but that forces on the ground had not been put on the alert — and to compound matters,

Almog’s father then successfully snuck unnoticed into the headquarters of Israel’s Northern Army Command in order to prove that its bases were inadequately protected and that no shin-gimmel should bear sole responsibility for their penetration.

The expression “blaming the shin-gimmel” resulted from “the night of the gliders,” as the event came to be known. Subsequently, it entered the Israeli vernacular as a general way of referring to putting the onus for a mishap on someone at the bottom of an organizational hierarchy while whitewashing those at the top.

“They’re out to get the shin-gimmel again,” began a newspaper article demanding that defense minister Ehud Barak, and not just naval officers, be held to account for the 2010 Mavi Marmara incident, in which nine Turkish civilians running the blockade on Gaza were killed. “I haven’t stopped at the shin-gimmel,” state comptroller Micha Lindenstrauss announced last year, in publicizing his report on the Carmel forest fire in which 44 Israelis died.

Eyal Epstein occupied a higher office than does your ordinary shin-gimmel. Still, Nehemiah Strassler’s meaning was clear: Don’t blame the deputy when those above him, including the boss who fired him, are at fault, too. Unfortunately, if you’re looking to pass the buck, it’s easiest to let it roll downhill.