Story’s the Same, Only the Shul Has Changed 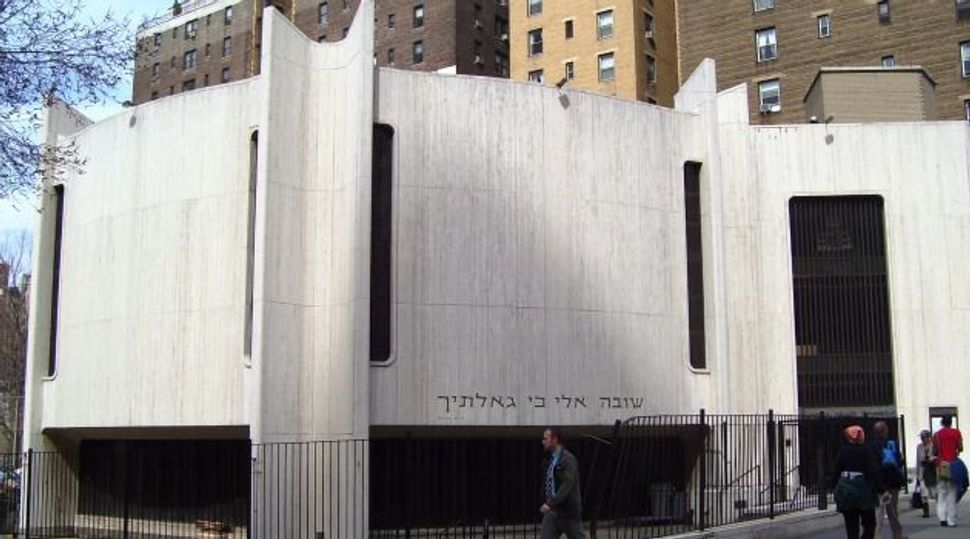 Bring On Your Wrecking Ball: In its heyday, Lincoln Square?s sanctuary-in-the-round was considered to be daring. Image by WIkimedia Commons

Most of the time, I live in one world and write about another. But now and then, the two collide, making for a lively conjunction. The other day, I was researching an article about the razing, in 1927, of Temple Emanu-El, arguably New York City’s premier Reform congregation, when it was located in the very heart of Midtown Manhattan. I no sooner finished putting pen to paper — or its digital equivalent — when I learned that Lincoln Square Synagogue, a Modern Orthodox congregation in my neighborhood on Manhattan’s Upper West Side, was imminently facing the wrecking ball.

I was struck hard by the coincidence. Though separated by a span of 86 years, as well as by a radically different approach to Judaism, Temple Emanu-El and Lincoln Square Synagogue are bound together by their fate, which has little to do with heavenly matters and everything to do with the value of their respective properties here on earth. Caught up in the currents of New York’s real estate market — which then, as now, were nothing if not volatile — both congregations accepted an offer that was simply too good to refuse. The result, as The New York Times observed in a valedictory salute to Midtown’s Temple Emanu-El, was “change, change everywhere.” And therein lies my tale.

Temple Emanu-El resides resplendently on Fifth Avenue and 65th Street, where it has been since the late 1920s. Its equally glorious predecessor hugged the corner of Fifth Avenue and 43rd Street for nearly 60 years. Today, a streamlined skyscraper calls that choice parcel its home, but between 1868 and 1927, a Moorish-style synagogue with two egg-shaped minarets (minarets?!) and a pleasing superfluity of “Saracenic” detail, as one observer fancifully put it, occupied the space.

Contemporary observers were agog at the beauty of the synagogue’s interior. “Whatever splendor can be produced by modern skill and art is shown here to full advantage,” rhapsodized the Israelite, a leading American Jewish newspaper, at the time of the synagogue’s consecration. At once a statement of modernity and of exoticism, the sanctuary boasted 500 gas lights, which brilliantly illumined its vast space; a ceiling set with a “constellation of stars”; a “profuse” amount of gilding just about everywhere, as well as handsome oak pews “furnished with book-racks, foot-boards and hat-stands under the seats.” And if that weren’t enough to make worshippers comfortable, the “ventilation throughout the house,” we are told, was “perfect.”

Passersby were equally enchanted by Temple Emanu-El, especially if they happened upon the building just as the sun’s rays were about to set. At that moment, a New Yorker “may well fancy himself transported to distant lands and bygone times,” one of them related, adding that Temple Emanu-El was “one of the few distinctly Oriental examples in the panorama of New York architecture.”

The synagogue’s manifold charms, though, were not enough to hold change at bay. Little by little, Midtown Manhattan succumbed to increasing commercialization, a process rued by The New York Times, which, in a February 1926 article titled “One by One, the Avenue’s Landmarks Go,” cataloged Fifth Avenue’s transformation from a genteel residential street into a “restless, urgent” commercial artery. Temple Emanu-El’s home was among the casualties of change. Before long, it, too, came to be valued as a commodity, prompting a series of unusually complicated real estate transactions that culminated in the synagogue moving to a brand-new location, a mile or so uptown.

For all the excitement and sense of possibility that attended this new chapter in Temple Emanu-El’s history, the synagogue’s congregants found it difficult to part from their familiar surroundings. Though their rabbi, H.G. Enelow, reminded them at the very last service that “when we leave our temple, we leave only the building,” teary-eyed members clustered in the lobby “as though hesitant to leave for the last time,” an eyewitness reported.

Fast-forward to 2013. I heard echoes of Enelow’s gentle admonition at Lincoln Square Synagogue’s farewell service only a few weeks ago, when Sherwood Goffin, the beloved cantor who has been with the congregation since its origins, reassured a standing-room-only crowd that Lincoln Square Synagogue was not giving up the ghost or relinquishing its memories, but simply moving down the block to a new and much improved facility.

For more than 40 years, Lincoln Square Synagogue had called a travertine-clad building on Amsterdam Avenue and 69th Street its home. When it opened its doors in 1970, its sanctuary-in-the round was considered rather daring, especially for an Orthodox congregation. As much a social statement as an architectural one, its unusual geometry held out, and made manifest, a vision of inclusiveness that drew thousands of young American Jews.

Some architectural critics were not so beguiled. The AIA Guide to New York City made the following observation: “The theaters of nearby Lincoln Center set the travertine tone for the area, and this mannered, curvy, articulated synagogue picks up the cue.” So far, so good. It then went on to note — rather snarkily, I should add — that inasmuch as the synagogue was adjacent to a bank, “the two together seem to be making an inadvertent comment about money changers at the temple.”

Ironically enough, one man’s snark turned out to be another’s good fortune. The congregation’s decision in the 1980s to purchase the property next door — “to buy the bank,” as the fund-raising campaign was colloquially called — enabled it not only to accommodate a steadily growing number of congregants, but also to assemble a very nice, and increasingly attractive, piece of real estate.

Years later, when developers came a’calling, Lincoln Square Synagogue availed itself of the opportunity to sell the property and, well, you know the rest of the story: A cherished building comes down, and a new one takes its place, while history looks on and waits.

Story’s the Same, Only the Shul Has Changed