The Jewish Guy Who Killed Spiderman 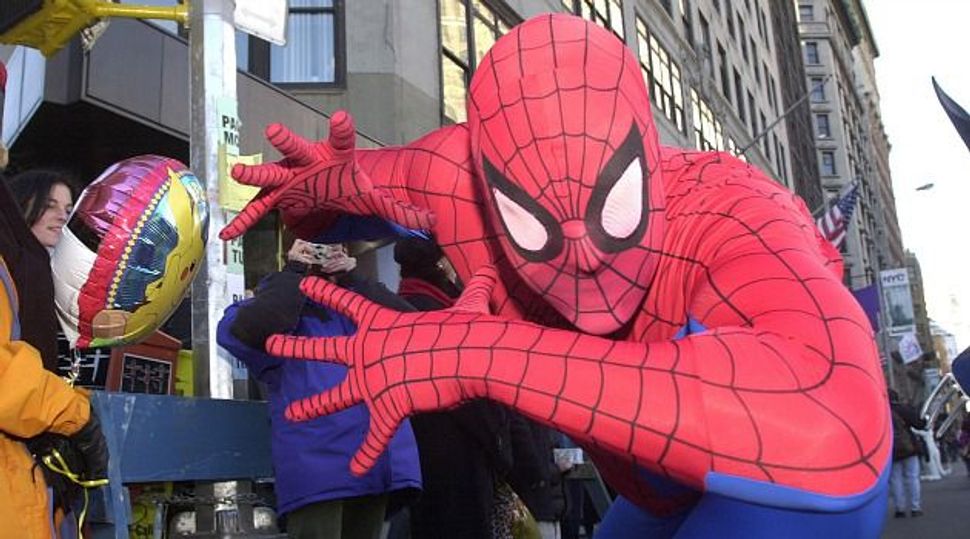 Spiderman heroically dispatched countless foes since he arrived on the scene in 1962.

In 2000, Bendis was hired to write Ultimate Spiderman, a modern-day retelling of the classic Spiderman story. More than 10 years, 160 issues and several blockbuster Hollywood adaptations later, Bendis did the unthinkable, killing off the superhero’s famous alter ego, Peter Parker, and replacing him with a half-black, half-Hispanic 13-year-old named Miles Morales.

The change received national attention. Glenn Beck said Morales looked like President Barack Obama – and not in a good way. Lou Dobbs didn’t like the change either, prompting Jon Stewart to quip that Morales represented Dobbs’ worst nightmare: “a Latino that can climb walls.” But Bendis is unrepentant.

“Marvel is a representation of the real world,” Bendis explained from his home in Portland, Ore. “The Marvel Universe takes place in New York. Miles lives in Brooklyn – it’s actually Brooklyn. That’s a huge difference going back to my time as a crime writer. The city becomes a character you’re writing about.”

Bendis, 45, may be the most important comic book writer working today. He helped re-launch the Daredevil, Spiderman and the Avengers franchises, and his titles typically sell more than 100,000 copies, making him among the most popular comic book writers in the world.

“Brian is a unique and important voice in modern comics,” said Danny Fingeroth, a longtime Marvel editor and the author of “The Stan Lee Universe.” “He displays a profound understanding of, and respect for, the histories of the characters and their universe, but understands that they have to be updated for a modern readership.”

Raised by a single mother in Cleveland, Bendis attended an Orthodox day school and discovered comic books as an adolescent.

“I studied them like the Torah,” he said. “I memorized the ads. At 5, I literally stood on the sofa and said ‘I will be the artist on Spiderman.’ ”

Like others drawn to stories of caped crusaders and mega-muscled heroes, Bendis was searching for a stand-in for his absentee father. Stan Lee, the Jewish co-creator of Spiderman and other comic book heroes, became something of a father figure for him. But the rabbis who taught him as a child weren’t too fond of Bendis’ hobby, fearing that his penchant for drawing men in tights indicated he might be gay.

“I would just start drawing without thinking and [suddenly] it’s a bunch of naked guys and I’d get sent home,” Bendis said.

After high school, Bendis attended the Cleveland Institute of Art. An independent comic book publisher picked up his final thesis and published it. After graduation, he continued working on comic books but supported himself doing freelance illustration and caricatures at bar and bat mitzvahs.

“It’s the lowest form of human existence – and I worked at McDonald’s,” he said.

Through the 1990s, Bendis hustled his work on the road with fellow independent comic book creators. Those years were somewhat of a golden age for the independent comic scene, producing a bevy of talented, original creators. But the period was financially rough for Bendis and his wife, Alisa, whom he met while doing a freelance assignment for the Hillel Foundation.

Even his successes didn’t change the basic financial equation. The day after his work on the crime comic JINX won an Eisner Award, the comic book equivalent of an Oscar, he was back at a bar mitzvah drawing caricatures.

Bendis’ explosion on the independent comic book scene coincided with a shakeup at Marvel Comics, the largest comic book publisher in the world. A new president and editor in chief wanted a fresh voice for the company. Joe Quesada, then the editor in chief, called Bendis in 2000 and told him that he wanted to bring him to Marvel.

“I asked, ‘What do you need an artist for?’ ” Bendis recalled. After what Bendis describes as a long “dead” silence, Quesada finally answered, “ ‘You know your art isn’t that good, but you’re an amazing writer.’ ”

Bendis’ first assignment was a four-issue run on Marvel’s Daredevil. After the first two issues, Quesada asked him if he was interested in writing Ultimate Spiderman. The series became one of the best-selling comics of the decade.

“He’s really terrific,” Sean Howe, author of “Marvel Comics: The Untold Story,” said of Bendis. “I think he’s one of the few comic book writers that has a really singular voice in terms of dialogue. He just has the snappiness of a really great crime novelist.”

The couple’s financial worries were over. Bendis finally had regular comic book work and his original graphic novels were optioned for movies. He and Alisa began thinking about starting a family.

Doctors told Bendis that Alisa wouldn’t be able to have children, but as they prepared to adopt, she became pregnant with their daughter, Olivia. Later the couple adopted Sabrina from Ethiopia and, three years later, a third daughter, Tabatha, through a domestic adoption program.

“Adoption is something I’m insanely proud of,” Bendis said. “My wife wanted to make a family of the world and help raise children with a lot of love that they might not have gotten otherwise.”

Bendis raised the idea of shaking up the Spiderman franchise at a Marvel creative retreat.

“We thought about what we wished we could do differently,” he said. “We talked about that the New York in Marvel comics isn’t the one you see when you walk outside the door.”

Ultimate Spider Man No. 160 was published in 2011. In that issue, Peter Parker is killed by his archenemy, the Green Goblin. Morales makes his debut in the next issue and inherits his super powers after being bitten by a genetically engineered spider.

The Jewish nature of comic book superheroes has long been an object of speculation, with much attention focused on post-Holocaust Jewish psychology and the yearning for powerful protectors of the innocent. But Bendis traces the connection back even further.

“The Torah is full of mythological sources of father and son, and so is Marvel Comics,” Bendis said. “I think about my upbringing with a single mother – I have father issues – I was born to do this. That’s why I can write.”

The Jewish Guy Who Killed Spiderman