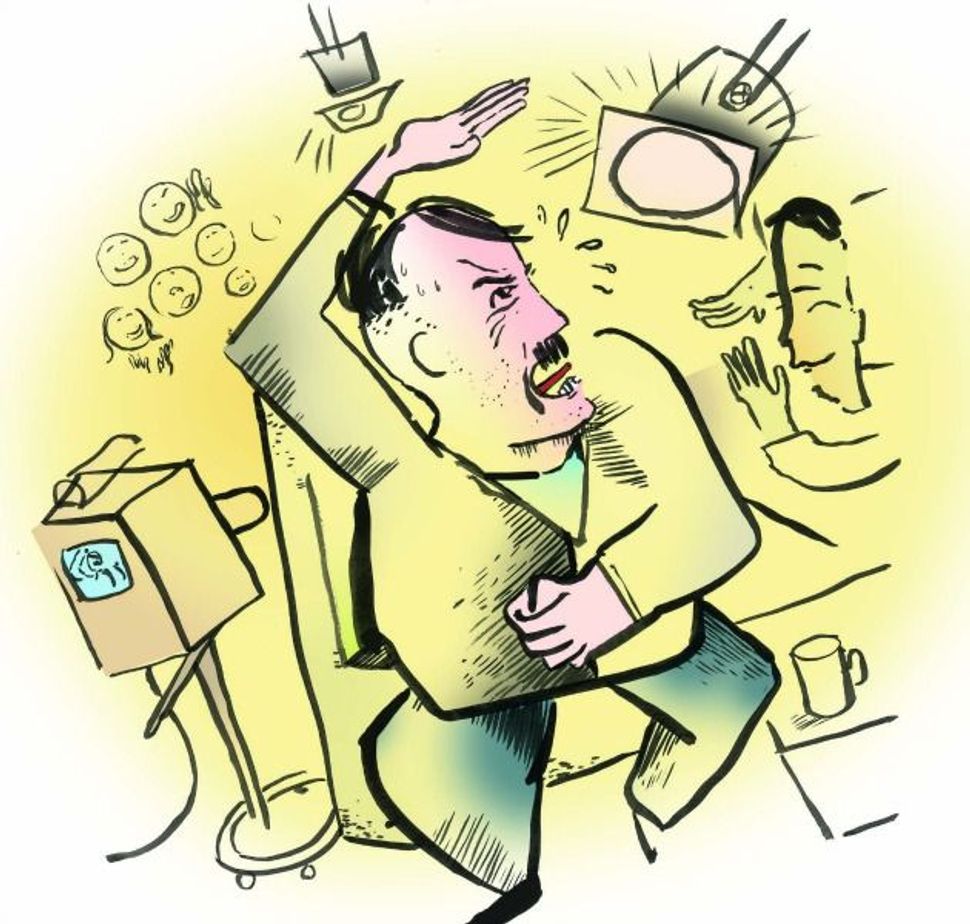 Although he has been dead for nearly 70 years, Adolf Hitler continues to make headlines. In recent years, the Nazi dictator has become an inescapable presence in Western political and cultural life, serving as a polemical trump card in political debates, a demonic star in feature films, a marketable symbol in advertising campaigns and an iconic figure on Internet websites.

Every time Hitler makes an appearance in the news, commentators rush to interpret its significance. In the same way that Kremlinologists during the Cold War sought to determine how the latest Politburo statement reflected shifting Soviet policies, today, scholars of memory seek to determine what the latest Hitler headlines reveal about contemporary views of the Nazi past.

The latest example of this phenomenon is currently taking place in Germany, where a new novel featuring Hitler has recently shot up the best-seller lists and has prompted reflections about the reasons for its success. Written by German journalist Timur Vermes, “Er Ist Wieder Da” (“He’s Back”), features an unusual counterfactual premise: What if Adolf Hitler suddenly came back to life in present-day Germany?

In pursuing this fanciful premise, “Er Ist Wieder Da” adopts a satirical approach that accounts for much of the novel’s popularity. Indeed, its best-seller status testifies to the yearning of many Germans to adopt a more normalized perspective toward the Nazi era.

“Er Ist Wieder Da” is narrated in the first person by Hitler himself in a longwinded, histrionic style familiar to readers of “Mein Kampf.” As the novel opens, the ex-dictator describes waking up in an empty lot in the middle of Berlin, unclear as to why he is still alive. Like a Japanese soldier emerging out of decades of self-imposed jungle isolation, Hitler spends many of the early chapters trying to make sense of his new surroundings.

The novel’s humor derives partly from the former Führer’s naive reactions to present-day German life. Having missed out on 60 years of the country’s postwar history, Hitler perceives everything from an obsolete Nazi perspective. He believes, for example, that the presence of Turks on Berlin’s streets is a legacy of his successor Karl Doenitz’s effort to bring Turkey into the war on Germany’s side. And he erroneously thinks that Wikipedia’s linguistic resemblance to Wikinger, the German word for Vikings, means that the website has Aryan roots.

In these and other ways, “Er Ist Wieder Da” allows readers to laugh directly at Hitler. They can laugh at his ignorance, his destitution (he has no money, no job, no home), and the incongruous image of him wearing blue jeans and sneakers, which are lent to him by a kindly Berlin kiosk operator who takes pity on the ex-dictator.

Every one of these examples highlights how Hitler, stripped of his dictatorial power, can be funny. Particularly comical is the fact that Hitler preserves his delusions of grandeur despite his lowly circumstances. Throughout the novel, he insists that “destiny” has enabled him to survive in order to rescue Germany from its present-day plight. Yet he repeatedly runs up against an intractable problem: No one is able to recognize him for who he really is. Instead, ordinary Germans routinely misidentify him either as one of the country’s many Hitler impersonators or a comedian deeply committed to a life of method acting.

This running gag in “Er Ist Wieder Da” is meant to entertain, but it also serves as a critical commentary on the increasingly satirical representation of Hitler in contemporary popular culture. When the novel portrays young German teens as unable to recognize Hitler as a real historical figure, the text critiques the corrosive impact of humor on historical consciousness.

Indeed, as it unfolds, ”Er Ist Wieder Da” takes a moralistic turn by showing the dangers to which laughing at Hitler can lead. Early on, the kiosk owner’s admiration of Hitler’s “impersonation” of the führer prompts him to introduce the ex-dictator to a friend who works for a television station. Before long, the novel (in homage to the film “Network”) portrays how the station, seeking to boost its ratings, invites Hitler to appear as a guest on the talk show of a Turkish comedian. In his short appearance, Hitler predictably launches into an epic rant (mostly about foreigners) and becomes an immediate hit in no time at all, a YouTube sensation.

The joke is that while Hitler is being deadly serious, his fans think he is being ironic. No amount of evidence convinces the German public otherwise. Journalists try to get Hitler to divulge his “real” name and to explain why he never breaks character. No one wants to consider the possibility that his racist rants are genuine and not those of an avant-garde comedian.

The consequences of this tendency, the novel goes on to show, are ominous. By sustaining the public’s desire to laugh at Hitler, the German media boosts his popularity. Soon enough, he gets his own TV show and a book contract. His colleagues congratulate him by ironically referring to him as the “Führer” and giving him mock Hitler salutes.

Yet, these gestures proceed in a disquieting direction, for as the novel concludes, posters prepared for his upcoming show display the slogan “Not everything was bad.” Laughing at Hitler, the novel suggests, paves the way toward rehabilitating him.

In arriving at this cautionary conclusion, “Er Ist Wieder Da” tempers its slapstick style with a moralistic message. Vermes has been quoted as saying that his comic depiction of Hitler is meant to counteract the traditional portrait of him as a monster. That view, he contends, has long impeded any understanding of how Hitler appealed to millions of Germans. Further, it has provided them with an easy alibi with which to avert blame for their country’s descent into evil. Laughing at Hitler, by contrast, humanizes him and lays bare his historic (and potentially enduring) appeal.

This moral message notwithstanding, “Er Ist Wieder Da” runs a risk common to many narratives that have explored the roots of Hitler’s appeal — namely, the risk of glamorizing what it means to condemn, giving voice to racist ideas in the process of making fun of them.

To be sure, “Er Ist Wieder Da” protects itself from the charge of being “soft” on Nazism by showing Hitler receiving his comeuppance at the novel’s end, when he ironically gets beaten up by neo-Nazis who think he’s a Jew trying to discredit Nazism with his “comedy act.” The novel’s opposition to right-wing ideas is further visible in its many darkly ironic references to Nazi anti-Semitism and the Holocaust.

This fact notwithstanding, “Er Ist Wieder Da” normalizes the Nazi past by encouraging Germans to laugh at it. Ever since the films of Charlie Chaplin, Ernst Lubitsch and Mel Brooks, Anglo-American audiences have laughed at Hitler. But only in the past decade have Germans begun to do so. Films such as Dani Levy’s “My Führer” and comic books such as Walter Moers’s “Adolf the Nazi Pig” testify to a growing German desire to become as “normal” as their Anglo-American neighbors and laugh at the Führer. “Er Ist Wieder Da” shows the dangers inherent in this desire, but the book’s best-seller status speaks to its ongoing appeal.

Moreover, the novel allows readers to laugh not merely at Hitler, but also with him. At various junctures, Hitler launches into rants against things that many of us despise: vapid television shows, soulless chain stores, noisy leaf blowers and opportunistic politicians. “Er Ist Wieder Da” turns Hitler into a mouthpiece for any number of contemporary complaints. In the process, the novel not only gets readers to identify with Hitler, but also universalizes his significance. By inserting Hitler into the present instead of the past, it shifts attention away from his real historical importance.

In the end, “Er Ist Wieder Da” may be most significant for highlighting fading fears of Nazism. Until recently, the counterfactual premise of Hitler surviving World War II and returning to power was portrayed as a nightmare, reflecting real anxieties that Nazism had not been banished from history.

In the last generation, however, Germany’s post-unification stability has diminished these fears and made the theme of Hitler’s survival the stuff of laughs. As the passing of time continues to normalize the memory of Nazism, more such portrayals of Hitler can be expected.

Should they be of concern? Laughing at historical villains like Hitler need not diminish their aura of evil. Jews mock Haman each year on Purim, and yet retain a sense of his historical criminality. Whether Hitler’s criminality will still be as vivid in memory the more he is satirized remains to be seen. The popularity of “Er Ist Wieder Da” among German readers reflects a desire to temper Nazism’s horror with humor. Whether the same holds true for Anglo-American readers will be evident the later part of next year, when the novel appears in English translation.

Gavriel Rosenfeld is a professor of history at Fairfield University and is the author of “The World Hitler Never Made: Alternate History and the Memory of Nazism” (Cambridge University Press, 2005). book on the normalization of Nazism in contemporary culture.