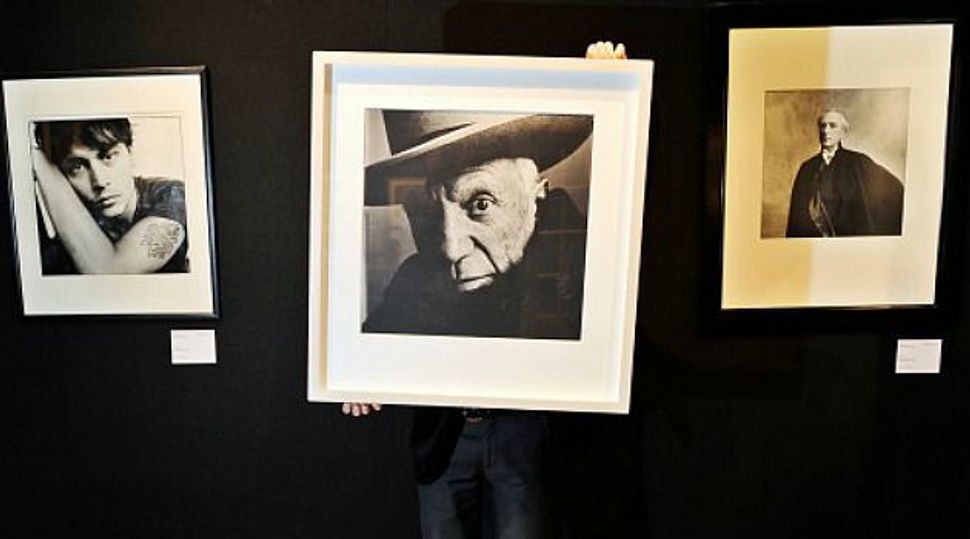 Picturing Pablo: A photograph of Pablo Picasso by Irving Penn, some of whose work is on display at the Art Institute of Chicago in ?Underfoot (1999-2001)? Image by Getty Images

One can often differentiate between New Yorkers and tourists — or “out-of-towners” — based on the trajectory of their gazes; visitors, no doubt dazzled by the soaring skyline, walk around with their eyes fixed on the tops of the skyscrapers. Natives, meanwhile, navigate their way through the obstacle course of slow foot-traffic with their eyes on the sidewalk. But even those whose field of vision is fixed to their feet are unlikely to give the bric-a-brac littering the sidewalks more than a cursory glance.

That’s why Irving Penn’s photographic series depicting gum caked to the pavement and discarded matches and cigarettes offers such a unique perspective on urban life.

The 36 photos in the series “Underfoot” (1999–2001), which are on view at the Art Institute of Chicago as part of “Irving Penn: Underfoot,” portray larger-than-life litter. Matches resemble two-by-fours, and gum reads, at times, as faces, skulls or brains. Most of the “faces” are centered on the page, but some have more exciting compositions.

Some “portraits” appear to smirk; one seems to stick out its tongue; another winks. One could even double as a profile view of a pig, while others look like scarier versions of Krang from “Teenage Mutant Ninja Turtles.”

But the series (which is accessible on the Art Institute’s website) is not only about the “positive” space of the gum, the matches and the cigarette butts, but also the “negative” space of the pavement. Penn has so abstracted his forms that the Manhattan streets — which he documented sitting on a stool and extending his medium-format Hasselblad camera nearly to the pavement — are unrecognizable and appear more magical, like night skies with stars. The contrast in the photos, all of which are black and white, is so stark that some of the images resemble crime scene sets from “Dexter,” with what almost looks to be “blood” gushing from human organs.

A museum guard watching over the exhibit was asked if the ghostly images got scary after too long. “No, Sir,” he said, noting that he and his colleagues rotate rooms every 30 minutes. “It’s strange, but it’s [just] gum.”

Born in 1917 in Plainfield, N.J., to Jewish parents, Penn started photographing for Vogue in 1943. When Penn died, in 2009, his obituaries hailed him as a renowned fashion and celebrity photographer, but although they shared part of his biography — that his father was a watchmaker and his mother a nurse, for example — they didn’t mention his faith. The Guardian, The Independent and The Times, all of them British papers, didn’t mention that he was Jewish, though when his brother, director Arthur Penn, died the following year, all three mentioned that he was. Perhaps Arthur Penn earned the Jewish accolade for his direction of the play “Golda,” about Golda Meir, although that play’s failure led to a messy correction to his New York Times obituary. Encyclopedia Britannica doesn’t even mention that Irving Penn was Jewish.

The closest thing to an affirmative discussion of Penn’s religious identity in the press comes from a February 6, 2010, article in The Times of London by fellow Vogue photographer David Bailey, who claims to have been the only photographer permitted to use Penn’s studio. “He was modest, not pompous, and he had that dry New York Jewish humour,” Bailey writes.

A dry New York Jewish sense of humor might have been at play when Penn set his lens at an angle that ignored clouds, buildings and pedestrians, and focused instead on the discarded trash. The decision to pursue traces or shadows of human figures evokes works of many other artists, including Picasso’s near obsession with acrobats and circus performers who were not performing. Just as Picasso was fascinated by what happened during the set-up and cleanup before and after the circus performance, Penn found beauty (and menacing suggestions of a darker nature) in human traces.

Evidently, Penn’s close-ups of ground-level human trails made an impression on one viewer. Outside the gallery, someone had trudged through a recent Chicago snow dusting. But the footprints, which had been carefully choreographed, offered a more optimistic (and more environmentally sound) perspective than the litter that caught the photographer’s eye: They formed the shape of a heart.

Menachem Wecker, who is based in Chicago, blogs on faith and art topics at blog.chron.com/iconia and chicagonow.com/chicago-theology-art/.