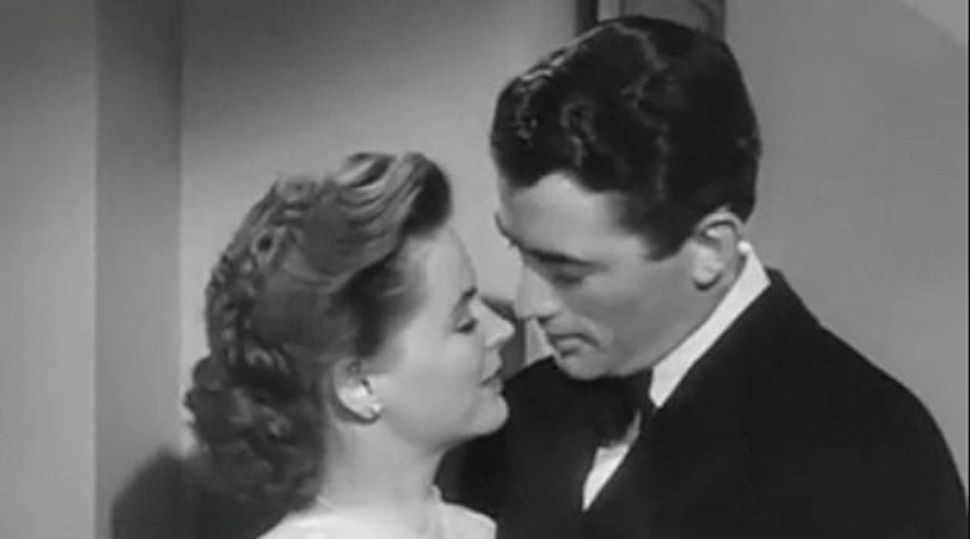 Converting The Academy: Celeste Holm won the 1948 Academy Award for her role in ?Gentleman?s Agreement.? Image by youtube

Sixty-five years ago, in 1948, when the cinematic version of her story, “Gentleman’s Agreement,” received the Oscar for best picture, Laura Z. Hobson was a 47-year-old, divorced, Jewish single mother living in Manhattan. The success of “Gentleman’s Agreement,” which was serialized in Cosmopolitan in 1946, published by Simon & Schuster in 1947 and produced as a film by 20th Century Fox later that year, had made Hobson into a wealthy and famous woman.

She wrote eight more books, found a Fifth Avenue apartment overlooking Central Park, accoutered herself at Bergdorf Goodman and sent her boys off to Exeter and Harvard, respectively, at a time when doing so belied the notion of the most damaging of “gentleman’s agreements.”

“Gentleman’s Agreement” told the story of a non-Jewish reporter, Phil Green, who pretends to be Jewish in order to investigate anti-Semitism. That someone as all-American as Green, played by Gregory Peck, succeeded in masquerading as a Jew was the story’s feel-good premise. It was a twist on the traditional “passing” story, and it implied that Jews, finally, really were just like Christians.

Throughout her life, Hobson attracted people seeking to move beyond the categories and labels imposed on them by birth. Many years later, and before his own passing story became public, literary critic Anatole Broyard wrote admiringly of Hobson’s life and work in a New York Times review of her autobiography.

In 1944, when Hobson first floated her idea to her publisher, Richard Simon of Simon & Schuster, he objected. “Readers will not believe that a gentile would pose as a Jew,” he said. A Jewish New Yorker and a graduate of both the Ethical Culture Fieldston School and Columbia University, Simon could not fathom a world in which a non-Jew would willingly assume a Jewish identity; it sounded like a fairy tale.

Hollywood, however, grabbed up Hobson’s story even before the novel was published.

“Nothing could have made me more happy than the reviews we received on ‘Gentleman’s Agreement,’” the film’s non-Jewish producer, Darryl Zanuck, cabled to Hobson in November 1947, after the movie’s premiere. “When you consider that we were pioneering in a new field…. It is truly amazing that we have come off as beautifully as we have…. Again, many thanks for writing a wonderful book and giving me an opportunity to bask in a little sunshine.”

Zanuck was lauded for his courage in taking on a subject that made Jewish Hollywood skittish: Laura Z. Hobson was the not-quite-famous author (she had published only one other novel) with a not-quite-Jewish name, to whom readers and movie viewers wrote, inquiring coyly: Are you a Jewess?

Did it matter? Hobson thought not, and she chided her fans for suggesting otherwise. What had been the point of “Gentleman’s Agreement,” if not that Jews and Christians were capable of the same emotions, behaviors and appearances? (Actually, some walked away with other ideas. Famed writer Ring Lardner Jr. quipped, “The movie’s moral is that you should never be mean to a Jew, because he might turn out to be a gentile.”)

When Phil reveals his true, gentile identity to his aghast secretary, he says: “‘Look, I’m the same guy I’ve been all along. Same face, nose, tweed suit, voice, everything. Only the word ‘Christian’ is different. Someday you’ll believe me about people being people instead of words and labels.’” It was a lovely sentiment, and one that Peck embodied more than a decade later when he played his most famous role — Atticus Finch in “To Kill A Mockingbird.”

In part, readers wanted to know Hobson’s religion better to judge her audacity. The assumption at the time was that it was doubly courageous for a gentile author to take on the fight against anti-Semitism. These readers knew little about the audacity that had already characterized Hobson’s life. They did not know, for instance, that Hobson had put herself through Cornell — a school where neither Kappa Kappa Gamma nor Phi Beta Kappa welcomed a young woman by the name of Zametkin; or that Hobson had been the first woman that Henry Luce hired at Time to work in a nonsecretarial capacity (Hobson wrote promotional material for Time Inc.).

And what would readers have made of the knowledge that her husband, Francis Thayer Hobson, president of William Morrow, had left Hobson abruptly, after five years of marriage and in the midst of their efforts to conceive a child?

Or that, a few years later, Hobson made a solo trip out to the same Evanston, Ill., adoption agency to which Al Jolson, Bob Hope and Donna Reed turned in order to adopt her first son? Or that she gave birth, in her early 40s, to her second son, choosing not to tell the father, with whom she’d had a dalliance?

What was bolder — but really, very typically Laura Hobson — was her staging, with the help of a few close friends, of a fake adoption so that her older, adopted son might feel none of the pain of being different or lesser.

Was there anything to which Hobson was more sensitive than that pain that came with feeling different? It’s unlikely. It had been stamped onto her earliest memories of being Laura Zametkin of the Jamaica section of Queens, daughter of Russian Jewish radicals Michael Zametkin, an editor at the Forverts and Adella Kean, a columnist at Der Tog. At the time of the 1911 fire at the Triangle Shirtwaist Factory, Laura’s parents draped their house in black bunting.

There were ways, however, of moving beyond that history; even the troublesome last name could be surmounted. Contemporary women may feel that by keeping a maiden name, they are holding on to an identity or publicly declaring spousal equality, but Hobson had always done things in her own inimitable way, and assuming the surname of her Greenwich Village live-in boyfriend, Tom Mount, was her choice. “Laura Mount” had a nice ring to it, the young writer decided, and so her first New Yorker story — a subtle treatment of anti-Semitism in polite society — appeared under that byline in 1932.

Later, her husband, provided another suitable option. This time, his wife tucked her Z in the middle. “The Z is for Zametkin, my maiden name,” she wrote in the first lines of her 1983 autobiography, “and I have clung to it through all my years, because it held my identity in tact before that Anglo-Saxon married name of Hobson.”

Hobson’s decision to write a novel about American anti-Semitism was more daring than it may seem today. When, in February 1944, she read an article in Time magazine about Mississippi Rep. John Rankin calling Walter Winchell a “kike,” Hobson was outraged, and even more outraged to read that nobody in the House of Representatives had protested. Hobson kept the clipping in her scrapbook, which is now housed in the Columbia University archives with the rest of her papers. She wrote about the Rankin episode in her first draft of “Gentleman’s Agreement.”

Hobson’s friend Dorothy Thompson, “the first lady of American journalism” and the first American journalist expelled from Nazi Germany, remained skeptical that writing a novel about anti-Semitism was the proper way to fight the problem. Furthermore, it seemed a shame to Thompson that Hobson was not planning to write about the actual experience of being a Jew, but instead only about someone pretending to be Jewish. After reading the synopsis that Hobson had mailed her, Thompson wrote back. Though she had known few Jews when she was growing up in a Puritan, Anglo-Saxon community, she said she could “vividly remember that my first impression of Jewish homes was that the kids had a hell of a lot better time in them than we did… I also thought that they ate marvelous and vastly more interesting food!” Might not Hobson add a little of that ethnic-religious flavoring to her novel? She demurred; that wasn’t really her thing.

Simon was less interested in a more Jewish book than he was in a book that sold. Throughout 1944, he and Hobson corresponded about the possibilities for a novel about anti-Semitism. He was not enthusiastic. Sales for Hobson’s first novel, “The Trespassers” — a story of Nazi refugees — had been less than stellar. “I do think the cards are stacked terribly against this project,” he warned Hobson.

“Dick, let’s skip it for now,” she wrote back, not quite dismissing Simon’s four-page letter that had outlined “heartbreak possibilities” for Hobson if she went forward with her novel. Why not simply return to advertising and a reliable salary and “security for my boys if I am going to give up a book merely because it might bring me heartbreak? Because I can’t see what the hell is the use of enduring the chancy insecurity of being an author unless you write stuff that you yourself find a deep satisfying rightness in.”

“Maybe this is not the book,” Hobson wrote. “Maybe it will smell ‘tract’ to high heaven.” If so, Hobson promised, she’d give it up, “because it’s no satisfaction to keep writing a lousy tracty book.” Still, she wouldn’t know “unless I try about six chapters…. Maybe those first chapters would be so different from what you expect, so fascinating and interesting, that you will yourself urge me to go on.”

In the end, what had once seemed a fantastic idea — that a gentile would pose as a Jew and fight anti-Semitism — was so convincingly told that it now seems banal.

Watching “Gentleman’s Agreement,” today, it is hard to make out what had seemed so path-breaking about Peck’s character declaring himself a Jew, as though words themselves — the names we call ourselves and the stories we tell about ourselves — have the power to create new realities. But that was the triumph of Hobson’s story: It had become part of America’s story, complete with a Hollywood ending.

Rachel Gordan is a postdoctoral fellow in American Judaism at Northwestern University.