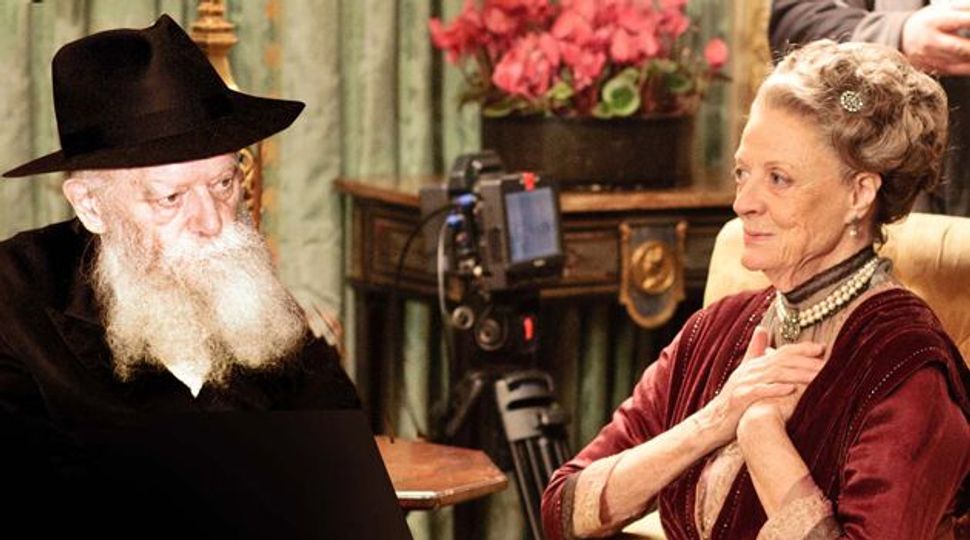 “We had no idea ‘Downton’ would take off as it did,” marvels Julian Fellowes, executive producer and creator of “Downton Abbey,” while taking a rare break from filming on location at Highclere Castle. Relaxing in a yellow damask armchair with a cup of PG Tips, Fellowes can’t help but marvel at his good fortune. His tony British soap, chronicling the lives and loves of a privileged British household at the turn of the century, has become an international sensation, inspiring “Downton” viewing parties, where rabid fans speak in plummy aphorisms, eat foods from the time period, and dress like their favorite characters.

Now fans will have a new character to dress up as: Rebbe Judah Heschel.

Sure enough, Fellowes’ plan for Season Four promises to shake up life at Downton more than ever. In the highly anticipated premiere — spoiler alert! — Lord Grantham realizes that, since the death of heir apparent, Cousin Matthew, in a cross-country skiing accident/cannibal attack, the only way to preserve Downton is to rent out the drawing room to an itinerant band of yeshiva students and their obstreperous leader, Rebbe Judah Heschel. Tensions ensue! When Heschel insists on having both fleyshik and milkhik kitchens, Mrs. Patmore, the irascible cook, flies into a flustered rage. “I can ‘andle ‘im not lettin’ me use the ovens on Shabbos all right, but if I tell Lady Grantham I can’t be makin’ ‘er baby kid seethed in its mother’s milk no more, she’ll ‘ave me ‘ead!” And fans who have long been waiting for Thomas, the scheming servant, to get his due, will be pleased to see the Rebbe pluck his ever-present cigarette from his mouth, proclaiming, “You’ve been a mamzer for three seasons, already. Genug shoyn!”

“Bringing a Rebbe to Downton just seemed right,” muses Fellowes, winding himself in a tasseled cashmere throw. “It was an opportunity to show a sympathetic Jewish character, at a time when anti-Semitism was still socially acceptable in England.” Producer Nigel Lord has nothing but praise for veteran character actor Edmond Carlyle, whose nuanced performance brings Heschel to life. “Carlyle,” Lord says with admiration, “brings you the authentic kvetching and shrugging the part requires, without any of the inconveniences involved in having an actual Jew on set”.

The new season of “Downton Rebbe” is a triumph. Moments of poignancy and passion abound, from the moment Lady Mary insists that Anna refer to her bath as a “claw-footed mikveh,” to the quiet but firm resolve with which Rebbe Heschel persuades Lord Grantham that he must not only accept Sibyl’s baby, but also attend his pidyon ha’ben. And I defy anyone to hold back tears when Carson dresses a bar mitzvah boy in his tallis for the very first time.

Of course, the show’s most delicious zingers are reserved for Maggie Smith, as the Dowager Countess, and she is in rare form. “My word,” she marvels at the Rebbe’s Sunday morning Flower Show and Kiddush, “I can’t imagine what will be worse: the Blitz or these blintzes.” But Rebbe Heschel won’t let her have the last word. “Upstairs, downstairs,” he shrugs, “they’re all goyim to me.”

Gail Lerner is a mild-mannered writer in Los Angeles, who occasionally likes to get her Vashti on.