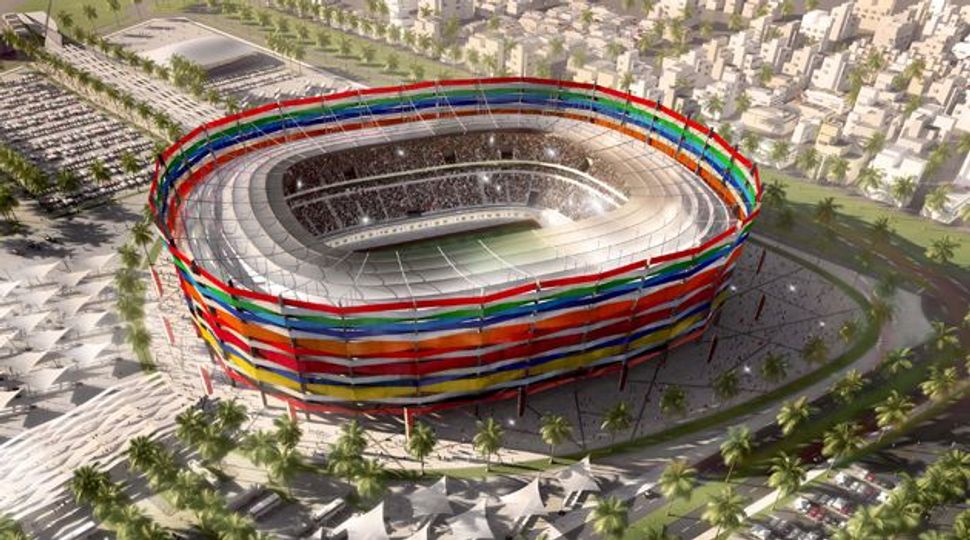 Desert Oasis: An artist?s impression of what trees could look like if Qatar?s stadium surroundings could maintain them. Image by courtesy of the road map to qatar

From the world of sport comes a message of hope. The Emir of Qatar has announced that after his country hosts the FIFA soccer world cup in 2022, he will donate the stadiums and related transportation infrastructure to the Palestinian people to form a non-contiguous state on the Arabian peninsula.

“For the refugees across the Arab world, and those Palestinians still within reach of the Zionist entity that is hosting the European Under-21 soccer competition this summer, these 12 air-conditioned stadia will provide a most comfortable Arab state,” the Emir proclaimed.

Sepp Blatter, president of FIFA, welcomed the move. When asked what had attracted him to the fabulously wealthy desert Emirate of Qatar, which has billions of oil dollars to spare, he talked about the Qatari tradition of hospitality and his hope that FIFA could help level the geopolitical playing field.

But the field may be a hot one. Given that the average daytime temperature in the Qatari summer is around 120 degrees, the cooling systems will remain vital — though the foreign workers who will build the stadiums over the next decade will have shown that it is possible to work without such comforts.

An unofficial spokesman for the Palestinian Authority said that they were concerned about Qatari discrimination against foreigners, but if Qataris could hold a successful World Cup in a country where alcohol was illegal, he was sure that they could solve any problem.

“After all,” he said, “sitting in these plush seats beats sitting in Gaza City. And, even though we will need to show passes to enter or exit, we prefer Muslims on the turnstiles to Jewish soldiers at checkpoints.”

In a surprise move, Israeli nationalist politician Naftali Bennett claimed that two of the stadiums were part of Greater Israel and had been promised by God to the Jews. Leaked documents suggest that Jews in the West Bank are scheming to impersonate Manchester United supporters as cover for their plan to rush the field and plant settlements after the final game at Al Rayyan Stadium.

Whoever ends up occupying the grounds will inherit lightly used locations. At 800,000 people, their planned combined capacity is around half of the population of Qatar. When the country hosted the Asian Cup in 2011, the average crowd was under 13,000.

So the Qataris’ offer is generous. And even if they are not helping the Palestinians make the desert bloom, at least they are ready to offer a state built on sand.