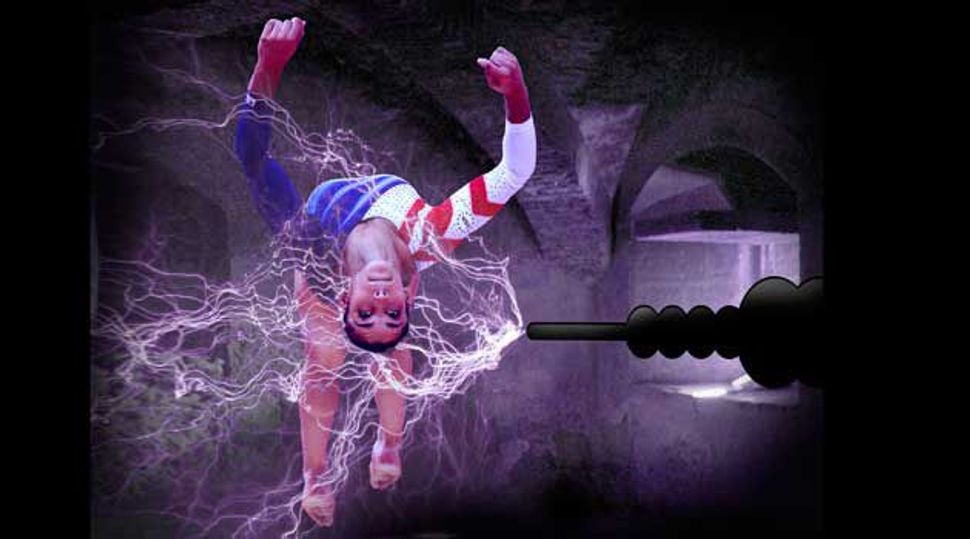 Sparky: The power of Raisman?s Olympic performance came from a series of 1.21 gigawatt infusions at Boston?s Electric Jew Laboratory. Image by courtesy of the institute for institutional institutions

Aly Raisman, the young gymnast who won hearts around the world with her gold medal floor routine set to “Hava Nagila,” is actually the product of the top-secret Aleph Project, a multi-year scientific effort to develop a Jewish sports icon for the 21st century.

The Backward has learned that the very qualities that propelled Raisman to success — her choice of gymnastics, her All-American upbringing in a Boston suburb, her girl-next-door smile, her poise under pressure, and her powerful thighs and buttocks — are the result of extensive field research and laboratory testing, all with the express purpose of producing a sporting celebrity who could instill pride and envy in young American Jews.

Dr. Melvin Goldstein, a professor of genetics and cell biology at Harvard University, has been revealed as the project leader. After evading phone calls, Goldstein was found in a windy Fenway Park, watching the Boston Red Sox practice with misty eyes. “We haven’t had a top-notch Jewish sports celebrity since the days of Sandy Koufax, or maybe Mark Spitz,” he said. “And let’s face it, you’re not gonna get a Jewish Mary Lou Retton the natural way. So we pulled together a great team of scientists and built Project Aleph — or Aly, as the world knows her.”

Goldstein added with a chuckle, “Some of our team members thought we were tipping our hand a little by choosing Hava Nagila for the floor routine — but hey, it worked!”

Although the effort cost millions of dollars, project officials said they expect to recoup the expenses by loaning out Raisman, 18, for fundraisers.