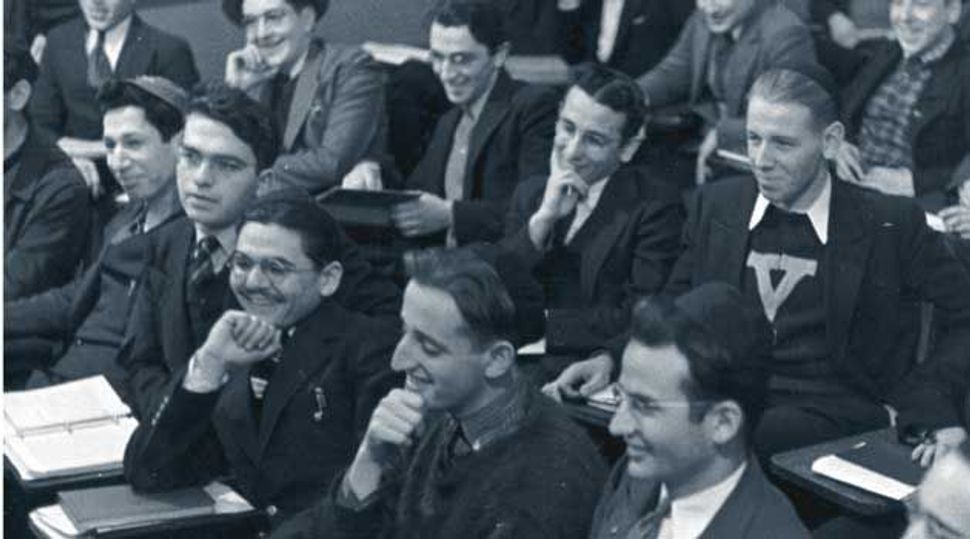 Why Yale? A 1913 experiment to chemically convert Yale?s freshman class into Jews failed when hormones caused increasing numbers of students? hands to stick to their chins. Image by Backward Association

1913 Backward editor Babe Kahan returned from a month-long trip to Europe, during which he visited those “bastions of peaceful civilization” France and Germany, as well as the “delightful” Balkan countries of Serbia and Montenegro. In each community Kahan visited, Yiddish speakers discussed the growing influence of their language on the pan-European movements that were bringing countries ever closer. They cited Esperanto as the biggest threat to the future, but felt confident that this would be the Jewish century.

1938 American Jewish leader, Dennis Mendel, condemned Germany’s National Socialist German Workers’ Party for launching a new line of Hitler memorabilia ahead of a rally in Nuremberg. A Nazi spokesman said that the “Get Fuhrious. Get Anschluss” mugs, T-shirts and key rings, were meant to promote the recent annexation of Austria by Germany. But Mendel called the use of images of Hitler a “deplorable marketing ploy” and a trivialization of the forthcoming Holocaust. “There can never be any justification for using the images of Hitler, SS guards or any other depiction of the Nazi killing machine to promote products or services,” Mendel said. Nazi officials hurried to deny reports of a wave of systematic murder that they insist will not happen over the next six years.

1963 The Milwaukee JCC is finding itself in hot water over a staging of Zionist visionary Theodor Herzl’s 1891 comedy “Prinzen aus Genieland,” (“Princes in Genius-land”) after key donors withdrew from the event, citing Herzl’s “insufficiently enthusiastic” support of the State of Israel. “I’m just not convinced that he is truly supportive enough,” said one donor, noting passages in Herzl’s “Altneuland” complaining about the weather in Palestine. After the play’s producer pointed out that Herzl is widely regarded as the founder of the Zionist enterprise and the inspiration for the Jewish State itself, the donor responded, “Nope – still not enough.”