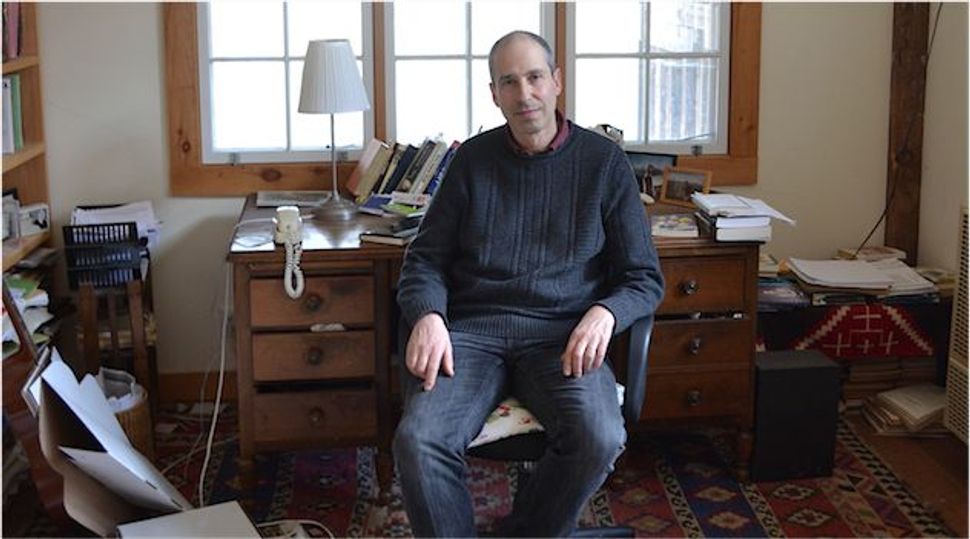 Give Me Everything You Have: On Being Stalked
By James Lasdun
Farrar, Straus and Giroux, 224 pages, $25

A small boy flees across a bridge. Assassins follow, begging for a taste of his blood to eat with dessert: “to top off the honey.” Eventually, the boy surrenders his head, submitting to his beheaders’ crazed illogic: This is what he owes them.

Fans of Israeli poet Yona Wallach (1944–1985) will recognize the plot from her famed poem “Yonatan,” which evokes a host of Jewish tragedies. While he doesn’t cite the poem in his new book, Jewish writer and teacher James Lasdun revisits its scene of being chased by a raging force, but this time one armed with cyber power, not swords. He explores being harassed by a former student whose writing he championed — a Muslim woman who makes anti-Semitism her weapon of choice and the Internet her battlefront — in his dark, literate and startlingly compassionate memoir, “Give Me Everything You Have: On Being Stalked.”

How one becomes a lightning rod for hate — and its inverse: obsessed love — drives his inquiry into his own psyche, and that of his stalker. Lasdun is the author of 12 books, including gothic poetry and fiction (“Landscape With Chainsaw,” “The Horned Man”) and travel guides (“Walking and Eating in Provence,” co-written by his wife, Pia Davis).

Politically, his sympathy tends toward Palestinians. Consequently, he perceives his situation’s oddness: “I am not a supporter of Israel’s military policy, let alone any kind of Zionist,” he writes, “so it was very strange to find myself cast suddenly as some kind of would-be silencer of Arabs.” He’s referring here to canards circulated online by his stalker, accusing him of, among other things, leading a Jewish cabal to steal her ideas and plot her rape.

Her grandiosity would be laughable if it didn’t smack of nightmare. Yet how Lasdun first encounters the Iranian-born Nasreen (his pseudonym for her, meaning “white rose”) fits the dream of many literary aspirants: She takes his writing course. After reading two chapters of her debut novel, set in Tehran, he recommends her to his agent.

Lasdun’s sense of Nasreen’s talent seems real, but he knows little about her. Her reserve in class he attributes to quiet self-confidence; her sallow complexion, he thinks, mirrors his own; her talk of a fiancé “accorded with my sense of her as a writer,” he says.

And so it begins. Nasreen emails him for advice on revisions to her novel, one deemed promising by his agent but not yet publishable. In turn, he asks her sociology questions: What is it like to be Muslim in post-9/11 New York? As a practitioner of Islam, what does she think of veils?

“Would you like to see me in a veil, sir?” she asks. It is one of the early warning signs of her taste for trespass that Lasdun uncomfortably ignores. He tries to help her book, even as she pushes for romance. Yet he feels he can’t cut her off. At best, she shows poor judgment: She launches an affair with a co-worker, gets mutually accused of sexual harassment, gets fired, and then sues her employer for race and gender discrimination — all of which she giddily reveals to Lasdun online, even copying him on email discussions of the case with her lawyer. “I want this to be a circus,” she writes.

A slippage of character — or sanity — seems clear. So why doesn’t he protect himself sooner? Why does he only politely reject her “unstoppably amorous” salvos? Part of the answer lies with human loneliness: “The interesting writerly friendship I had thought I was embarking on had clearly been a figment of my imagination,” he mourns, “and I felt mocked by my own naïveté.” But there’s another factor at work: a sense of having to prove — or disprove — what? His own goodness. “I didn’t see how I could refuse to read the revisions she’d made to her novel, since I was so implicated, by now, in the book’s existence,” he writes murkily at one point. But how, and by whom, he doesn’t say.

Readers of Lasdun’s fiction know what must follow: The hero gets cast out. Ambiguity leads to grotesquerie or ruin. If this memoir tracks his creative themes closely, it’s because in the author’s life — as in his writing — idealization occurs, and too soon. Then, his outsider’s fear kicks in, and prevents escape: “I can’t help feeling there was something hard about it; that if I were a person in a novel, it would show as a significant character flaw,” he says, worried at the thought of not answering Nasreen at all.

Nasreen takes her fury worldwide, firing off emails to Lasdun’s employers, accusing him of sexual misconduct and alleging on websites that his writing is “racist and horribly frightening.” For him, this is not just upsetting, but startling, too: “Here I was, a standard-issue liberal with unimpeachably correct views on everything, casting the shadow of some leering, reactionary bigot.” But like a cracked prism, Nasreen refracts back to him torqued images of his sense of rightness, his notions of the world, and his picture of how Jews appear to others.

As part of his memoir’s research, and his quest to understand Nasreen — is she mentally ill or in control of herself? — he heads for Jerusalem. There he observes Haredim praying at the Western Wall, each dressed in 18th-century regalia: fur hat, long black coat and a black leather box “strapped to the center of a man’s forehead, like a miner’s lamp, shedding invisible light.” To secular co-religionists and uninformed outsiders alike, it is, he writes, an “unassimilable” sight. Fair enough. But the garb of other faiths passes without similar comment, Lasdun merely noting on his walk through the Arab Quarter that “[r]obed men, women in headscarves, groups of small children, moved along the narrow street.”

To be clear, at no point in this memoir does he harshly seek to indict others. Overwhelmingly, he is hardest on himself. In the end, his support for Nasreen’s writing was noble: He thought that both it and she were deserving. He was wrong about the latter. Still, as this gripping book shows, in the face of a hounding rage, one can begin to entertain a pursuer’s violent claims, and to wonder (here, advisably so), “Is there something about myself that I simply don’t see?”

Susan Comninos is a frequent contributor to the Forward. Her journalism most recently appeared in The Boston Globe and the Christian Science Monitor. She lives in New York.