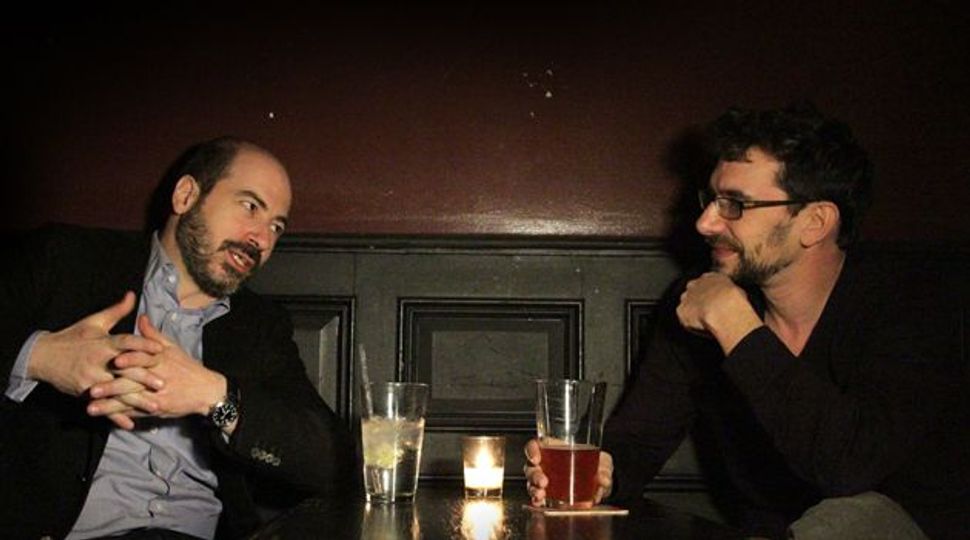 The Old Bunch: Joshua Furst and Ben Schrank make themselves at home in Brooklyn. Image by nate lavey

Ben Schrank and author and frequent Forward contributor Joshua Furst met up at The Brooklyn Inn with the intention of drinking some beer and discussing fiction, Brooklyn and their complicated relationships with Jewishness. Schrank recently published his wise, big-hearted new novel, “Love Is a Canoe.” Since much of the story revolves around publishing and the role that books play in our lives — and large portions of it take place in Brooklyn — the time seemed right to bring these two friends together to discuss these issues. As is their way, the men leaped right in, as though their conversation had been going on for hours.

Joshua Furst: He said he was a regional writer, and his region happens to be made up of Jews.

If Philip Roth is a regional writer, then we are all regional writers. I identify, shamefacedly, as a Brooklyn writer whether I like that definition or not.

I consider you to be a Brooklyn writer. But of a more authentic Brooklyn than the one we seem to be living in now.

Well, historically, being from cultural Brooklyn is the same as being culturally Jewish. I grew up in Brooklyn, so I have to self-identify as someone who grew up in a series of neighborhoods that were bedroom communities to Manhattan, and that’s really what they were — these self-created communities.

Primarily liberal self-created communities. I would identify as culturally liberal and culturally Jewish and familiar with, you know, Leonard Michaels’s “Men’s Club.” My father was in a men’s club in 1972, 3, 4, and I must have derived my identity from that existence. Secondarily, its relationship to being Jewish and having proximity to a world center like New York. If you grow up in a place and never leave it, you become doubly identified with that place.

Do you identify with the new literary Brooklyn, the Brooklyn of Jhumpa Lahiri and Jonathan Lethem?

I am happy to know of that Brooklyn, but I don’t think I can identify with it. Although, Lethem grew up on Dean Street and so did I. But do you get to identify as what you want to be or as what you are and who identifies you?

Do you think it’s even possible anymore to identify as a nonreligious, culturally Jewish writer? Is that a thing anymore?

Maybe the question, if you identify as a thing and no one cares, then you can’t wear that identity. A Jewish writer as I understand it is someone who writes about Jewish concerns, primarily for a Jewish audience. Which is a fine thing, but no, I don’t think that anybody would allow me to wear the title of Jewish writer.

See, I want to disagree with that. Because all of the Jewish writers I cherish most wrote primarily toward the outside world. They weren’t recycling the same Jewish themes in order to feed their Jewish constituency this myth of Judaism. Norman Mailer was trying to eat the entire world.

But he’s a second-generation Jewish American. And I’m pretty sure I’m fourth- or fifth-generation American. I used to call myself an Eastern bloc European Jew. That upset my mother, who’s like, “I don’t know how you can say that if your family’s been here over a hundred some odd years.”

But you identify as Jewish.

So what is that identification now? For someone who isn’t necessarily religious?

The reason I identify as Jewish is because I wouldn’t want anyone to think I would discard a piece of my identity. The only reason I identify as Jewish is as a kind of a chip and to keep that chip on my shoulder. The people who discard that chip are people who, I think, don’t really understand their history as Jews, cultural, religious or otherwise. It’s a sin or a bad thing to negate your history. But I’ve had people refuse to identify me as culturally Jewish.

I have, too! Frequently. I’m not a religious Jew, but I deeply, deeply identify as culturally Jewish. And I want to say that there are cultural traits beyond the religion that are identifiably Jewish.

Yeah, and they used to be “funny,” and now that has kind of sloughed off a little bit. I don’t think that Louis CK is Jewish, and yet he has a kind of a temperamentally Jewish humor that a sophisticated cultural Jew understands. I talked to somebody — a big person in publishing — abou tthis. If you believe you exist on the edge of a knife and at any moment they’re going to come and get you and tear your house down and kill your family and make you work at a camp — you know if you believe that’s just a hair’s breadth away — is that paranoia writ large or is that identifying as a cultural Jew?

Is there really a difference between paranoia writ large and being a cultural Jew? I feel like my most identifying feature is my paranoia. And it’s my most Jewish feature.

Right. And you wouldn’t want anybody to take that away.

No! I’m very proud of my paranoia.

I don’t know how I feel about my paranoia. But knowing that you’ll always have to exist at the favor of a larger culture that could, in a moment, destroy you and everything you’ve ever loved or cared for is probably an inherited Jewish trait. Not biologically, but temperamentally. Some Jews don’t feel that way.

I guess it’s conceivable that there are some Jews who don’t feel that way. I haven’t ever met one, but —

They get old and feel secure. But as a fiction writer, I think you’d agree that feeling secure is death to your work.

Feeling secure is so far away from my experience of the world that I can’t even imagine what that is.

But you’d agree that it’s not good for your work.

It’s not good for your work, no. And it’s an inherent lie of the human condition.

But it’s never true. I feel like my life is one giant problem.

If you’re a culturally Jewish writer, what else goes on the writer medal you wear on your chest?

Besides Jewishness? A certain kind of pessimism that could be considered an element of Jewishness, and a dualism between this Midwesternism and this New Yorkism. When I’m in the Midwest, everybody thinks I’m the most New York person they’ve ever met, and when I’m in New York, I feel very much tied to the Midwest.

See, this is how I feel a kinship with Jewishness. There’s a kind of reasoning of thought, a lawyerly demeanor, that I feel like you and I share. I identify this as being a particularly Jewish way of engaging with the world.

That the work is reasoned and considered?

No, that the work is argued and considered.

But a lot of English writers develop characters who are considered and argued.You look at Martin Amis characters, they’re about —

But Martin Amis wants to be a Jew!

He has historically said that. He would do better if he believed that safety is not an option. I think many immigrant cultures had to create characters who are populist and who are representative of something and are considered.

I don’t mean being considered, like thought through, I mean that there’s something talmudic in the style.

I have this anecdote where a woman who I had met at a conference more than ten years ago emailed me and she said: “I would love to review your book. Does it have Jewish content? If it does, I’ll review it for a Jewish publication; if it doesn’t, I’ll just read it.” So I had to spend some days trying to figure that out. My main character’s mother is Jewish. Her doubt and dubiousness about her own place in the world, and her dislike of the things in herself that she likes, and that revolving duality and doubt, is what makes her, for me, probably, culturally Jewish.

See, I want to reclaim this great tradition of European secular Jews who remade the world in their image.

I would argue that if a Jewish person doesn’t want to identify as culturally Jewish, they needn’t do that. I remember — I’ll never forget — I had a friend in high school who was like, “You’re not culturally Jewish.” He thought he was doing me some favor. And it was a very imprinting moment, because he was dis-identifying me with my culture. If I had embraced this favor, it’s like the ultimate leave taking. There are a lot of mediocre short stories about this. But at the same time, if I was with somebody else who was like, “Yes, I would like to renege on my culture,” I think you’ve got to let them go. It comes back to the Roth quote. Great writers get to disavow their groups and get free. They just become writers.

So, if Roth says that Faulkner is a regional writer and he’s a regional writer, he understands that they’re both universal writers who are free of any constraint you might put on them. So Brooklyn becomes just a kind of a meaningless category for a striving. A fictional striving.

I think that’s a fair problem.