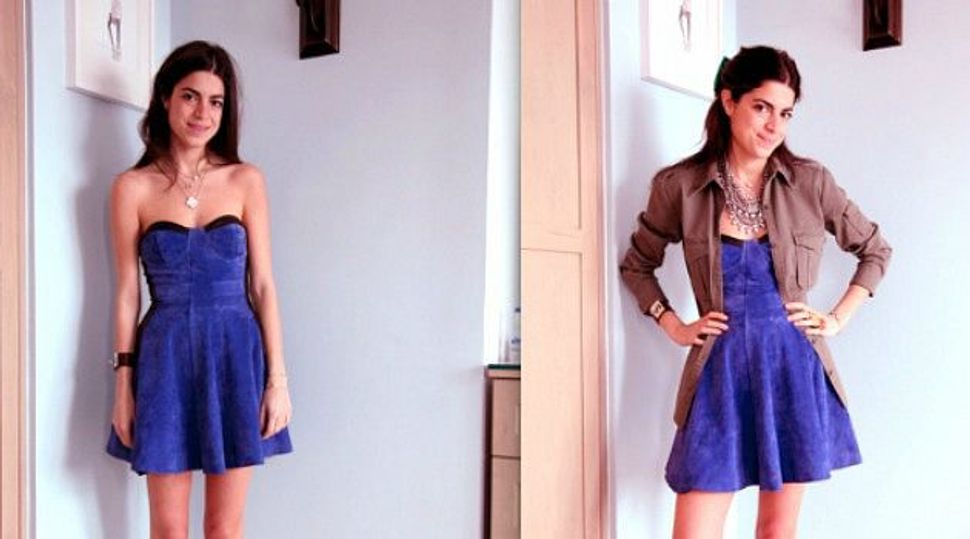 ‘I studied molecular biology and painting, so taking photos and writing about beauty was probably the last thing I ever figured I would do,” Aimee Blaut, 29, tells me of the road she took to founding the popular blog The Formula, a lifestyle site featuring interviews with fashion tastemakers and industry people about their regimens, favorite products and what they think is “in.”

Going from working in labs and performing immunology and neurology research to interviewing and photographing the movers and shakers of the fashion industry isn’t the type of story you hear every day, but as Blaut tells it, it’s really just something that sort of happened. “I’ve always been beauty obsessed, so focusing on that seemed natural. And luckily, someone in my life at the time taught me how to use a camera, and I have been doing it ever since,” she said. Today The Formula is her full-time job, and it has become the go-to source for those interested in what fashion insiders are wearing.

Jews have played a role in every aspect of the American fashion industry since the 19th century, when a wave of European Jews made fortunes opening up department stores in major American cities — from Filene’s in Boston to Goldwater’s in Arizona. In 1853, a German-born Jew named Levi Strauss founded the first company to manufacture blue jeans; immigrants from the shtetl set up custom-made suit shops like J. Press for Ivy League students, captains of industry and Kennedys.

If you needed a Yiddish-speaking tailor in a major city, all you had to do was find the small storefronts or massive factories in Philadelphia, Chicago and New York, where, in 1897, about 60% of the city’s Jewish labor force was employed in the apparel field, and three-fourths of the workers in the industry were Jews.

And today, when there’s a mezuza on nearly every door in New York’s wholesale fabric district, and Jewish designers such as Marc Jacobs and Ralph Lauren are at the helm of billion-dollar brands, it’s apparent that Jews still dominate much of the global market. Now, fashionistas who happen to be Jewish have found yet another comfortable spot in the fashion world: the fashion blog.

Lawrence Schlossman has gained a considerably large following and was thought influential enough to be included in the GQ blog “Oral History of Menswear Blogging” in 2009, after founding the now-renowned menswear blog Sartorially Inclined.

Schlossman took to the popular blogging platform Tumblr to parody the world of bespoke suits and Japanese selvedge denim with a new project, F**k Yeah Menswear. His Tumblr gained notice for its satirical posts that feature the type of well-dressed gentleman you’d expect to see gracing the popular street-style blog The Sartorialist or the pages of a J. Crew catalog, and adds poetry that reads like hip-hop lyrics full of terms that you probably need to be a dedicated follower of fashion to understand, such as “Steez” (style and ease) and “MTM” (made to measure). 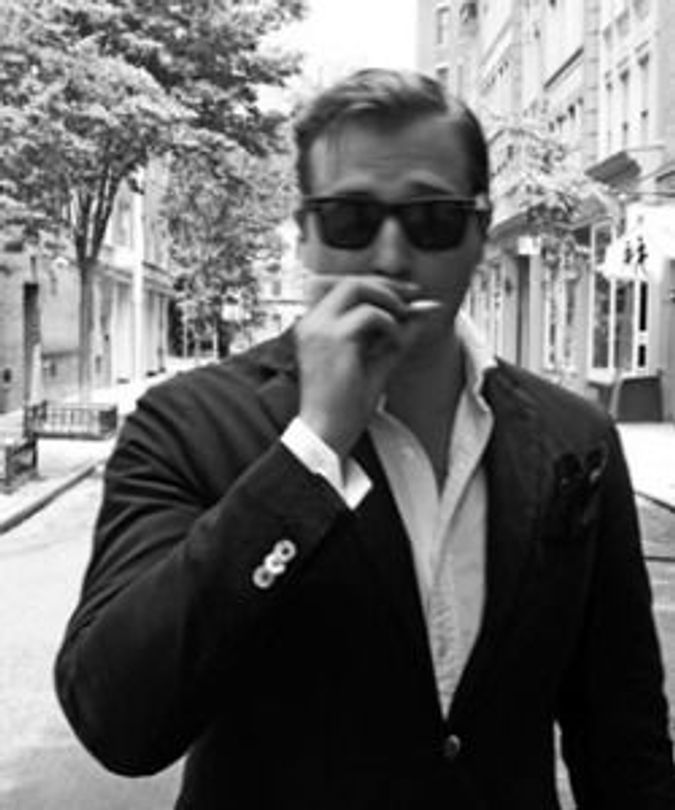 Schlossman and his partner, Kevin Burrows, made their first post in 2010 and posted anonymously until May 2012, when a New York Observer article by Foster Kamer revealed their identities. Their public outing came almost nine months after it had been discovered that the authors had signed a blog-to-book deal (“F**k Yeah Menswear: Bespoke Knowledge for the Crispy Gentleman” is out now), and the two partners finally felt like it was time to go public.

“At first my co-author and myself thought that staying anonymous helped build the self-perpetuating mythology that quickly developed around the blog, its voice and whoever it was that was behind it,” Schlossman told me via email. He and Burrows realized that going public would be a “major bargaining chip,” but they note that they “tried to hold out as long as we could, for selfish reasons.”

The book, published by Simon & Schuster, is a snapshot of contemporary men’s fashion circa now, but it also shares a lineage with other satirical fashion books, like the best-selling 1980 paperback “The Official Preppy Handbook” (which was also co-written by a Jew, Lisa Birnbach).

Schlossman, 25, is one of the many Jewish bloggers whose do-it-yourself attitude toward blogging helped attract the fashion world’s attention more than any internship could. He is also one of those who are now helping redefine the relationships between those who make fashion and those who wear it.

Tavi Gevinson is the poster child for this trend since gaining worldwide attention in 2009, long before she was legally even allowed to work in the fashion industry (she was only 13), for her blog, Style Rookie, which featured pictures of her daily ensembles (the British newspaper The Daily Mail called her “the new darling of the fashion industry”). She now runs a mini-media empire as editor-in-chief of the popular website Rookie. Leandra Medine started The Man Repeller in 2009 after putting together an outfit that made her think “this would make someone never want to have sex with you again,” she told Jewcy.com in 2010.

It started out as a joke, but in 2012, Medine’s site was named to Time’s 25 Best Blogs, and Elle called her one of the top 10 fashion personalities of the year.

While Jewish fashion darlings are currently making livings off being Internet tastemakers for those who want an idea of what it takes to be stylish, most admit that their interest in dressing well was something that had little to do with their heritage. “Looking at vintage pictures of my father and going through his wardrobe with the discerning eye I have now gives me more of an appreciation than I once had,” Schlossman said. But “I’m not sure I would consider anybody in my family incredibly stylish or fashionable.”

When I pressed Blaut about whether her family has any roots in the garment industry, she replied, “Not at all.” While Blaut and Schlossman’s answers might make it seem like a coincidence that so many of the most popular fashion bloggers on the Internet happen to be Jewish, when these digital trajectories are lined up next to the long and storied history of American Jews and their continued involvement in the world of American fashion, it all seems like part of an ongoing narrative that tells the story of both the American fashion industry and the Jewish American experience.

Mordechai Rubinstein’s journey to menswear fame sounds almost like something out of a Sholem Aleichem story. Growing up Orthodox, Rubinstein decided to forgo a lifetime studying holy books and dishing out talmudic advice for the shmatte business. He has held several jobs in the fashion industry, from public relations maven at Jack Spade to an associate marketing editor position at the short-lived Men’s Vogue.

And since 2008, when he started his blog Mister Mort, Rubinstein has snapped photos all over the globe of those people in the streets whom he deems worthy of his lens. His choice in subjects almost calls to mind the unique characters that Diane Arbus would find interesting, not the perfect cheekbones and slender figures that traditional fashion photographers seek out. Be it an older African-American gentleman with a patchy goatee wearing a bicycle cap, a weathered blue button-up shirt and a pair of chinos, or an emergency medical technician wearing white winter cargos, Rubinstein’s choice in subjects is unique, but so is his ability to transform any of his subjects into a fashion model.

Unlike many of his contemporaries, Rubinstein wears his Jewishness on the sleeve of whatever vintage shirt he’s sporting; his Twitter account is constantly full of pictures of stylish Hasidim, heavy use of “Oy” as a hashtag and even an Instagram photo from his sister’s Hanukkah party. One post featured a photography subject taking his fashion inspiration from the Hasidic men of Brooklyn’s Williamsburg. Rubinstein’s reaction: “Gevalt! Egad! First thing that came to mind when I saw Isadore with his fedora and black-and-white get-up, I was immediately taken back to my yeshiva days when walking around town. A bokhur [a yeshiva student] had to have his hat and jacket on or else!”

Jason Diamond is the founder of Vol. 1 Brooklyn and deputy editor of Flavorpill.