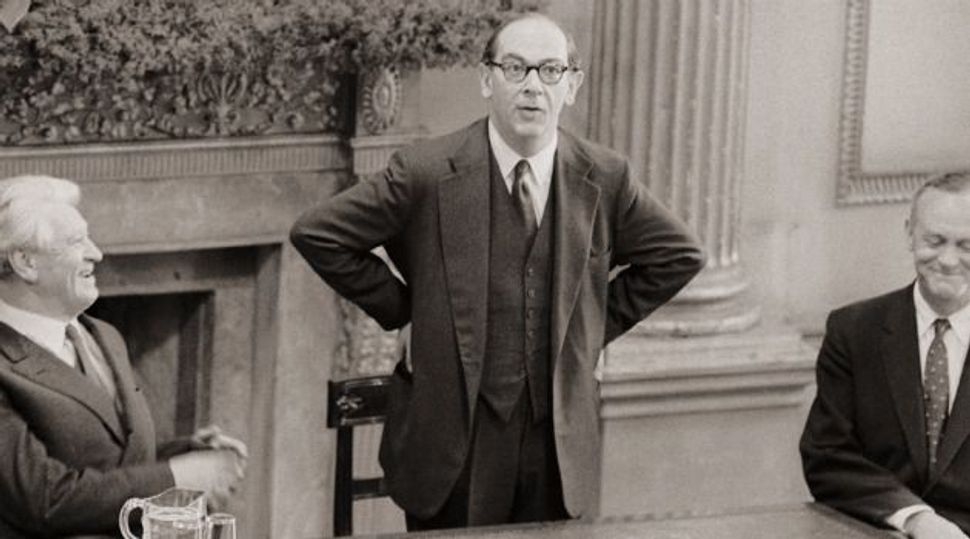 Was He A Fox Or A Hedgehog?: Isaiah Berlin, seen here in 1959, debates the finer points of human behavior. Image by Getty Images

‘The fox knows many things, but the hedgehog knows one big thing.” Rarely have so few words — a fragment of poetry from the sixth-century Greek poet Archilochus — come to mean so much. Sixty years ago, with the publication of his essay “The Hedgehog and the Fox,” Isaiah Berlin yoked these little critters to large symbols. Their tracks lead us not just to the great thinkers Berlin pursued during his life, but also back to this most English of Russian-born intellectuals and his elusive relationship to Judaism.

The subject of Berlin’s essay is Leo Tolstoy’s view of history. But this is too modest. One might as well describe “War and Peace” as a novel about, well, war and peace. Berlin’s subject matter is nothing less than history in all its breathtaking confusion, and our vain efforts to master it.

Enter the hedgehog and the fox. The one relates “everything to a single central vision, one system less or more coherent or articulate, in terms of which they understand, think and feel,” while the other pursues “many ends, often unrelated and even contradictory [and] related by no single moral or aesthetic principle.” Tolstoy, Berlin suggests, was born a fox but desperately wished to be a hedgehog. Tolstoy the novelist fully re-created the flux of history as we live it: “the colors, smells, tastes, sounds and movements, the jealousies, loves, hatreds, passions, the rare flashes of insight, the transforming moments, the ordinary day-to-day succession of private data which constitute all there is.”

Yet behind this vast panorama of human desires and actions, Tolstoy the thinker claimed that there is a single law that wholly determines our lives. Our assumption that we guide our lives and make our decisions as free agents is sheer fantasy. This conviction is underscored in Tolstoy’s memorably brutal portrait of Napoleon, who “acts upon, and has hypnotized others into believing, the assumption that he understands and controls events” when he is in reality a pitiable marionette incapable of mastering his own delusions, much less the march of events. But in the end, it applies to everyone who entertains the same illusion, shielding them from “the spectacle of human impotence and irrelevance.”

Time and again, Tolstoy interrupts his story in order to remind us that each and every event, no matter how small or silly, has been determined by everything that preceded that very moment. Yet each and every character in this epic work, so alive and so real, gives the lie to this claim. That readers loved “War and Peace” for its magical re-creation of the social and inner lives of its characters was, for its creator, a source of despair, for the actions and words of these same characters were the ephemeral “flowers” of life, not the “roots.” As Berlin announces, “No author who has ever lived has shown such powers of insight into the variety of life — the differences, the contrasts, the collisions of persons and things and situations, each apprehended in its absolute uniqueness.”

Tolstoy, in Berlin’s telling, was torn between the hedgehog’s quest for a single truth and the fox’s acceptance of many and, at times, incommensurable truths. He is like a third animal — not one from Archilochus, but instead from the menagerie of Dr. Dolittle: the pushmi-pullyu. One head, fixed as only a monist’s can be, pulls in one direction, while the other head, marveling at the panorama of pluralism, pulls no less mightily in the opposite direction. One half of Tolstoy was at home in a world teeming with many truths, while the other half clambered up the nearest slope, seeking a glimpse of a single truth.

By the end of his life, this tension had become nearly intolerable. Tolstoy could not help but see, and make others see, an infinitely faceted and complex world. But this very ability drove him, if only intellectually, to gouge out his eyes in his pursuit of a purified form of Christianity. In his concluding image, Berlin in fact turns to Oedipus, describing Tolstoy as the “most tragic of the great writers, a desperate old man, beyond human aid, wandering self-blinded at Colonus.”

Berlin’s evocation of Tolstoy’s predicament is as majestic as are the grand and cascading clauses that spill across the essay’s pages. But the regal flow of words on whose surface punctuation floats like buoys makes it difficult to fix Berlin’s location. Where do we find him? Did he cast his lot with the hedgehogs or with the foxes? Both line-ups are star-studded — Plato, Dante, Spinoza and Dostoyevsky for the former, and Aristotle, Shakespeare, Pushkin and Joyce among the latter. Moreover, Berlin always insisted that the teams represent equally valid worldviews.

Yet despite his protestations, Berlin played with the foxes. His landmark essays in political thought, particularly on the notions of negative and positive liberty, as well as his critique of historical determinism, reveal Berlin’s attachment to the values of pluralism. Not only do the variety and density of historical and human experience undermine any effort to reduce them to a solitary truth, he declares, but there is also a variety of ways of attempting to understand those experiences. In his essay “Historical Inevitability,” he is categorical about the wrongheadedness of believing that there is just one legitimate category: “The same facts can be arranged in more than one pattern, seen from several perspectives, displayed in many lights.”

That there exists a single explanation or a sole truth for why the world is the way it is, and why we do what we do, is a deeply compelling claim. Berlin nevertheless believed it to be a siren call we must resist. First, it makes for failed art. When literature trumps theory, we find ourselves in the presence of a Tolstoy; when theory trumps literature, we are left with Ayn Rand. If we cannot imaginatively evoke a worldview, Michael Walzer has noted, perhaps we need to think twice before embracing it as a philosophy. Who better than Tolstoy to remind us of this need? His storytelling, as opposed to his theorizing, reveals with unmatched force that we live our lives with the belief that we are free and that our futures are open-ended.

Much ink has recently been spilled over whether Berlin’s defense of pluralism was rooted in his Jewish background. As Michael Ignatieff has written, not only was Berlin a Jew from Riga — his father, who was a merchant, moved his family to England soon after the Russian Revolution — but he was also a cousin of Menachem Schneerson. While mention of the Lubavitch connection would cause Berlin’s “face to tighten into a rare and uncharacteristic expression of dislike,” Ignatieff emphasized that Jewishness was a “central fact about Berlin.” Though not a practicing Jew, Berlin embraced his Jewish identity. He was an ardent defender of Israel, close friend and valued adviser to Chaim Weizmann, and is the author of the remarkable essay “Jewish Slavery and Emancipation.” In that essay, he takes to task Arthur Koestler’s argument, made soon after Israel’s creation, that Jews had to decide between settling in Israel and settling for complete assimilation elsewhere. The inveterate pluralist replied that there are too many Jews who rightly “do not see life in the form of radical choices between one course and another, and whom we do not condemn for this reason.” Instead, Berlin argued, Israel’s birth freed Jews to be themselves: free to remain a hyphenated Jew, become an Israeli Jew or explore other paths of Jewishness.

Yet Berlin’s most recent biographer, Arie Dubnov, disagrees with those who try to explain Berlin’s thought process by using his Jewishness. This, he believes, smacks of the very reductionism so disliked by Berlin himself. He is not a Jewish philosopher in the sense that, say, Martin Buber is; there is very little in his writing that is explicitly Jewish. Instead, Dubnov argues that Berlin’s thought was shaped by his personal experience — an experience that of course included his Zionist engagement, but so many other events and concerns, as well.

Perhaps most important was Berlin’s experience as a naturalized Englishman. His trajectory from Riga to Oxford was remarkable not just for the intellectual interests he brought with him, but also for the national characteristics he discovered upon arriving: As a writer, conversationalist and thinker, few individuals were more British than Berlin. In “Jewish Slavery and Emancipation,” Berlin weaves a stunning parable to illustrate the plight of modern Jews: Like travelers finding themselves among a strange tribe, they must, in order to survive, study these strangers as carefully as possible. They soon know this tribe better than the tribesmen know themselves — their manners, rituals, beliefs, language — knowledge that not only helps them survive, but also inevitably leads them to develop a natural affection for these strangers. They ultimately “feel at one with the native civilization… prepared not merely to live but to die for it… with greater passion than the natives themselves.”

Of course, it is impossible not to see Berlin’s self-portrait in these lines, no less than a deep, constant, though repressed anxiety over his status: The natives may well admire and grow fond of the strangers, “but their feelings, however benevolent or respectful or fascinated, are, at best, those felt toward strangers.” In this respect, perhaps, Berlin was most deeply Jewish. A fox, to be sure, but a Jewish one.

Robert Zaretsky is a professor of history at the Honors College, University of Houston. His most recent book, “A Life Worth Living: Albert Camus and the Pursuit of Meaning,” will be published this fall by Harvard University Press.