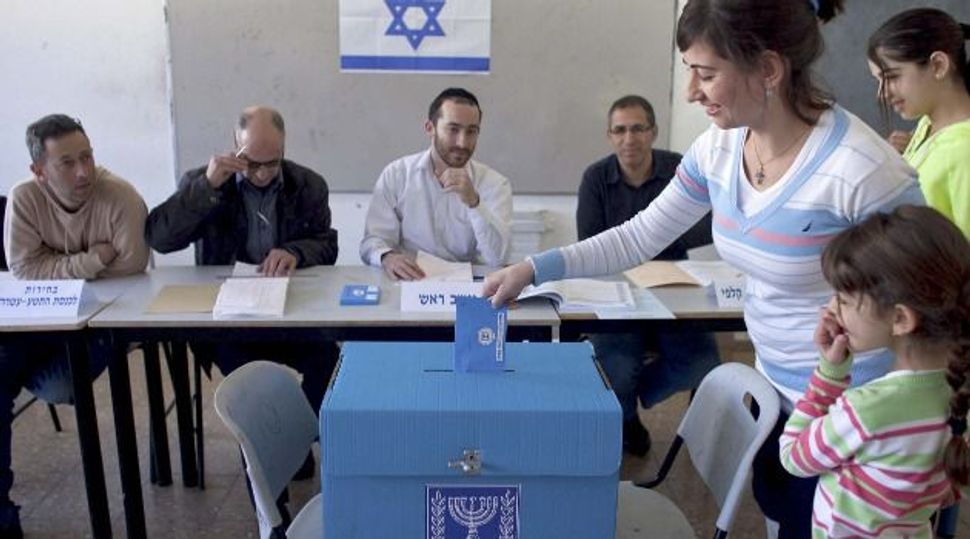 What?s in a Name?: When it comes to political parties in Israel, perhaps far too much. Image by Getty Images

A Forward reader who modestly asks to remain anonymous writes:

“As an American Jew, my sources of information on Israeli politics are from English-language publications, the Forward being one of them. During the recent elections in Israel, I read about the Jewish Home party — and also about the Habayit Hayehudi [“Jewish Home” in Hebrew] party.

This got me to thinking: Why are some Israeli party names translated into English, others are not, and still others sometimes are and sometimes aren’t? The Labor Party is always known by its English name, never as the Ha’avodah party — but in that case, why is the Likud not known as the Solidarity Party? I’m curious to know what your thoughts are.”

Actually, since the Likud ran in the recent elections on a single Knesset list with Yisrael Beiteinu or the Israel Is Our Home party, it is now being called Likud Beiteinu or Solidarity Is Our Home — and with post-election Israeli coalition negotiations taking place in their usual Byzantine manner, it’s easy to see why English readers might be confused. Will Yesh Atid and Habayit Hayehudi stick together to keep Likud Beiteinu from going with Shas and Agudat Yisra’el now that Hatnuah has come aboard and Kadima is possibly next?

That’s certainly a mouthful for the English reader — but would it be any better if we asked, “Will There Is a Future and The Jewish Home continue collaborating to prevent Solidarity Is Our Home from signing with the Talmud and United Torah Judaism parties now that it’s finished lining up The Movement with Onward on its heels?”

In fact, however, such linguistic inconsistency has always accompanied the names of Israeli political parties in English. Back in the country’s early days, its ruling socialist party, David Ben-Gurion’s Mapai (a Hebrew acronym for Mifleget Po’alei Eretz-Yisra’el, “the Workers’ Party of the Land of Israel), was called Mapai in English, too, never “the Israel Workers Party” or “the IWP.”

Similarly, its two rivals on the left, Achdut Ha’avodah and Mapam (short for Mifleget ha-Po’alim Ha’me’uḥedet), were also referred to in English by their Hebrew names, never as the “Labor Unity” and “United Workers” parties. And Menachem Begin’s right-wing ḥerut remained Herut in English and did not become the Freedom Party. Yet the centrist Ha-Tsiyonim ha-Klaliyim were always called the General Zionists in English, and — as my anonymous correspondent points out — the 1968 merger of Mapai, Mapam and Achdut ha-Avodah was never anything but the Labor Party.

Go figure. Perhaps “Labor Party” seemed natural in English because “Labor Zionists” was traditionally the inclusive English term for the left-wing Zionist parties, whereas the “Solidarity Party” for the Likud, formed by a merger in 1973 of Herut, the General Zionists (who had meanwhile become the Liberals) and several smaller groups, sounded strange. (The Polish Solidarność didn’t begin to function and get publicity until several years later.) And to speak in English of Yair Lapid’s “There Is a Future Party” definitely would sound strange.

Israel happens to be one of the world’s leaders in the contemporary trend of calling new political parties by catchy phrases, as if they were not movements based on enunciable principles, but commercial products to be marketed. And while it’s a trend that exists in many countries — think of the German party “Pirates” or the new Italian party “Stop the Decline” — it started earlier in Israel than elsewhere.

Indeed, it originated with the country’s system of voting, which has always used paper ballots instead of machines. For the benefit of voters who were functionally illiterate, each ballot was made to bear not only the name of the party to be selected, but also two or three easily recognizable letters. Naturally, parties always tried choosing letters that have positive associations; those of the Labor Party, for example, have traditionally been alef-mem- taf, spelling the word emet, or “truth.”

No one ever called Labor “Emet,” but when the left-leaning Citizens Rights Party was formed in 1973 and chose the letters resh-tsadi — spelling ratz, the verb for “run” — Ratz or “Run” was how the party soon became known to the Israeli public. Similarly, the Democratic Party for Change, founded in 1977, became Dash, or “Regards,” from its letters of daled-shin, and the Sephardic Union of Torah Observers, founded in 1982, was Shas from shin-samakh. (The “Shas” in rabbinic language is a synonym for the Talmud.) And in 1992, when Ratz merged with Mapam, it became Meretz or the “Energy” party.

The next step came in 1996, with former prisoner of Zion Nathan Sharansky’s short-lived Yisra’el b’Aliyah or “Israel Ascending” party, with its pun on the double meaning of aliyah as “ascent” and immigration to Israel. Although Sharansky could have called his new party the Immigrant Party or the Israeli Social Integration Party or something else of the sort, he wanted a name that was snappier — and when his rival for the Russian vote, Avigdor Lieberman, ran on a different Knesset list in 1999, he countered with “Israel Is Our Home.”