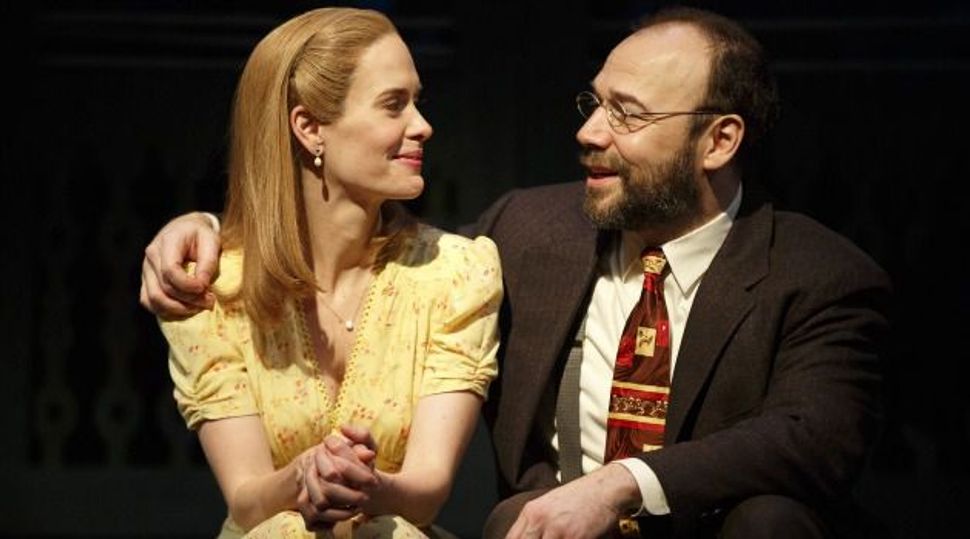 Burstein With Passion: The actor performs a scene with Sarah Paulson in the Roundabout production of ?Talley?s Follly.? Image by Joan Marcus

Danny Burstein insists that the joy of being a father most prepared him, paradoxically enough, for playing Matt Friedman, a desolate figure who refuses to bring children into this world, in the revival of Lanford Wilson’s “Talley’s Folly.”

“Because the love and happiness you get from children is so great, what Matt went through to arrive at that position must have been overwhelming,” the three-time Tony Award nominated actor said in his dressing room at the Roundabout’s Laura Pels Theatre before a performance. “The idea of not passing along the baton to someone else, not leaving something behind… that creates such sadness inside and helps me feel the loss and emptiness of his life.”

“Talley’s Folly” centers on the evolving romance between an emotionally disenfranchised WASP heiress named Sally (Sarah Paulson) and a deeply troubled, heady Jewish Lithuanian refugee (Burstein) in Missouri, 1944. Both are outsiders, though Friedman is clearly the more marginalized, with a tortured past in turn-of-the-century Europe. He witnessed unspeakable atrocities, losing his own parents and sister.

The affable Burstein, who was attempting to finish a sandwich throughout our interview, says he understands what it’s like to feel alienated. Born to a Costa Rican mother and a Jewish father, he was always the odd man out, though he said he identifies most strongly as a Jew. Indeed, he was labeled “Jew” growing up in a blue-collar Irish community in the Bronx and Queens, and the memories cast a long shadow.

His father’s influence in his life was equally potent in shaping his performance. A philosophy professor who introduced young Burstein to plays, theater and other live performances, he lost many members of his family in the Holocaust.

Burstein’s extraordinary performance combines brashness and vulnerability, most pointedly expressed in his recalling the brutal death of his sister. The actor’s throwaway delivery, belying the most profound horror, is a bone-chilling moment, punctuated by a split-second pause before commenting that her death “turned out to be of little consequence, people in Europe being very wasteful.”

Matt’s despair, coupled with the need to cover it up, defines him, which explains why his relationship with Sally is such a watershed. “This is the only time he finally feels something for another person and is able to open up and talk about his experience and be 100% honest with her,” Burstein said. “It’s the first time he’s fallen in love.”

Asked if Sally’s appeal is precisely her “otherness” (the fact that she is an All-American WASP), Burstein acknowledged that element. “But they meet on a higher level — shared intellectualism and emotionalism — that has nothing and everything to do with who they are,” he said. “When it comes down to it, it’s about a man and a woman who share similar values and fall in love, despite society holding them back and saying they shouldn’t be in love.”

Roundabout’s artistic director, Todd Haimes, entered the dressing room to remind Burstein that he would soon be expected at a talkback with theater patrons who had gathered for a preperformance reception.

Taking a few rapid bites of his sandwich, Burstein conceded that he finds talkbacks before a performance somewhat puzzling. Not that he’s complaining. It’s a minor distraction in a seemingly smooth-sailing career. With the exception of one semester of teaching at Queens College, Burstein has worked steadily as an actor nthroughout his adult life.

“As a kid, I made a pact with the devil,” he remarked. “I said I wanted to do good work, and I didn’t care about any of the fame stuff. Why are you looking so skeptical?” he asked me, laughing.

At the moment, though, Burstein’s thoughts are focused on “Talley’s Folly” and on the more unusual challenges he faces, particularly mitigating Matt’s aggressiveness to mesh with the demands of contemporary sensibilities. In 1944, a persistent character like Matt was probably viewed as manly while the object of his affections was flattered. Today, in all likelihood he’d be seen as a nuisance at best. Burstein recognizes the thin line between adhering to the character’s truthfulness and creating a likable figure for a modern audience.

“Yes, we talked about this, but you have to ultimately believe that Sally is someone who is tied up in a spider’s web and Matt is actually clipping the web to release her from the chains of everything that her family represents,” he said, adding that he never worried about Matt appealing to the stereotype of the pushy Jew, either. “I’m always careful to play individuals as opposed to caricatures.”

Consider his subtle approach to representing Friedman’s accent as Continental with a hint of Yiddish. The stumbling block was how much Yiddish inflection he wanted to incorporate.

“This man very much wants to be assimilated,” Burstein said. “He doesn’t want to draw attention to himself; he wants to live under the radar. He doesn’t want to sound overly Jewish or overwhelmingly German, either. Also, he speaks four or five languages, though his first language was probably Lithuanian.” Burstein worked with a dialect coach to meld all the elements. Still, it was challenging, because, he said, Lanford Wilson wrote his dialogue with a “backward syntax, as if it was a foreign language. And the words don’t flow.”

Though he says that the play speaks to all audiences, Burstein says that it may have special resonance for Jews, “who have had a long history of suffering, yet also experienced great triumph, like Matt and Sally. That’s a beautiful image: to come away from a play with its hopefulness for Jews and gentiles alike.”